No One Knows How Many Shipwrecks Exist, So How Do We Find Them?

There is an unknown number of shipwrecks at the bottom of the sea around the world. To find them, researchers must use imagery methods. 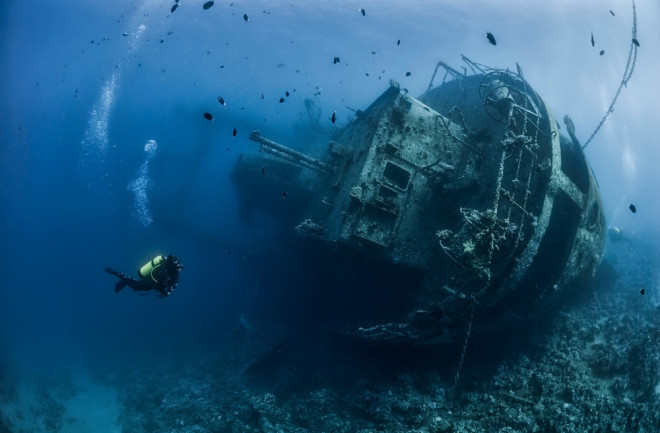 If there are 10,000 estimated shipwrecks in the five Great Lakes, how many shipwrecks are there throughout the Earth’s waters?

“Various people have thrown numbers out,” says Dan Davis, associate professor of classics at Luther College and expert on ancient maritime history. “No one really knows exactly what that number should be.”

Though we might not know how many shipwrecks are out there, it stands to reason that there are many waiting to be discovered. But how do scientists and explorers go about finding them?

While a global number may be out of reach, researchers could quantify shipwrecks on a smaller scale, like in the Mediterranean Sea, where Davis works. Researchers would first have to quantify all variables that go into making a wreck.

For inspiration, Davis is looking to the stars. Davis is using the Drake equation, formulated by Frank Drake to compute the number of advanced alien civilizations in the Milky Way, and applying it to shipwrecks. “I’m trying to do that now […] to account for all the variables,” says Davis. This covers weather and the number of ships built.

Some people just strap on their diving gear and go looking in areas with suspected shipwrecks. This method may be fun, but it’s also inefficient.

It’s like looking for “a needle in twenty football fields of haystacks,” says Leila Character, a postdoctoral researcher in marine archaeology at the University of Delaware. “The way I do this […] is to use imagery.”

The two most common forms this imagery takes are multibeam sonar and side scan sonar. Multibeam sonar is collected by sensors mounted on ships (ones that haven’t sunk to the seafloor, of course).

“The sonar sensor sends pings down to the ocean floor,” says Character, “that create an elevation surface of the seafloor.”

If these pings are really close together, a shipwreck will cause a notable bump in elevation that can spark further investigation. Side scan sonar, meanwhile, is mounted on autonomous underwater vehicles that are remotely piloted (unlike the ones that require a person, like the one acclaimed filmmaker James Cameron was inside).

“It sends out sonar pings that record the density of the material it hits on the seafloor,” says Character. Hard, dense objects, like submerged ships, will stand out on these density maps. Side scan is often paired with a magnetometer, which responds to the presence of iron and measures magnetic forces.

Once researchers collect sonar images, the grueling task of sorting through them to find shipwrecks begins.

Researchers must review right away while still at sea to immediately investigate any interesting objects lurking below. However, machine learning techniques may soon simplify this process — and enable scientists to get more sleep.

By training a computer model, it could recognize “all the different ways that these underwater wrecks can look,” says Character. “Then the next time we go into the field […] we can just run the data we’ve collected [through the model].”

Even with a human spot-checking the model’s performance, this could cut the image analysis time down from eight hours to only twenty minutes (for eight hours of data).

Why Find a Shipwreck?

While shipwrecks rest idly at the bottom of seas around the globe, they don’t sit prominently in many peoples’ minds. For some, however, what lies below the waves has a massive impact on them and their families.

Shipwrecks from World War II can contain “the remains of many, many missing in action Navy members,” says Character. “As a family member, […] I certainly might be really invested if we were able to turn up some information about where [missing relatives] might have gone down and where [their] final resting place is.”

Raising public awareness of shipwrecks could benefit the ships themselves, since shipwrecks, both modern and ancient, are at risk. “Shipwrecks are highly endangered as a cultural resource,” says Davis, “mostly because of trawling.”

For fishing, boats tow trawl nets along the sea floor, which can damage the wrecks. And policies that protect shipwrecks are effective, but still sorely lacking in many places.

“I wish the public would become more aware of it, and help pass laws that could protect that cultural resource,” says Davis.

Not every shipwreck can capture the public imagination like the Titanic or the SS Edmund Fitzgerald, and proactive marine protection policies can help preserve the untold human heritage slumbering on the seabed.