Just How Intelligent Are Dolphins?

Language, culture, self-awareness, and brain size contribute to some of our closest competitors in the cognition arena. 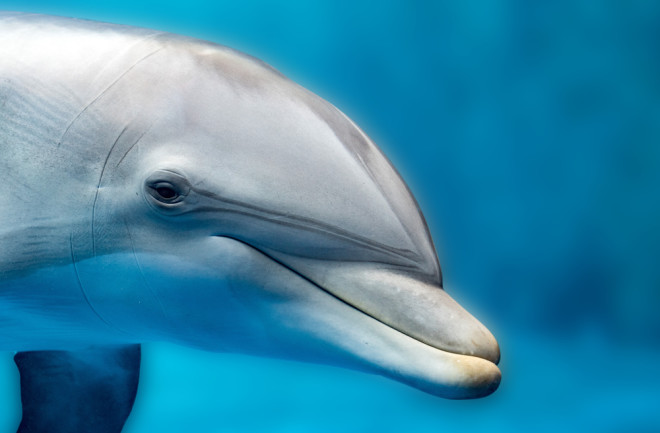 Animal intelligence is an oft-disputed and highly subjective topic. The discussion sometimes revolves around the smartest dog breeds, just how capable chimpanzees are of acting like humans or what kind of problems an octopus can solve. But dolphins come up again and again as one of the most gifted species on the planet.

In fact, they are sometimes cited as being the second sharpest animals on the planet after ourselves, though it should be noted that Douglas Adams clocked humans just after the marine mammals at third place.

“Man has always assumed that he is more intelligent than dolphins because he has achieved so much — the wheel, New York, wars and so on — while all the dolphins had ever done was muck about in the water having a good time,” the science fiction writer wrote in his book So Long and Thanks for all the Fish. “But, conversely, the dolphins had always believed that they were far more intelligent than man — for precisely the same reasons.”

Jokes aside, there are a lot of reasons to give dolphins credit. The small cetaceans have highly developed language abilities and can learn complicated tricks while acting on TV shows. Dolphins have served the U.S. and Russian navies and some believe they can even sense cancer tumors, though the science has yet to back up this myth.

“They have culture, they use tools, they have complex societies,” says Neuroscientist Lori Marino, the president of The Whale Sanctuary Project who has studied dolphin brains and intelligence for 30 years. “These animals are very much like us because of their social complexities, their behavior, their level of self-awareness.”

What leads some to believe they are the second smartest creatures?

Simply put, it’s about relative brain size. Sperm whales may have the biggest brain sizes of any creature living on the planet, weighing up to 20 pounds according to the American Museum of Natural History in New York City. But sperm whales are also massive animals that require more computing power for basic tasks like movement.

In one study in 2002, Marino and her colleagues examined the relative brain size of a dolphin compared to body mass — something known as the encephalization quotient. They compared dolphin encephalization quotients to those of other famously smart animals like chimpanzees, humans, gorillas and orangutans. They found that humans came in the highest, followed by several species of dolphins: Tuxuxi, white-sided, common, and bottlenose. The encephalization quotient of these dolphins weren’t that far off from Homo habilus, a close human ancestor, the study noted. It was much higher than sperm whales.

“Their brains are oversized,” Marino says. But she adds that researchers are now trying to get away from the idea of ranking different animals based on brain size. Octopi, for example, may not be as high in the encephalization quotient as some of their competitors, but the cephalopods have excelled at a great number of problem-solving tasks researchers have thrown at them.

Brain size alone doesn’t mark intelligence, though — and Thewissen says that he believes part of this jump in delphinids and other cetaceans likely occurred as their ancestors developed the capacity to use echolocation to hunt their prey.

A Mirror for Our Own Brains

Learning to understand dolphins sometimes entails understanding our own way of thinking about things.

“We’ve always known they’re smart, going back thousands of years,” Marino says, adding that observations of their curiosity go back at least to ancient Greece.

The first scientific attempts to assess dolphin intelligence in a serious way came in the 1950s and 1960s with John Lilly, a scientist that studied bottlenose dolphin vocalization. Lilly’s early work laid the groundwork for studying dolphin brains and intelligence.

The trouble is, the questionable ethics of some of his experiments often overshadows that work and led to a drought on serious research on dolphin smarts that lasted for years, Marino says. Lilly is also a counterculture figure, involved with psychedelic drug experiments with figures like the psychologist Timothy Leary and beat poet Allen Ginsberg. These experiments spilled over into his research on marine mammals, and he began administering LSD to dolphins in an effort to communicate with them.

Eventually, researchers began to study dolphin intelligence again. Research by Marino published in 2001 showed that dolphins recognize themselves in the mirror. She and her colleagues made spots on different parts of dolphin bodies using markers then observed the creatures going to look at that specific spot in a mirror placed in their tanks. Only a few other species like chimpanzees have been shown to exhibit this type of self-awareness.

“That was the first time cetaceans were shown to have that capacity, which was thought to be limited to humans and our closest relatives,” she says. “That’s something that most animals don’t do.”

Other studies have shown that dolphins can be taught to understand basic symbols created by humans, and even full sentences such as “bring the ball to the hoop.”

The trouble with many of these tests is that they occur in captive settings. Just as some humans are fascinated with understanding dolphin intelligence, others have worked to exploit it, whether in the form of dolphin shows at popular aquariums, TV shows, or even for military uses.

Captive settings don’t really reflect the situations dolphins evolved to thrive in. Studying dolphins by giving them human-built tests in a lab isn’t necessarily a great reflection of a dolphin’s ability to out-think what nature throws at them. As a result, Marino has begun to get away from working with captive dolphins.

“A lot of the really interesting work being done here is in the wild,” she says.

While understanding their behavior is much more complex in the wild, researchers have still observed a great deal of intelligent behavior in the cetaceans. Bottlenose dolphins off the coast of Western Australia have been observed using sea sponges as snout protecting tools while rooting around in the sand on the seafloor for fish. Others hunt by encircling fish with mud nets, and dolphins in Brazil have learned to hunt cooperatively with village fishermen in southern Brazil.

LSD experiments aside, studies in the wild have even shown some dolphins may have very human-like shortcomings. It’s still unclear whether it’s purposeful or a habit, but observations have shown dolphins poking pufferfish and entering a trance-like state of intoxication after presumably ingesting the potent neurotoxins produced by the fish.

“They show us there is more than one complex intelligence on the planet,” Marino says.