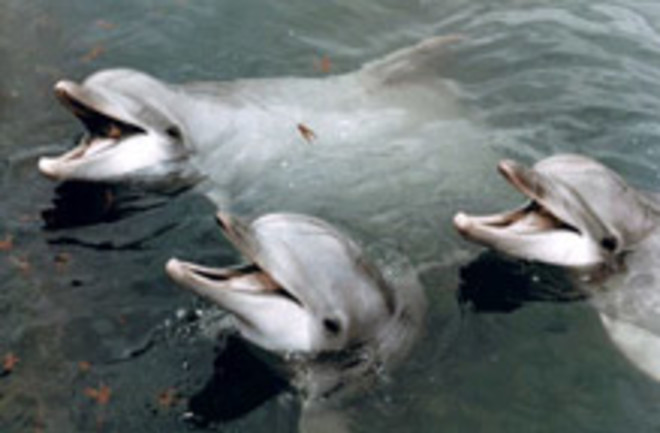 If the U.S. Navy has its way, dolphins and sea lions will soon be patrolling Puget Sound to protect some of the nation's most sophisticated submarines from possible terrorist attacks. But although the animals have already been through boot camp and are on the job in other parts of the world, Washington State animal lovers and environmentalists are concerned that dolphins and sea lions are ill-suited for conditions in Puget Sound.

Animal rights activists are worried dolphins will suffer in the cold waters and environmentalists worry the local habitat may suffer from the droppings of these patrollers [MSNBC].

The Navy is currently holding public hearings in Seattle and towns along the Puget Sound, and has said it will make a decision by October. The Navy says dolphins and sea lions make great marine sentries, and are more capable of detecting a lone diver approaching a submarine than the most advanced technology. "Their strengths are that they are a mobile sensor: They have the best sensor we know about, and you can have them swim anywhere in the bay. They can outswim any man, they can localize the threat, and they can combine with the sea lions, which have good directional hearing" [Los Angeles Times], says Steve Hugueley, who works with dolphin patrollers at a submarine base in southeast Georgia. The trained marine mammals would work at night in cooperation with handlers in small boats.

The dolphins would alert the handler if they noticed an intruder. The handler would then place a strobe light on a dolphin's nose, and the creature would return and bump the intruder, causing the light to come free and float to the surface. Guards would then find and subdue the intruder. Sea lions would be trained to carry in their mouths a special cuff attached to a long rope and clamp the cuff around the leg of a suspicious swimmer, who then could be reeled in for questioning [MSNBC].

But despite their evident skills, protesters say the dolphins just don't belong in northern Pacific waters. The

Protesters also note that some of the dolphins that the Navy plans to deploy originally came from the Caribbean, where waters are warmer still. Last year, an activist group called Knitting for Dolphins brought a burst of attention to the debate by offering to knit warm sweaters for the chilled beasts. Now that questions are also being raised about the effect of dolphin droppings on the sound's ecosystem, the knitters have offered to make diapers as well. The Navy argues that it has trained dolphins in the cold waters off Alaska and Norway, and that the animals suffered no ill effects. In a concession, it has offered to warm the waters in the dolphins' holding pens when temperatures drop below a certain level. But no word yet on the military's stance on dolphin diapers. Related Content: 80beats: Sponge-Wielding Dolphins Teach Their Daughters How to Use Tools 80beats: Why Michael Phelps Will Never Swim Faster Than a DolphinImage: U.S. Navy Marine Mammal Program