A new study examines how the ocean food chain recovered in the aftermath of the dino-killing asteroid impact by sampling fossils of single-celled creatures called planktonic foraminifera. 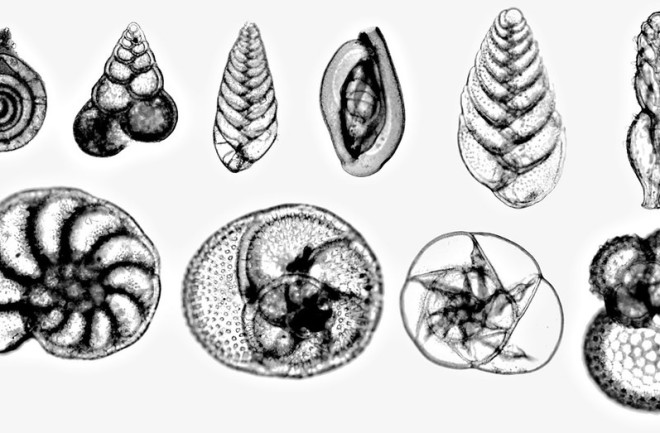 Some 66 million years ago, a city-sized asteroid struck off the coast of Mexico’s Yucatan Peninsula, killing 75 percent of life on Earth, including the non-avian dinosaurs. The space rock left a roughly 100-mile-wide crater and destroyed global ecosystems.

Now, a new study shows that it took more than 10 million years of evolution before biodiversity recovered. And the scientists behind the study say their find carries a grave warning for our current era of human-caused extinction, dubbed the Anthropocene. It shows that biodiversity will need millions of years to recover from the damage currently being done.

In the decades since the Chicxulub impact crater was first discovered, many minute details of the event have been studied and debated. Yet the aftermath — and how life recovered — has remained something of a mystery.

Many fossil finds hint life bounced back not long after the cataclysm subsided, which took somewhere between decades and thousands of years. For example, a surge in fern spores hints at an epic bloom in understory plants, which still grow in the aftermath of wildfires today. And microbes quickly reappeared even in the Chicxulub impact crater itself. And we know that birds descended from avian dinosaurs who survived the fallout. Our own mammalian ancestors also rode it out.

But now a pair of researchers have a new piece of evidence to add to the puzzle. Some 20 years ago, scientists first noticed that there seemed to be a "speed limit" to how fast new species appeared on Earth to replace the ones lost in a mass extinction. And some had suspected that delay could be caused by environmental factors. But that didn't make sense to Christopher Lowery of the University of Texas at Austin, an expert in ancient ocean environments, who was part of the recent expedition that drilled the Chicxulub impact crater.

“We know a lot of the environmental circumstances weren’t that long lasting,” he says. That curiosity prompted Lowery and a colleague, Andrew Fraass, of the University of Bristol, to take another look. What they found is that evolution itself seems to put a firm speed limit on the recovery.

Lowery and Fraass' evidence comes from tiny fossils called foraminifera, or just “forams.” These are single-celled animals with hard, tiny shells that have been around for more than half a billion years. The microfossils are often used as a quick way to deduce the age of a rock. Different forams have different shapes, and they occupied distinct geological eras.

Lowery and Frass had a different use for them. They sampled forams to reconstruct their populations in great detail before and after the asteroid hit, looking for changes. And forams' abundance makes it much easier to do a large survey than trying to hunt down a vast array of large animals fossils.

“For this kind of work, if you go to an outcrop and look for dinosaurs, you’re gonna find a couple specimens here and there,” Lowery says. “Whereas with microsossils, if you take an ocean core that’s a couple inches wide and take slices out of it that are an inch thick, you'll find thousands of foraminifera.”

These tiny animals are also important because they form the base of a food chain, so they should be representative of larger trends at the time. “We expect to see the same relationships — predator and prey — in the larger macro world of fish and jellyfish and sharks and other animals,” Lowery says. What they found is that while some forams do reappear soon after the extinction event, broader biodiversity in their species numbers needed at least 10 million years to recover. And, incredibly, forams have still never recovered the biodiversity they once had.

Lowery says the overall implication defies conventional wisdom, which holds that new species will come in after an extinction event and occupy the environmental niche that was abandoned. But that's not possible if there's no ecological niche to be filled. He points to ammonites as an example.

These shelled relatives of the modern nautilus were abundant for more than 100 million years before famously disappearing along with the non-avian dinosaurs. Ammonites were eaten by many creatures, including plesiosaurs, a kind of giant swimming reptile. And ammonites themselves fed on shrimp and other small sea animals, which in turn ate plankton and even smaller critters.

But plesiosaurs and ammonites — and much of their food — died after the asteroid strike. An entire ecosystem had to re-evolve to replace what existed before. “It’s a fundamental speed limit on evolution,” Lowery says. “This is just how long evolution takes to develop these niches.”

For a modern-day analogy of this kind of biodiversity loss, he turns to grasslands, bursting with and elk and deer and predators. “You could wipe all those out and just have cows,” Lowery says, “and they’re just eating and doing the same thing with the same number of organisms. But it would be much less diverse."

And that’s what Earth is looking at in its future, too. “We’re currently experiencing a major loss of diversity,” he adds. “You’re going to have this same thing where you have a long lull in recovery, so even if we clean everything up and get the carbon out of the atmosphere, it’s still going to take millions of years to rebuild.” The research was published Monday in the journal Nature Ecology and Evolution.