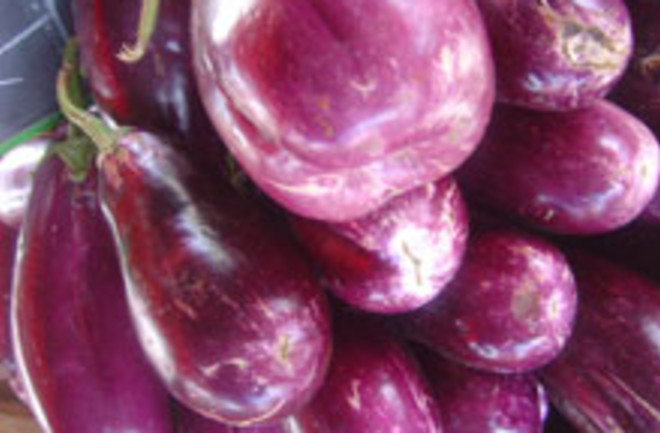 After much debate over balancing the need for independent scientific testing and the needs of poor Indian farmers, the Indian government has decided to put on hold the introduction of genetically modified eggplant in the country.

the expansion of seed makers including Monsanto Co. in the world’s second-most populous nation [BusinessWeek]. The government said there was no overriding food security argument for GM eggplant, and added that more safety studies needed to be done before the ban could be reconsidered.

There is little evidence that GMO eggplant would cause harm to people eating it, but the crop is consumed very often in India, and some scientists and regulators argued that they needed more proof that long-term consumption wouldn't cause a problem.

The eggplant had been genetically modified by introducing a gene called cry1Ac from the soil bacterium Bacillus thuringiensis, or Bt. The gene instructs the plant to produce a protein toxic to certain insects, so the GM eggplants would have been able to fend off common borer pests. The Bt was sourced from Monsanto, which already sells Bt corn and Bt cotton seeds in the United States. In the 1990s, Monsanto triggered a huge debate in India by introducing genetically modified cotton. Alhough the GM eggplant (or brinjal, as it is called in India) was cleared by a federal agency, the Genetic Engineering Approval Committee (GEAC), the government put the roll-out on hold. Ramesh also

"It is my duty to adopt a cautious, precautionary principle-based approach and impose a moratorium on the release of Bt Brinjal till such time independent scientific studies establish, to the satisfaction of both the public and professionals, the safety of the product" [Daily News and Analysis],

said the environment minister, Jairam Ramesh, who delivered the announcement.