Two new fissures have opened near Geldingadalir and these new eruption could be a sign of things to come in Iceland. 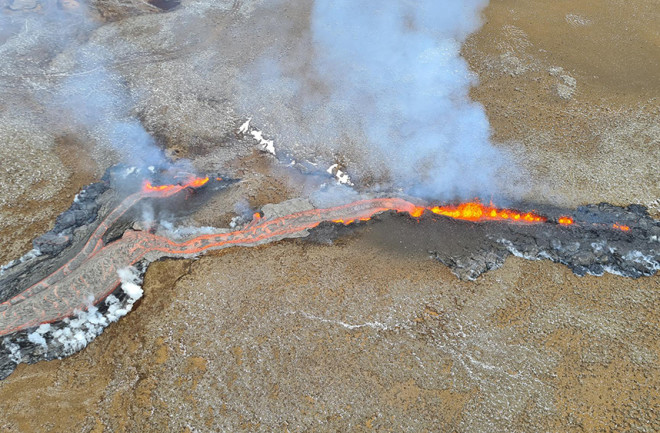 The second fissure that opened during the Geldingadalir eruption in Iceland, seen on April 5, 2021. Credit: Icelandic Meteorological Office.

A few weeks ago, the Reykjanes Peninsula saw its first eruption on land in centuries. The new eruption at Geldingadalir continues to produce an impressive cone and snaking lava flows but the eruption wasn't done there. New vents have now opened northeast of the original, bringing the total to three spots where lava is spilling out. These eruptions still don't pose any danger to Reykjavík beyond potential irritation due to the gases being emitted, but they have produced some of the biggest volcanic tourist draws in decades (for better or worse).

The first of the new fissures opened about a kilometer away from the original Geldingadalir vent. These fissures are a few hundred meters long and are sending lava down some narrow valleys away from the eruption site. As this lava reached flatter ground, it has spread out to form an impressive lava delta that can be seen in the RUV.is webcam view of Meradalir. Some spectacular drone footage was taken of the new fissure that shows the narrow tongue of lava rolling down the valleys.

A new lava flow snaking down a valley from the new Meradalir eruption site in Iceland, seen on April 5, 2021. Credit: Icelandic Meteorological Office.

Late last night (April 7), another fissure opened in between the first and second eruption site. Thanks to some snowy conditions in the area right now, no good images exist yet of this new eruption site, but it is producing the same style of basaltic lava flows and spatter as the first two areas. The Icelandic Meteorological Office published a map today showing the layout of the three eruption sites that shows how much of the valley the original eruption has filled and how far the new lava flows have travelled.

A map showing the vent locations and areas covered by lava during the Reykjanes Peninsula eruption of 2021. Credit: Icelandic Meteorological Office.

With all this impressive volcanic activity, many tourists have attempted the trek out to the eruption site. While this might seem reasonable, the opening of the new fissures show just how quickly the situation can change in a volcanically-active area and it prompted evacuations after the new fissures opened.

Right now, the IMO estimates that about 265 million cubic feet (7.5 million cubic meters) of lava have erupted from all the vents. That's enough to cover 100 soccer fields with 2 feet of lava!

More Lava and More to Come?

This style of multiple eruption sites and fissures all erupting at once is typical for eruptions like this. We've seen it before at places like Kīlauea in Hawai'i or Piton de la Fournaise on Reunion Island. Both of these volcanoes erupt this lovely, runny basaltic lava that, as it rises, just looks for the easier path to the surface. All of this activity might just be the opening salvo of months to years of new eruption on the Reykjanes Peninsula.

Iceland isn't the only place on Earth experiencing lava flows right now. Pacaya in Guatemala has been producing lava flows that stretch a few miles from the summit of the volcano. These flows are more hazardous as many more people live near Pacaya than the site of the Icelandic eruption. Over in Hawai'i, the lava lake that started to form at the summit of Kīlauea in December 2020 is also still going strong. Estimates place the depth of the lava lake at over 700 feet now.