New Eruption Finally Starts on the Reykjanes Peninsula in Iceland

The first eruption on the peninsula in over 1,200 years is a small one (so far), but has produced spectacular lava flows. 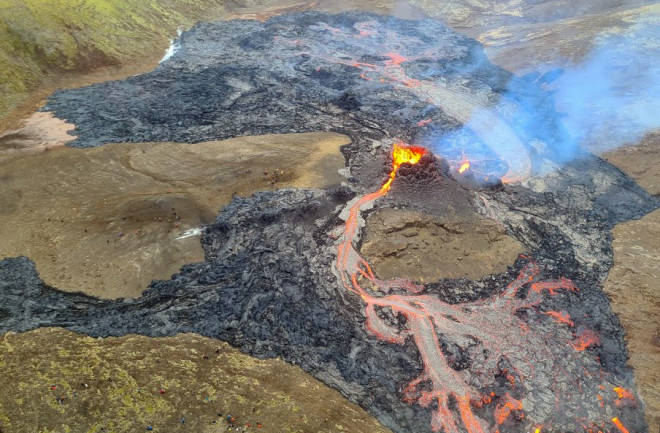 The new vent at Geldingadalur in Iceland a few days after the eruption started on March 19, 2021. Credit: Civil Protection and Emergency Management Agency.

It might have taken a couple weeks longer to start than initially thought, but the eruption that had been forecast on the Reykjanes Peninsula in Iceland finally started late Friday night. A fissure that measured a few hundred feet long opened and small lava fountains started erupting red-hot basaltic lava that formed short flows. Over the course of the next day, the eruption coalesced to form a spatter cone (more on that below) that sporadically collapsed, sending lava rushing from the vent. By Monday morning, the eruption was still going but at a slower rate than the initial salvo.

The Icelandic Meteorological Office reports that so far, the lava flows have covered a few hundred acres in a valley ~2 miles from the coast -- a spot known as Geldingadalur. It isn't too far from Reykjavík and the glow from the eruption could be seen on the horizon. The volcanic sulfur dioxide from the eruption could also cause some breathing irritation for places downwind of the eruption. So, unlike other Icelandic eruption of the past, there is very little chance of this one causing any aviation disruptions.

The eruption has built a spatter cone, which is close to what the name implies. As lava is eruption and thrown out of the vent, it builds up a loose cone of cooled lava. These can quickly grow to hundreds of feet tall, but they aren't too sturdy. This has lead to collapses of the cone during the course of the eruption.

Drone Footage of the Eruption

With the eruptions close proximity to a city, there have been a lot of a people visiting the eruption. This has lead to some impressive and sometimes frightening footage. Most spectular is this drone VR image of the eruption area where you can clearly see the growing spatter cone, the lava flows in their channels moving away from the vent (and how close people are getting to the lava!) Be sure to drag the image around to see how the lava flows have spread over the last few days.

This drone video shows the main channel of lava and eventually the vent itself. Most of the lava eruption is likely close to 1200C (2100F). What's most impressive are some of the shots from directly above the vent where you can clearly see just how fragile the spatter cone is, with lava flows issuing from both sides. The spattering nature of the vents is also quite evidence. When they pull back, the night footage shows the other smaller vents that are still active as well.

More Hazardous Than It Seems

This brief video shows a collapse of the spatter cone and the sounds of people shrieking like they are on a ride at an amusement park ... maybe not the best idea to be so close to such an event. What might, at first, seem like a fairly benign eruption away from any population may actually be a more hazardous to "volcano tourists" than you might imagine.

Any time you have lava flowing over wet land, you have the potential for steam explosions. On top of that, the tendency for the weakly-built spatter cone to collapse means lava might rush down slope. The eruption's location in a closed valleys also elevates the risk that toxic volcanic gases could build up near the vent. All in all, it isn't a safe place to visit in person.

Volcanologists have been installing monitoring equipment near the new vent so we can keep an eye on all the activity. It turns out the eruption site is near a potential Viking burial mound as well, so archeologists have had to rush in to try to evacuate the mount lest it be buried forever by lava.

With the start of the eruption, the threat of earthquakes has diminished for now as pressure has been let off in the area. However, the IMO warns that nearby areas could feel earthquakes if more magma rises up under Geldingadalur.

All in all, this eruption is the best most volcanologist could hope for: small, relatively safe to the local area and on a stretch of the Mid-Atlantic Ridge that hasn't seen an eruption in 1,200 years. Even though it has been over a millennium since the last eruption on the peninsula, there is some speculation that the recent spates of earthquakes and this new eruption signal the start of a new active period for the Reykjanes Peninsula volcanoes.