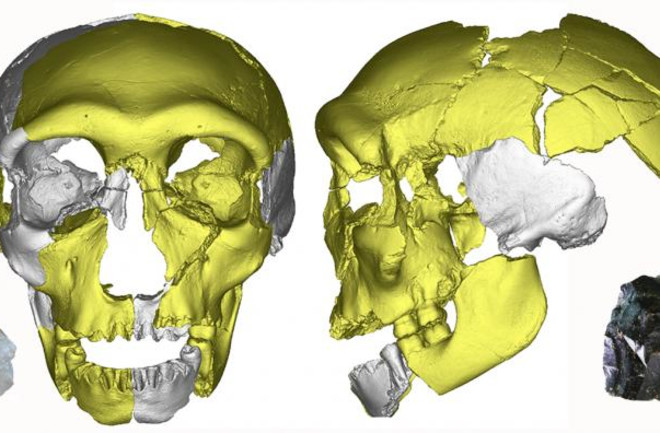 Researchers created a virtual reconstruction of the mostly complete Hualongdong skull (yellow) by mirror-imaging the missing pieces (gray). Stone tools found at the site appear in lower corners of the image. (Credit: Wu Xiujie) A largely complete, roughly 300,000-year-old skull from southeastern China appears to be the latest evidence challenging the dominant model of human evolution. The Hualongdong skull's unique combination of features make the fossil a tantalizing clue to East Asia's diverse hominin history. Researchers excavating a collapsed cave site unearthed the skull, formally known as Hualongdong 6 (HLD 6), along with additional partial fossils of archaic humans and animals, plus assorted stone tools, over the last decade or so. Using the ages of surrounding mineral deposits and other material in the cave, the team determined the skull and other remains were about 300,000 years old. Unlike many East Asian archaic human fossils, which are often fragmentary, the Hualongdong skull is nearly complete, and in decent shape, allowing the team to draw some firm conclusions about its anatomy. And that's where things get really interesting. Traits That Are Not Straightforward HLD 6 exhibits a suite of traits consistent with other archaic human remains from East Asia, such as a low and wide cranial vault (sometimes imprecisely called the skullcap), a low and wide nasal aperture (the pear-shaped opening in the skull for a schnoz) and reduced or absent third molars. However, the Hualongdong skull also has a few features that seem transitional toward anatomically modern humans (AMHs). Unlike the chinless, projecting faces of archaic humans and their ancestors, HLD 6 had a relatively flat face and somewhat of a chin. The evolution of the chin has long been debated in paleoanthropology circles, but everyone agrees only Homo sapiens have prominent ones. HLD 6 is not the first East Asian skull to sport an unusual combination of traits. For example, the partial Xuchang skulls from Central China, at least 100,000 years old, have a different collection of mosaic traits, blending archaic and modern human anatomy with that of Neanderthals. The Hualongdong fossils are also by no means the oldest hominin remains found in East Asia; multiple specimens of Homo erectus and related lineages have been unearthed going back more than 1.6 million years. A 2018 study of more than 100 tools from Shangchen suggested that archaic hominins were in China 2.1 million years ago, though no hominin fossils of that age have turned up (yet). So, while it's not a shocking find, HLD 6 is still significant. To understand why, we have to wade into one of the more contentious debates in human evolution. From Many, One? Or From One, Many? For decades, particularly in the West, the Recent African Origin model of human evolution (RAO) has dominated. According to this hypothesis, AMHs evolved in Africa and then, in the last 50,000-80,000 or so years, spread out across Eurasia, displacing or absorbing any isolated populations of archaic humans still hanging on. Over the last decade, new fossil finds outside Africa have pushed back the dispersal date, though not all RAO proponents accept evidence of an earlier departure. Staunch advocates of the long-standing theory typically consider finds such as Israel's Misliya-1 partial jaw, at least 170,000 years old, as evidence only that a couple AMHs may have wandered out of Africa super early but didn't get very far. Meanwhile, an alternate model of human evolution, Multiregionalism or Regional Continuity, has gained traction, particularly in East Asia. According to multiregionalists, when H. erectus left Africa almost 2 million years ago, these early explorers didn't die out. They fanned out across Eurasia and continued to evolve, eventually becoming regional populations of H. sapiensbefore other populations of H. sapiens left Africa. The differences between the models may seem insignificant to outsiders — for example, both models acknowledge interbreeding occurred in the last 100,000 years between the various populations of archaic and modern humans — but these competing paths of human evolution disagree over some of the core issues of our deep past, including how we define a species and what makes us human. In the last two years, some researchers have proposed a third model that tries to reconcile the dueling models and the expanding fossil record, acknowledging the complexity of our origin story. So let's get back to HLD 6. The skull has some traits that are consistent with other archaic members of the genus Homo that have been found in East Asia. It also has features that hint at traits unique to AMHs, which have not been found outside of Africa earlier than about 180,000 years ago (and that's the Misliya-1 fossil, found in Israel, essentially on the edge of the African continent). At about 300,000 years old, HLD 6 may be evidence of regional continuity, a transitional human that represents the evolution of archaic East Asian H. erectus populations into East Asian AMHs. Or, quite frankly, HLD 6 may simply be an anomaly, an archaic hominin with some quirky variations. Until researchers find more fossils, the Hualongdong skull will probably be interpreted according to whatever bias you bring to the table. The HLD 6 study was published in Proceedings of the National Academy of Sciences (PNAS).

A more colorful reconstruction of the Hualongdong skull overlays the collapsed cave site in southeastern China where it was found. (Credit: Wu Xiujie and Erik Trinkaus)