How “Snowball Earth” Could Have Triggered the Rise of Life 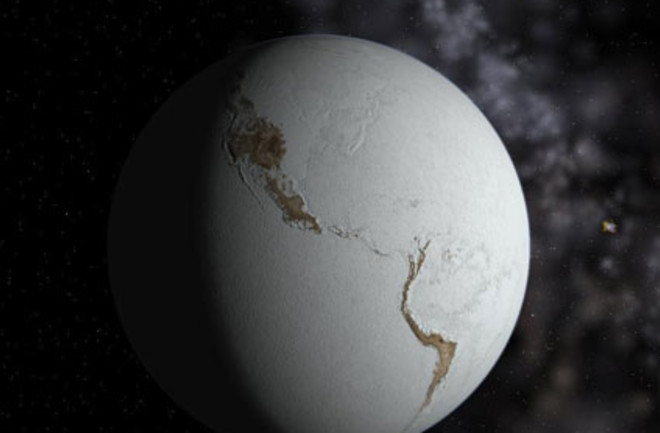 The retreat of the ice covering "Snowball Earth" 700 million years ago might have been the key to the Cambrian explosion that seeded our planet with diverse forms of life. But the trigger may not have been the changes to the climate, but rather the release of phosphorus into the ocean. During this time period, called the Cryogenian or Snowball Earth stage, the entire planet was covered in snow and ice, and the oceans may even have been frozen. Many researchers believe that the ice receded twice during this freezing period, first around 700 million years ago and then again around 635 million years ago. In a paper published in Nature this week, a team of researchers propose that these receding sheets released phosphorus into the oceans.

In the scheme offered by [Noah] Planavsky and his colleagues, the snowball ice sheets would, as their modern counterparts do, grind up continental rock that would release phosphorus when the glaciers retreated. That phosphorus would wash into the ocean, where it would fertilize algal blooms that could drive a surge in the production of organic matter and oxygen. And the added organic matter that settled into the mud on the ocean bottom would leave additional oxygen behind, eventually boosting atmospheric and oceanic oxygen. [ScienceNOW]

Phosphorus isn't usually present in the oceans in high concentrations, but it is essential, so it is often the piece missing from the algal growth equation. To figure out if phosphorus levels rose before the Cambrian explosion, the researchers, lead by Planavsky, studied marine core samples from around the world.

"Gathering samples for this study was a long endeavor," recalled researcher Noah Planavsky, a biogeochemist at California-Riverside. "Cars will get stuck in mud, flat tires are unavoidable, and old maps can lead you wandering for hours. It is essential to accept that you could spend days traveling to sample some rocks, sometimes halfway across the world, and find nothing useful for your study." [LiveScience]

What they got from this world-trudging was evidence for a spike in phosphorus levels in the oceans that occurred between 635 and 750 million years ago, about the time of the recession of Snowball Earth's ice sheets.

"We have potentially found the smoking gun for the mechanism that drove the oxygen increase that ushered in the first animals," said researcher Timothy Lyons, another biogeochemist at California-Riverside. "Our results may be the first to capture the nutrient driver that was behind this major step in the history of life, and that driver was ultimately tied to the extreme climate of the period." [LiveScience]

Some researchers disagree with this model, because phosphorus has a limited lifetime in the ocean, and because some believe there was only a single thawing of Snowball Earth. In order to have a strong impact on ocean life, critics say, the levels of phosphorus in the ocean would need to be elevated for longer than could be attributed to a single thaw. But Planavsky argues that even if there was just one thawing event, ice sheets would have moved back and forth repeatedly during the warming, and phosphorus would have been released continually over millions of years. That would have kept the phosphorus levels high, he says, spurring life in the oceans. Other researchers are interested, but not yet convinced.

A phosphorus link between glaciations and oxygen, and therefore evolution, "is a fascinating possibility," says biogeochemist Donald Canfield of the University of Southern Denmark in Odense. "But they don't yet have the continuous [geologic] record that would prove it. In principle, it's a testable hypothesis; that's the work's value." [ScienceNOW]

Related content: 80beats: Why Didn’t the Young Earth Freeze Into an Ice Ball?

80beats: A Monstrous Methane Belch Once Warmed the Earth

80beats: One of the Earth’s Earliest Animals Left Behind “Chemical Fossils”