One of the Earth's Earliest Animals Left Behind "Chemical Fossils" 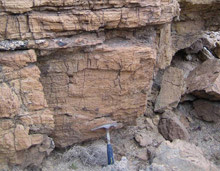 The chemical traces of primitive sea sponges have been found in rocks dating from 635 million years ago, and researchers say it's the earliest definitive evidence of animal life yet. The finding pushes the origin of animal life back to a truly inhospitable epoch known as the Cryogenian, when glaciers rolled across the planet and ice may have frozen over the seas, and when the deep ocean didn't yet contain oxygen. Yet somehow, early sponges known as demosponges thrived in that environment. Says lead researcher Gordon Love:

"We're not saying we captured the first animal; we're saying they're an early animal phylum and we're capturing them when their biomass was significant" [BBC News].

Researchers can usually determine the presence of ancient life in rock strata by looking for the fossilised remains of skeletons or the hardened record of the creatures' movements, such as their footprints or crawl marks. But for organisms deep in geological history that were extremely small and soft bodied, scientists have had to develop novel techniques to uncover their existence [BBC News].

Love says the early demosponges were only a few millimeters in diameter, but they still left their mark in the form of "chemical fossils." In rocks from an Oman oil field, researchers detected a chemical produced when the cell membranes of sponges break down. The findings, published in Nature [subscription required], are intriguing to scientists because they place the origin of animal life before the end of the Marinoan glaciation, a global deep freeze that is sometimes referred to as "snowball Earth."

The new results suggest that even if glaciers reached the equator during the ... ice age, it is likely that warm pockets, perhaps created by volcanic activity or hydrothermal vents, may have persisted and harbored life [Science News].

Researchers think the demosponges must have evolved in shallow ocean basins, because the deeper oceans didn't yet contain oxygen. The animal pioneers did have one advantage, researchers say

—a lack of predators made life easier for the sponges. "There was no competition from more complicated animals, so sponges were probably thriving," Love said [National Geographic News].

Although scientists are still debating what the last common ancestor of all animals was, the new study proves that animal life was already evolving 100 million years before the biotic outburst known as the Cambrian explosion when the fossil record is suddenly thick with animal life of all kind. The early appearance of demosponges indicates that

animals appeared on Earth slowly, as Darwin suspected, and not suddenly and spectacularly, as the fossil record seems to show [ScienceNOW Daily News].