How light or dark is Barack Obama's skin? Depends on your political stance...

In the early days of the last US elections, Hillary Clinton's campaign was accused of deliberately darkening Barack Obama's skin in a TV ad. The implication was that by highlighting Obama's "blackness", Clinton's camp was trying to exploit negative associations that voters might have with darker skin. But you don't need editing software to do that - a fascinating new study suggest that people literally change the way they see a mixed-race politician, depending on whether the candidate represents their own political views.

Liberal American students tend to think that lighter photos of Barack Obama are more typical of him, while conservatives think he's best represented by darker photos. You can see this effect even after adjusting for any racial prejudices, be they hidden or overt, and even with a person less famous than Obama. And regardless of political views, people who associated Obama with lightened photos were most likely to vote for him.

Eugene Caruso from the University of Chicago, who led the study, thinks that this effect is the result of two biases: the positive associations of white and lightness among some Western cultures; and the tendency to view people of the same group (political or otherwise) more favourably than those of another group. He says, "Group membership provides a lens through which people generate representations of reality."

Caruso asked 221 students about their political ideologies and then showed them three photos of Obama and three of John McCain. On the grounds that some photos can capture the "true essence" of a politician better than others, the students were asked to rate how well each photo represented each man. But unbeknownst to them, two of each set of pictures had been altered with Photoshop, so that the subject's skin tone was either lighter or darker.

When it came to McCain, the students' political leanings had no bearing on their choice of photos. For Obama, it was a different matter - liberal students were more likely to pick the lightened photo as the one that represented him best. Conservative students were more than twice as likely to associate him with the darkened photo. These biases were reflected in the students' votes. Whether liberal or conservative, the more people associated Obama with the lightened photo, the more they were likely to vote for him.

Of course, this effect could simply be down to racism - people who harbour prejudices against Blacks would be more likely to associate Obama with a darker photo and less likely to vote for him. But Caruso accounted for that - he repeated the experiment with 49 people a week before the last election and specifically evaluated the recruits' attitudes on race.

Each of them filled in a questionnaire called the Attitudes Toward Blacks scale, which asked them whether they agreed with statements such as "Generally, Blacks are not as smart as Whites." Obviously, people can lie on these questionnaires, so each volunteer also did an "implicit association test" (IAT), designed to reveal any hidden prejudices (try one here).

The same patterns emerged as before and this time, Caruso found that they remained even after adjusting for racial attitudes, both hidden and explicit. A week after the election, Caruso caught up with his recruits and confirmed that those who thought the lightened photos represented Obama were actually more likely to have voted for him. Those who linked him to the darkened photo were more likely to have voted for McCain. Amazingly, the photo effect turned out to be a better indicator of voting choice than the scores on either of the two prejudice tests.

Barack Obama's fame is perhaps a bit of a distractor since people can judge him on his policies, personality and more than just his skin colour. But Caruso found the same effect using a non-celebrity. He asked 102 students about their views on important educational issues and then showed them three photos of a man allegedly running for a position in the US Department of Education. He told them that the mystery politician either agreed or disagreed with most of their stances. 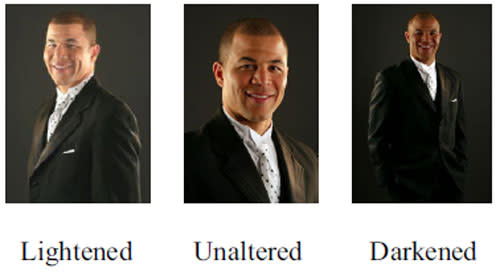 But Caruso kept two important things from the recruits. First, the 'politician' was actually Jarome Iginla, a mixed-race ice hockey player whose father was a Black Nigerian and whose mother was a White American. None of the students twigged to this. Secondly, as before, some of the photos had been doctored so that Iginla's skin tone was either lighter or darker.

The same trend emerged. Caruso found that students who were told that the politician supported their views were more than twice as likely to pick the lightened photo as the most representative one. Those who thought that Iginla disagreed with them were more likely to associate him with the darkened photo. And across the board, people who picked the lightened photo were most likely to vote for him.

Across all three experiments, the way that American students literally see a mixed-race politician depends on whether they agree with his views. If they felt aligned with a candidate, they tended to mentally lighten his skin, and Caruso suggests that this might reflect subconscious associations of white with good, and black with bad. Sadly, the study provides no information about the ethnicity of the students involved - it would be very interesting to see if the same bias in perception applies to viewers who are themselves Black.