During elections, what affects our decision to vote for one politician over another? We'd like to think that it's an objective assessment of many different factors including their various policies, their values, their record and so on. But in reality, voters are just not that rational. 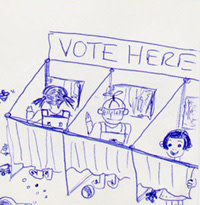 In the past, studies have shown that people can predict which of two politicians will win an election with reasonable accuracy based on a second-long looks at their faces. With a fleeting glance and little purposeful consideration, people make strong judgments about a candidate's competence, that can sway their final choices. And they do this in a remarkably child-like way.

John Antonakis and Olaf Dalgas from the University of Lausanne found that when judging the faces of potential leaders, the decision-making technique of adults is no more sophisticated than that used by children.

They recruited 684 Swiss students and asked them to rate pairs of politicians who had run against each other in the 2002 French parliamentary elections. Based solely on black-and-white photos of the candidates, they had to say who was more competent and by what degree. There were 57 pairs in all, and each volunteer rated just one. All photos were official mug-shots, the researchers only used pairs of the same sex, and they excluded famous individuals such as Segolene Royal.

They found that the students' competence judgments predicted the actual winners of the run-offs with a 72% accuracy. They even gave a good indication of the winner's margin of victory - those who were deemed to "definitely" look more competent than their opponents were more likely to have beaten them by landslides.

It's worth noting that this is a fairly conservative figure. Antonakis and Dalgas only used pairs of candidates where the loser was actually the incumbent and as they put it, "losers should not appear too incompetent given that they had previously won".

In a second experiment, Antonakis and Dalgas showed that children judge faces in similar ways. At a university open day, they asked 681 children aged 5-13 and 160 adults to judge the same sets of faces. They had just sat through a computer game that simulated Odysseus's journey from Troy to Ithaca, and required a certain amount of decision-making skill. Each participant was asked to imagine that they had to repeat the same trip and asked to pick one of the candidates to captain their boat.

The children's choice of captain correctly predicted the winner of each parliamentary election with an accuracy of 72%, a remarkably similar figure to the score achieved by the adults in the first experiment. Indeed, when the judgments of the 160 adults were included in the analysis, the results didn't change. The children were just as good at predicting election results as the grown-ups were; in fact, the child ratings in the second experiment strongly matched the adult ratings in the first one.

These results strongly suggest that adults and children are relying on the same aspects of facial appearance in order to judge a person's competence, whichever those aspects might be. Despite their greater experience and (one would hope) more sophisticated reasoning skills, adults are no better at predicting election results than people many years their junior.

This study fits in nicely with several others, which suggest that election outcomes often rest on snap decisions. Alexander Todorov has repeatedly shown that people's judgments of competence, based on split-second glances at photos, could predict the outcome of Senate elections or gubernatorial contests with an accuracy of around 70%.

The problem with that, of course, is that first impressions are not always accurate. For example, it's actually very difficult to judge someone's intelligence based on their appearance, while some people can give the impression of competence and have anything but. Plato pointed at similar tendencies in The Republic, in a passage that inspired Antonakis and Dalgas's second experiment.

He asked readers to imagine "a ship in which there is a captain who is taller and stronger than any of the crew, but he is a little deaf and has a similar infirmity in sight, and his knowledge of navigation is not much better." According to Plato, the crew is so deceived by appearances that they had failed to select a competent leader. So it was in his hypothetical scenario, so it often is in 21^st century politics.

Now of course, you could argue that first impressions are merely that, and we are clearly capable of changing our opinions based on information we learn at a later date. Surely our views about political candidates must surely fluctuate as we learn more about their policies, affiliations, behaviour, character, and so on?

Well, that might be true, but it seems to be the exception rather than the rule. As Todorov's work shows, voters have an unfortunate habit of anchoring themselves to their initial choices regardless of information that becomes available later in a campaign. And as I've written about before, even undecided voters tend to have already made up their minds, unbeknownst even to themselves.

Ideally, democracies should elect politicians on their actual competence, rather than simply the appearance of it. But as Antonakis and Dalgas say, "These findings suggest that voters are not appropriately weighting performance-based information on political candidates when undertaking one of democracy's most important civic duties."