When we're suddenly confronted with a shocking image, our skin becomes moist and we blink strongly. These actions are automatic and unintentional; they happen without conscious thought. So it may come as a surprise that they can also predict some of our most seemingly considered beliefs - our political attitudes. 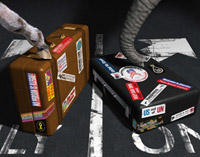 According to a new American study, the stronger these responses, the more likely people are to support the Iraq War, Biblical truth, the Patriot Act and greater defence budgets. Conversely, people who show weaker "startle reflexes" are more likely to support foreign aid, immigration, gay marriage and abortion rights.

Douglas Oxley from the University of Nebraska-Lincoln led the study and he suggests that the factor that unites these attitudes is an interest in protecting one's social structure from threats. These "threats" can come both from abroad or from within; they can be physical dangers like hostile foreign powers, or threats to the status quo, such as policies that violate longstanding traditions.

That responses so involuntary could be linked to views which we hold to be reasoned and considered is certainly surprising, but Oxley is very careful in how he interprets his results. He notes that so far, he has only found a correlation - an association between the a person's political attitudes and the way their body responds to startling sensations. The results say nothing about whether one causes the other- they don't conclude that reactions to threats predispose people to one end of the political spectrum or conversely, that such beliefs cause people to react to threats in certain ways. And they definitely don't suggest that being easily startled makes you conservative, while nonchalance in the face of threats begets liberalism.

Oxley's conclusion is simply that political beliefs have some foundation in our basic biology and are not solely the product of experience, knowledge or upbringing. To a degree, differences in opinion correspond to differences in the way our bodies work, such that people who, for example, support the death penalty are physiologically different from those who, say, advocate gay marriage.

Oxley discovered this link by working with a large team of American social scientists. They called a random sample of local people over the phone and recruited 46 of them who held strong opinions spanning the entire political spectrum. The team asked these select few to fill a questionnaire that laid bare their political views, personality traits and demographic characteristics.

Based on their views on these issues, Oxley divided the volunteers into a "High-support" and a "Low-support" group. That split may well correspond to a conservative group and a liberal one, but Oxley states that he wasn't deliberately aiming for such a divide - after all, he ignored their responses to questions about economic issues. Instead, he wanted a split that would reflect how strongly the recruits react to threats to their social unit. He then gave them something to be threatened by.

Each person was hooked up to physiological measuring equipment and made to watch a stream of 33 images, three of which were particularly shocking - a very large spider on the face of a scared person, a dazed individual with a bloody face and a festering, maggot-infested wound. As the images flickered by, the team measured how easily electricity flowed across the volunteers' skin (its 'conductance'). The current's passage is easier when people experience strong emotional reactions because the outermost layer of their skin becomes moist.

They found that the skin conductance readings for the high-support group shot up when they saw the shocking visuals, while those of the low-support group stayed at an even baseline. When non-threatening images were shown, (a bunny, a happy child and a fruit-bowl) both groups reacted in the same unfazed way.

Not content with assaulting the recruits' vision, Oxley's team challenged their hearing too. They were asked to focus on a point on a computer screen while wearing headphones, which occasionally played loud bursts of white noise at them. We all blink involuntarily when we hear startling noises but people in the high-support group blinked more than twice as hard as those from the low-support group. 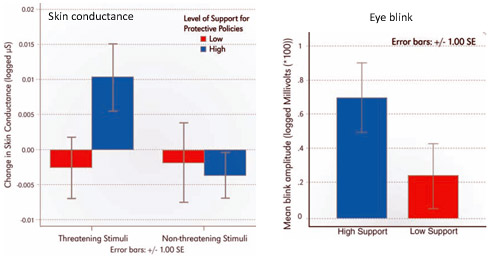 Of course, other factors such as age could affect both a person's physiology and their political view. To account for this, Oxley adjusted all his readings to account for the recruits' age, gender, income and education level (the fact that all but one of them was white meant that adjusting for race was pointless). Even after this fine-tuning, the results held their statistical ground.

As I said earlier, Oxley isn't implying that physiology determines political opinion, or vice versa. Indeed, he thinks that it's most likely that both startle reflexes and viewpoints on socially protective policies stem from a common source. It's possible that this source is an external one - parents, for example, could raise their children with specific beliefs and condition them to respond in specific ways to threats. But Oxley thinks that is unlikely - changes in skin conductance and blinking are both involuntary reflexes that take a sustained programme of conditioning to change.

Instead, he believes that the correlation reflects underlying patterns brain activity, perhaps in an small, almond-shaped part of the brain called the amygdala. This area is involved in emotional learning and, among its other duties, it shapes our responses to threatening imagery. The amygdala's activity is affected by genetic variation and Oxley suggests that this variation could affect both the way we physically respond to threats to our person and mentally respond to threats to our social order.

Indeed, there's growing evidence that political attitudes themselves are to some extent influenced by genes. These innate foundations could help to explain why people with strong political beliefs tend to be unshakeable in their convictions and why political conflict is so omnipresent.