Though dolphins “shout” over their increasingly noisy ocean surroundings, scientists say that their efforts to communicate aren’t always enough. 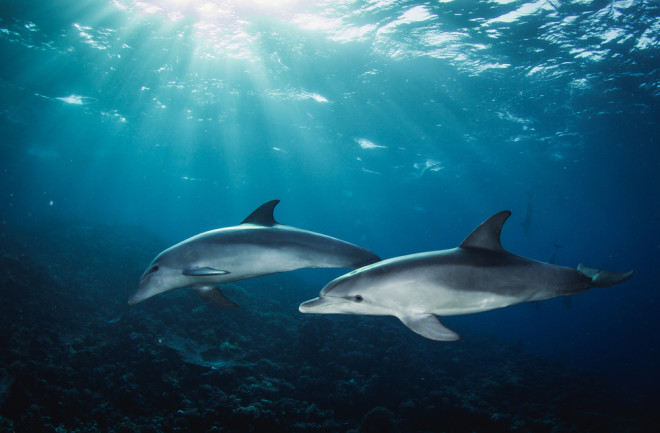 Dolphins use sound to work together and survive in the wild. (Credit: alekss-sp/Shutterstock)

The sounds of crashing waves and calling whales boom beneath the surface of the ocean, though they aren’t the only sounds that travel there. In fact, throughout the past couple hundred years, humans have added a cacophony of new noises to the sea soundscape, harming the many marine species that rely on sound to survive.

Dolphins comprise a major component of these sound-reliant species. And, according to a recent paper published in Current Biology, though these animals try to communicate with one another over their increasingly strident surroundings, their attempts at “shouting” aren't always the most successful.

Armed with an assortment of whistles and clicks, dolphins use sounds to identify and communicate with one another, to mate, seize prey, skirt predators and navigate their underwater surroundings. But, while their aptitude at producing and perceiving sound amounts to one of their biggest strengths as a species, the introduction of new noises into dolphin habitats thanks to human activities such as shipping and drilling diminish their ability to collaborate and survive.

Read more: How Do Dolphins Choose Their Name?

“Those same reasons that make sound so advantageous for animals to use also make them susceptible to disturbance from noise in the environment,” says Pernille Sørensen, a study author and behavioral biology student at the University of Bristol, in a press release. “Within the last couple of decades, we’ve seen a dramatic increase in human-made noise, and noise pollution in the oceans is no exception.”

In this new study, Sørensen and a team of researchers investigated the influence of sound on the ability of two captive dolphins to complete a cooperative task.

Ultimately, they found that the two dolphins changed their calls and altered their body positioning to better communicate and collaborate with one another. But, despite those tactics, the dolphins’ ability to communicate successfully still dropped from around 85 percent to 63 percent due to the presence of unnatural sounds.

“This shows us that despite them using these compensatory mechanisms, their communication was impaired by noise,” Sørensen says in a press release. “Despite their attempts to compensate, […] the noise still impaired their ability to successfully coordinate.”

Why Dolphins Shout at Sea

To test the bounds of dolphin communication, the team temporarily confined two bottlenose dolphins in a small, speaker-filled arena, where the animals were required to use vocal communication to simultaneously press two separate buttons on two separate sides of the arena.

When the team increased the amount of the artificial, "anthropogenic" from the speakers, it found that the dolphins adjusted their communicating calls by increasing their volume and their span. The team also found that the dolphins turned to face one another while communicating, or sometimes swam to the opposite side of the arena, to improve their ability to work together.

“Our work shows that these adjustments are not necessarily enough to overcome the negative effects of noise on communication between individuals,” concludes Stephanie King, another study author and behavioral biology professor at the University of Bristol, in a press release. “This will negatively impact individual health, which ultimately impacts population health.”