How Do Dolphins Choose Their Name?

Dolphins identify themselves with a unique whistle that scientists have likened to a human name. Here's how they decide what to call themselves. 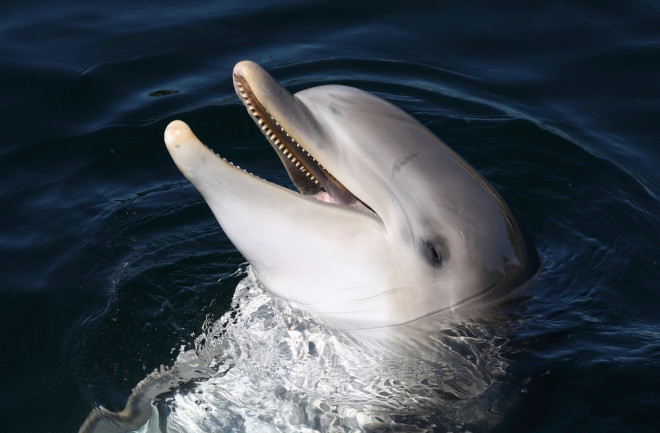 Drifting along ocean currents in their mother’s shadow, newborn bottlenose dolphins sing to themselves. They create a unique siren of squeaks, known as a signature whistle, which scientists have likened to a human name.

Unlike most animals, dolphins cannot use voices as their identifying feature because it becomes distorted at different depths. They instead invent a melody – a pattern of sound frequencies held for specific lengths of time – that they use to identify themselves for the rest of their lives. Bottlenose dolphins (Tursiops truncatus) can even imitate the whistles of their friends, calling out their names if they are lost. Additional information, such as reproductive status, can be conveyed by changing the volume of different parts of the whistle, not unlike how people emphasize certain words to add nuance.

But how do dolphins decide what to call themselves?

By eavesdropping on six dolphin populations in the Mediterranean Sea, researchers at the University of Sassari in Italy revealed that differences in signature whistles were mostly determined by their habitat and population size, according to a study published in May in Scientific Reports. Sound travels differently in distinct environments, so dolphins create signature whistles that best suit their surroundings, according to the study authors.

Dolphins living among seagrass, the researchers in the Scientific Reports study found, gave themselves a short, shrill name compared to the baritone sounds of dolphins living in muddier waters. Meanwhile, small pods displayed greater pitch variation than larger groups, which may help with identification when the probability of repeated encounters is higher.

But not all scientists view habitat and group size as the main drivers of signature whistles. Jason Bruck, a biologist at Stephen F. Austin State University, believes that social factors play a crucial role. He points to a study of dolphins living in Sarasota Bay, Florida where dolphins created unique signature whistles using inspiration from community members. Crucially, the dolphins tended to base their whistles on cetaceans that they spent less time with. “This avoids the problem of every dolphin being named John Smith,” Bruck says.

Laela Sayigh, a research specialist at Woods Hole Oceanographic Institution in Massachusetts agrees. From her work studying cetacean communication for over three decades, Sayigh estimates that 30 percent of signature whistles are based on their mother’s whistle, while others invent a name that is nothing like their mom’s and closer to their siblings’. Others still produce a unique whistle that is distinct from any of their family members. Marine researchers still don't know why some bottlenoses base their whistles on family members and others on lesser acquaintances.

Sayigh believes that factors such as sociability play a role. For example, gregarious mothers expose their calves to a greater variety of signature whistles, giving the calf more sounds to add to their repertoire. Demonstrating this in wild populations, however, proves tricky.

“It’s very difficult to observe what forces are influencing a calf over the period of signature whistle development, which requires extensive observations,” Sayigh says. “You are watching only a tiny fraction of the actual developmental period. If there is some kind of crucial interaction, you might not be capturing those.”

Names aren’t the only way that dolphins recognize each other; they can also detect a familiar face by the taste of their urine.

After observing bottlenoses swimming through urine plumes with open mouths, marine scientists guessed that they could identify other dolphins by the taste of their excretions. Unlike many animals, which predominantly rely on smell, bottlenose dolphins use their nose as a blowhole and don’t have an olfactory bulb.

Another study, published earlier this year in Scientific Advances, confirmed that dolphins can indeed distinguish urine samples from their companions and those of strangers. When the researchers played a signature whistle recording from the same dolphin that provided the urine sample, the dolphins spent longer investigating the speaker than when a mismatched whistle was played.

“We can say with some confidence that dolphins have at least two modes of social identification: Signature whistles and urine cues”, says Bruck, lead author of the study. “Dolphins are excellent whistle mimics if they want to be, so urine might be more resistant to cetacean identity theft.” However, deception in signature whistles has not been properly studied, he adds.

In addition to an individual signature whistle, groups of dolphins may invent a shared whistle to promote social cohesion. Dolphins often broadcast the group whistle when coordinating their behaviour with others, such as foraging for food and guarding mates.

Brittany Jones, a scientist at the National Marine Mammal Foundation who specializes in dolphin communication, has studied a group of eight dolphins that have been trained by the U.S. Navy. Five of the dolphins, who have lived together for 21 years, shared a group whistle which retained enough distinctive characteristics to identify the speaker.

“These shared whistles, although very similar between dolphins, were slightly more similar within an individual compared to between dolphins,” Jones says. This suggests that other dolphins may be able to identify who is making the whistle, suggesting it conveys both group and individual identity.

Like the human equivalent, signature whistles are more than just a name. They can reveal family ties, alliances and possibly a dolphin's overall environmental landscape. Scientists believe there is still more to unlock, including whether dolphins use their impressionist skills to deceive and whether they talk about their friends behind their back. Uncovering the complexity of how these animals use signature whistles may reveal just how imaginative their inner world really is.