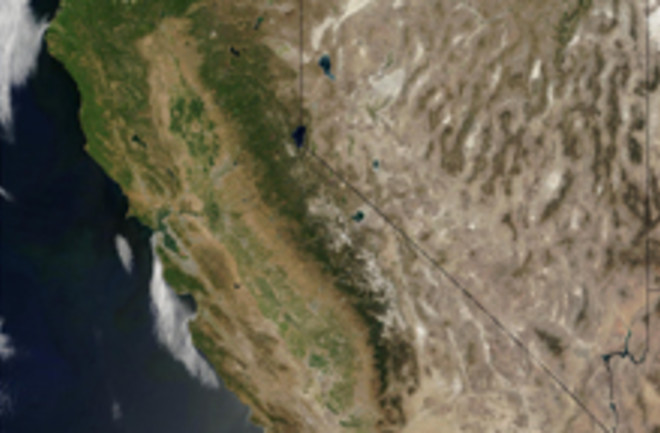 Groundwater levels around the country have been sinking as wells for drinking water and irrigation pull water out of aquifers faster than they can naturally recharge. Now, using gravity-measuring satellites, NASA and California researchers have documented the extent of water loss in California's Central Valley, and the results aren't good.

The measurements show the amount of water lost in the two main Central Valley river basins within the past six years could almost fill the nation's largest reservoir, Lake Mead in Nevada [AP]

. The total is about 30 cubic kilometer; one cubic km contains more than 264 billion gallons of water. The team used the GRACE satellites to measure tiny fluctuations in the planet's gravitational field. Researchers have used these satellites to track changes in ice sheets, but turning these orbiters on California allowed them to see how much the pull on the planet had lessened there, and thus how much water had been lost from the ground.

The satellites can detect changes in the amount of water in a region but not how much is left. Regardless of how much water remains in the aquifer, the researchers note that a declining water table will degrade water quality and will eventually force Californians to drill deeper wells [Science News]

. That's bad news not just for Californians: the Central Valley accounts for an estimated one-twelfth of the nation's agricultural production.

"The numbers we're getting out of this analysis point to groundwater use at unsustainable rates," said Professor Jay Famiglietti of the University of California, Irvine. "It's leading to declining water tables, decreased crop sizes, and continued land subsidence - something that has been going on in the Central Valley for decades" [BBC News]