A Graceful Look at Earth's Gravity

A pair of satellites measure how gravity sculpts the Earth. 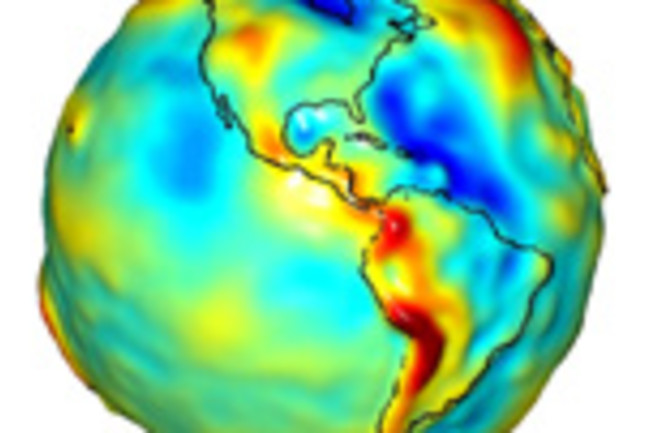 Gravity highs (in red) and lows (in blue) give Earth its lumps and bumps.

Image prepared by the University of Texas Center for Space Research, in collaboration with NASA/JPL and the GeoForschungsZentrum Potsdam

The GRACE project—a pair of satellites constructed and launched in a collaboration between NASA and the German Aerospace Center—has measured Earth’s gravitational field so precisely it can trace variations in density (and hence local mass) across the continents and throughout the deepest ocean. These gravity plots may be the key to studying deep-sea currents, which have a huge impact on climate, says principal U.S. investigator Byron Tapley of the University of Texas at Austin.

The GRACE satellites (for Gravity Recovery and Climate Experiment) orbit an average of 137 miles apart and send microwave beams between them to measure changes in each others' distance and speed, revealing any small gravitational variations.

“As the first satellite flies over a gravity bulge, it feels the gravity and speeds up, and then slows down as it goes by, just as the second satellite speeds up,” Tapley says. He and his colleagues combine readings from around the world to build a model of the geoid, the shape of the ocean’s surface if the ocean were not affected by disturbances such as atmosphere pressure, wind, or the Earth’s rotation. Subtracting out all the gravity effects from measurements of the height of the ocean's surface then provides accurate readings of ocean activity and circulation. The first map is just an early snapshot of the project’s capabilities. GRACE will produce new maps every month for the next five years, allowing researchers to study seasonal effects and to look for hidden signs of global climate change. “A lot of mass moves around the Earth, predominately in the water cycle of rain and snow, but we’ve never before been able to measure that on a global scale,” Tapley says.