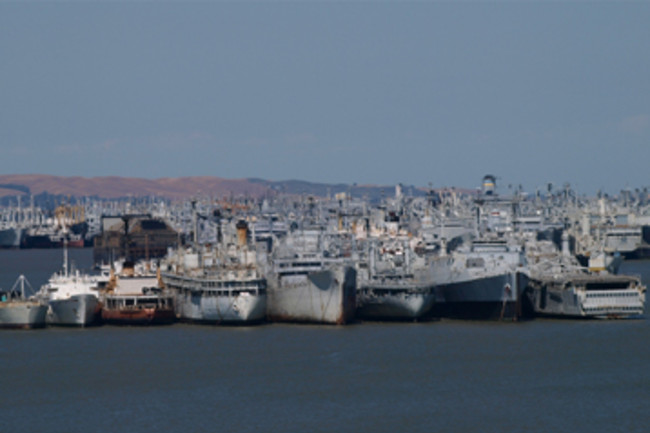 The ghost fleet, mothball fleet, reserve fleet—whatever you want to call the long-obsolete U.S. Navy ships that have been rusting in California's Suisun Bay for decades, they might finally be gone this decade. The federal government's Maritime Administration says it will spend $38 million to remove about half of the crumbling convoy from the waters near San Francisco by 2012, and dispose of the rest by 2017.

After World War II, there were thousands of surplus ships, and, in 1946, the Maritime Administration began keeping the best of them in reserve. At one time, more than 350 ships were in the fleet, including cruisers, destroyers, supply ships, transports and tankers [San Fransisco Chronicle]

. The Navy dusted off some of them for use in the Korean and Vietnam wars. But the rest became relics, slowing decaying over the next six decades. And while the ghost fleet provides some nostalgia for Navy vets, it provides something less romantic for Suisun Bay: pollution. Twenty tons of lead-based paint had leached into the water. 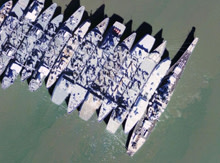 Because of those concerns, environmental groups including the National Resources Defense Council sued the Maritime Administration, leading to this disposal plan.

The 25 most decrepit ships will be removed by 2012, and stripped of loose paint, barnacles and plants before they are towed to Texas to be cut apart and recycled [The New York Times]

. A federal judge still must approve this settlement, but if one does, then the Maritime Administration will remove the other 27 old vessels by 2017. Not all the ships are headed for disposal, though. One resident of the bay is the battleship Iowa, which

carried President Franklin D. Roosevelt to the Cairo and Tehran conferences in 1943. The ship was recommissioned in 1984 but was laid up again in 1990 after an explosion in a turret that killed 47 sailors. The Iowa will be retained at Suisun Bay pending disposition as a museum ship [San Fransisco Chronicle]