The Navy's Old Ships Get a Second Life... As Fish Residences 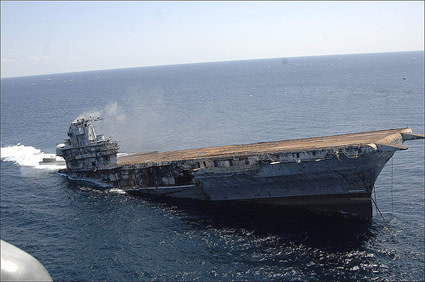 Have you ever seen those aquarium ornaments that look like shipwrecks? Well, the U.S. Navy is applying that idea in real life. In 2006, the Navy intentionally sank one of its old boats off the coast of Pensacola, Fla. The U.S.S. Oriskany, which had served in the Korean and Vietnam wars and launched the last bombing mission of Sen. John McCain, became an "artificial reef." The Navy has 59 decommissioned ships sitting around and nothing to do with them—while most will become scraps, some might become reefs. But is sinking more old ships really a good idea? It seems like a strange move, one step removed from attempts to tinker with ecosystem problems by introducing new predators or invasive species. But the coastal waters of the Earth already abound in old ships: Besides the famous goners like the Lusitania or the Gordon Lightfoot-immortalized Edmund Fitzgerald, it's impossible to know just how many long-forgotten ships are decaying under the sea. In any case, divers have already identified 38 species of fish hanging around the Oriskany. The Navy spent $20 million cleaning up the Oriskany before they sank it, but the city of Pensacola has recouped $4 million from tourism—recreational divers or war buffs who want to go down and see the ship. Perhaps other cities will start asking the Navy to sink a ship in their harbor so they have a new tourist attraction. However, once you've seen one retired Cold War relic inhabited by marine life, you've probably seen them all. More importantly, from a should-we-or-shouldn't-we-perspective, the Navy's cleaning operation wasn't totally complete. According to The New York Times, 700 pounds of polychlorinated biphenyls (PCBs) remained aboard the Oriskany when it went down, thanks to an agreement the Navy struck with the EPA. The State of Florida is currently studying whether these toxic compounds are getting into the food chain, but considering Congress banned PCBs 30 years ago, we're not exactly excited about the idea of having them sitting in the ocean.