Female Monkeys Live Longer If They Have a Social Life

If female capuchin monkeys have more female friends, they tend to live longer. And this finding was not common among heterosexual relationships. 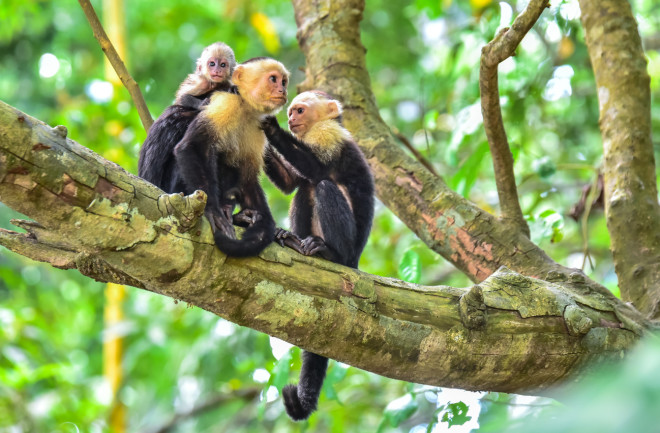 When it comes to getting along in life, it’s no surprise that interacting with friends can be a great boon to feeling good. Now, researchers have discovered that female white-faced capuchin monkeys tend to live longer when they have more “friends.”

The research team, led by Kotrina Kajokaite of the Max Planck Institute for Evolutionary Anthropology, gained insights into these monkeys’ social interactions by analyzing 18 years of data from the Lomas Barbudal Monkey Project in Costa Rica. “We know their life histories, who is related to who,” explains Kajokaite, who studied the capuchins while at UCLA.

Primatologist professor Susan Perry founded the Lomas Barbudal Monkey Project in 1990, and biologists have followed the lives of six generations of monkeys ever since. “You know so much about these animals that it’s almost like a soap opera watching them,” Kajokaite says.

By tracking interactions between the monkeys — such as grooming and foraging for food — she and her colleagues found that the adult females that were better integrated with other females tended to live longer. They published this finding in the journal Behavioral Ecology earlier this year.

An important point to clear up is whether these capuchins actually have what humans refer to as friends: Well, admits Kajokaite, probably not as we might know it. “If you watch the animals, you never get into their heads completely, right?” she says. “You don't know what they think about other individuals, and you can't really measure that, but what you can measure is who they interact with the most.”

When it came to relationships with adult males, however, the team “found virtually no evidence that heterosexual relationships are beneficial for female survival.” These interactions, in which females groomed males more frequently, only slightly benefited survival.

One behavior that showed more limited influence on female capuchin survival was the formation of “coalitions” with other females. “They stack on top of each other and they threaten their opponent, or they embrace each other or put their cheeks together,” Kajokaite says. By joining forces in coalitions, these little monkey troops work together to ward off others in their group when tensions rise, perhaps over access to food.

Though they may look cute and cuddly, white-faced capuchins can be incredibly territorial and one of their leading causes of mortality is infighting — particularly among males.

Survival of the Friendliest

Exactly how friendly interactions between females result in increased survival isn’t clear as of yet. The bonds could influence social rank, reduce risks of fights with other monkeys or lead to better food access, suggests Kajokaite. All of these things could give individual monkeys a greater chance of survival.

The act of grooming could also be key. By providing this favor to others in their group, females might enjoy greater benefits by reaping more support when they are threatened — or it may simply encourage other monkeys to tolerate them more. “If you have more access to food, you're maybe healthier,” Kajokaite says. “[But] if you groom and increase your centrality in the group, you could be reducing the risk of predation.”

Capuchins aren’t the only species to do this; female relationships are also important to the longevity of baboons and macaques. Yet much more remains to be discovered about the behavior and how social interactions impact their survival. Another possibility, according to this most recent study, is that some white-faced capuchins are genetically predisposed to be friendlier or to groom others more. But this remains to be determined.

To find answers to these questions, the white-faced capuchin soap opera must continue.