Meet Khadija Diouf. She is 24 years old, she’s single, she lives in France and she has spent the last three years working in secretarial and accounting jobs. Her surname tells us that she’s descended from Senegalese immigrants, and her first name strongly suggests that she’s Muslim. Hundreds of employers across France will have seen Khadija’s name and none of them would have known the most important thing about her: she doesn’t exist. Khadija is one of three fake women invented by Claire Adida from the University of California, San Diego. They are all part of a clever experiment that reveals how the French job market is rife with discrimination against Muslims. Adida found that in at least two sectors, a Muslim candidate is around 2.5 times less likely to get a job interview than a Christian one, with all else being equal. These results were backed up by a large survey, which showed that among second-generation Senegalese immigrants, Muslim households earn far less than Christian equivalents. To some, this won’t come as a surprise, for modern Europe doesn’t exactly seem like a welcome place to be a Muslim. In France, the Senate voted almost unanimously to ban women from wearing Islamic face-veils in public, a move that drew widespread support from other countries. Swiss voters approved a constitutional amendment to ban the construction of new minarets on mosques. In the UK, ridiculous headlines in so-called newspapers regularly portray Muslims as an identically-minded group, out to distort ‘traditional’ values, kill people and generally cause trouble. Negative opinions are growing everywhere. These examples of religious discrimination are obvious and blatant, but others – such as prejudice in the workplace – are harder to uncover. Adida did it by focusing on France’s Senegalese community, which includes a mix of both Muslims and Christians. To see how they would compare on the job market, Adida created three imaginary CVs. All were single, 24-year-old women, with two years of higher education and three years of experience in secretarial or accounting jobs. Only their names, and small details about past employers, differed. Khadija Diouf had a well-known Muslim first name and an obvious Senegalese surname and had worked with Secours Islamique, a humanitarian organisation. Marie Diouf had worked for its counterpart Secours Catholique and had an obvious Christian first name. And Aurélie Ménard had a typical French name with no religious connotations and had only worked for secular firms. In the spring of 2009, Adida collected ads for secretarial and accounting jobs from the French national employment agency and grouped them into pairs, matched for area, sector, company size and position. For each pair, both received Aurélie’s CV while one received Khadija’s and one received Marie’s. The results were striking. Marie Diouf got a positive response on 21% of her applications; she was clearly an employable (if fictional) young woman. But Khadija Diouf – her exact equal in virtually every respect – got callbacks from just 8% of her applications. For every 100 interviews that Marie was called for, Khadija was summoned for just 38. Even after Adida included a photo on the applications (the same one, showing a woman who was clearly not North African), she found the same bias. 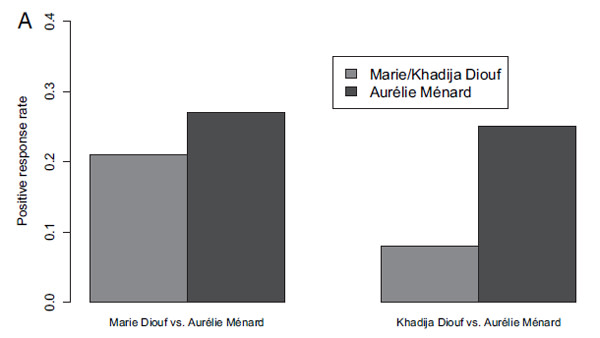 It was impossible to send both Marie and Khadija’s CVs (which were virtually identical) to the same recruiter, given that they were identical except for a few names. Alarm bells would have rung. Nonetheless, it’s clear that Adida matched pairs of recruiters as well as possible, given that Aurélie’s odds of getting interviews were the same no matter which employer read her CV. Adida essentially did the closest possible thing to a randomised trial (the gold standard in medicine), by assigning identical ‘people’ to be either Christian or Muslim and seeing how they fare. In her own words, “This experiment thus provides a clear indication that in at least one sector of the French labor market... there is significant religious discrimination.” The strength of Adida’s experiment lies in isolating the effects of religion from the package of cultural traits that accompany it. That’s far from easy. In European countries, Muslim immigrants tend to come from the same place. In the UK, they largely hail from South Asia. In France, they mostly come from northern Africa. If Muslims in these countries suffer socially and economically, religious discrimination is just one possible explanation. Others include racial or geographical discrimination (north Africa, for example, has a history of conflict against French imperialism), or differences in education, language or culture in one’s home country. An experiment that tries to look at religious discrimination needs to somehow hold all of those other factors equal. That’s exactly what Adida managed to do. She also found that the discrimination that her fake applicants faced can directly affect the lives of real Muslims. She relied on a survey done in 2009 by David Laitin, looking at issues of integration among 511 second-generation Senegalese Muslims. Notably, the survey only looked at two ethnic groups – the Joolas and Serers – who have Christian and Muslim members in equal measure. Both groups arrived in France in the 1970s, so neither enjoyed an economic headstart, although the Christians were slightly better educated. The survey’s data revealed that the Muslim households were significantly poorer than their Christian counterparts, even after adjusting for their initial educational advantage. They’re more likely to fall into poorer income groups and they make around 400 Euros less per month, around 15% of the average monthly salary in France. 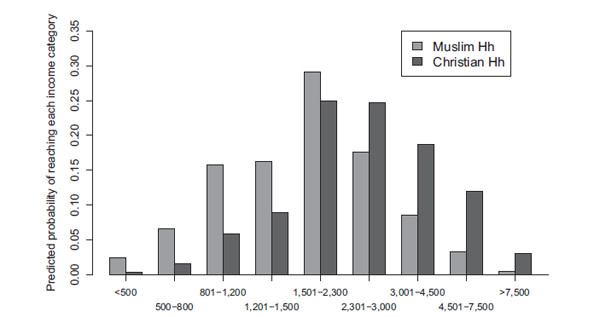 If anything, this just scratches the surface of anti-Muslim discrimination in France. There is a common view in France that Senegalese Muslims aren’t “real” Muslims because they have know little Arabic and because they socialise with Africans of all religions. The level of discrimination faced by groups that are more clearly linked with Islam might be even greater. The big question now is why, and it’s something that Adida plans to explore in future studies, using interviews, psychological games and more. For the moment, her current study stands as a rare treat among research into discrimination. Some research goes on in the lab and benefits from careful experiments, but it’s unclear if their results apply in the real world, with all its complexities and vagaries. On the other hand, real-world experiments often struggle to isolate a single factor like religion, from the many others than entangle it. Adida’s work – inspired by a classic experiment on racial discrimination in America – combines both approaches: a careful, real-world experiment that does its best to unveil the effect of religion, with all else being equal. Reference: PNAS http://dx.doi.org/10.1073/pnas.1015550107More on discrimination: