We tend to think of race as a fixed part of our identity, a trait that is set at the moment of conception and stays unchanged for our entire lives. But a new study shows just how fluid our conceptions of race can be. 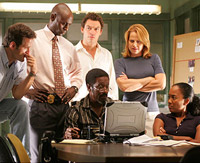 By following a group of people over almost two decades, Andrew Penner and Aliya Saperstein from the University of California, Irvine found that the way people identify themselves racially, and the way others define them, change over time and are coloured by social status. Their study strongly argues that race is as much a flexible indicator of our social standing as it is a reflection of our biology.

Penner and Saperstein used data from a study called the National Longitudinal Survey of Youth, which began in 1979 by interviewing a group of about 12,000 Americans aged 14 to 22. The sample were followed once a year until 1993 and every two years thereafter. Every time, the interviewers classified each person as "White", "Black" or "Other" and in both 1979 and 2002, the people themselves were asked to describe their "origin or descent" or which "race or races they considered themselves to be".

The results were surprising, especially for a country like the US, which apparently has very rigid racial boundaries. Over the 19 years of the survey, the race of about one in five people had changed at least once in the eyes of their interviewers.

It's possible that some of these cases were just due to mistakes on the part of the people filling out the forms, and indeed, some records showed a single anomalous year that didn't match the rest. But Penner and Saperstein found that the error rate for another trait - gender - was only 0.27%, suggesting that errors in recording only played a very small part in explaining this trend. And for some people, their race, as noted on the survey forms, either shifted dramatically at one particular point or fluctuated between the different options.

The duo found that these changes were related to social status. People who were classified as white in one year were significantly less likely to be seen in the same way if they had lost their jobs, been sent to prison, or seen their household incomes dip below the poverty line. For example, among people described as white in one year, 96% of those who remained outside prison were placed in the same category a year later, but only 90% of those who had been incarcerated were still described as white.

The reverse was also true. People who were described as black in one year were more likely to stay in the same category if they were imprisoned, unemployed or poor.

And it wasn't just the interviewers whose opinions changed. The subjects themselves had a tendency to switch their own racial identity depending on their status, and to the same degree as the interviewers did. For example, among people who described themselves as white in 1979, 97% of those that remained well-off felt the same way in 2002. But among those who had tasted poverty, just 93% still described themselves as white.

The graphs above follow the same pattern as the previous ones; these refer to the interviewees' own racial identity.

All of these changes were statistically significant, and are even more pertinent in the aftermath of the recent US elections, when many galling debates centred on whether Barack Obama was truly black, given his mixed parentage and his social success.

To Penner and Saperstein, the study contradicts the idea that races, and the differences between them, are dominated by biological differences between groups of people. They see race not as a fixed entity that is purely determined from birth, but a flexible one, settled by a tug-of-war between different possible classifications.

Biological traits like skin colour obviously have a strong pull, but they aren't alone - changes in social position can also affect how people see themselves and are seen by others. The researchers draw a comparison with our health. Inherited genes can have a strong influence on a person's risk of eventually dying from cancer or heart disease, but changes in diet or body weight can sway those odds throughout one's life.

Perhaps the strongest aspect of the study is its clear demonstration of the self-fulfilling nature of racial stereotypes. Just as black Americans make up a disproportionate percentage of the country's poor, unemployed and imprisoned, those same people are more likely to be seen as black and to identify themselves as such. We are used to thinking that race can shape social status. How much more interesting to see that social status can also shape race.

Update: Read further opinions on this issue from Razib and Daniel Macarthur

Reference: PNAS; citation to be confirmed; paper to be published this week