A common problem afflicting modern psychology is that it's mainly based on experiments with middle-class white people, often from North America or Europe. Open up the field of inquiry to other cultures, social circles or ethnic groups and different trends come to the fore.

Take the effects of a baby-face. Decades of studies have found that rounded, smooth, young-looking faces engender trust and sympathy. People adorned with such youthful looks tend to be treated with more sensitivity and patience, receive more lenient sentences, and make better spokespeople during PR crises. But these disarming faces come at a price - they're also associated with weakness and incompetence, which can harm those striving for positions of authority. Indeed, previous studies have shown that baby faces are rare among the highest echelons of business.

But these studies have only ever been done in white men. Robert Livingston and Nicholas Pearce found that the opposite is true for black men. Baby faces are more common among black chief executive officers (CEOs) than their white peers. Not only that, but there was some suggestion that men with such faces tend to command larger salaries and lead more powerful corporations than those with sterner countenances.

Black people in the US face more obstacles in their path to top than their white counterparts do. In addition to proving their diligence, skill and competence, they must fight against prejudices and stereotypes of black people as less intelligent or even threatening. Livingston and Pearce suggest that far from being a hindrance, a disarming face actually helps black men by cancelling out the stereotypes that might otherwise weight down their social climb.

Livingston and Pearce asked 21 white or Asian students to rate the faces of 40 men on their "babyfaceness" and various traits relating to warmth and leadership competence. The men were all current or former CEOs of Fortune 500 companies, including Sears, Time Warner and Merrill Lynch. Each black individual was matched to a white predecessor or successor from the same company.

On average, the students rated the black CEOs as more babyfaced than their white colleagues, and while the difference was small, it was also statistically significant. The black CEOs were also rated as being warmer than either the white CEOs or a random group of ordinary black people, while white and female CEOs were judged to be no more or less competent than average members of their social groups. 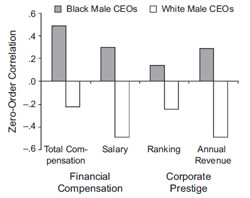 Livingston and Pearce also found that baby-faced black CEOs tended to head up more prestigious companies than their white peers, and receive larger financial benefits. The opposite was true for white CEOs, for whom baby faces were a disadvantage (although it's worth noting that the small sample size meant that none of these associations were statistically significant).

While this study certainly suggests that baby-faces provide black men with some sort of advantage in the business world, Livingston and Pearce admit that it has many weaknesses. For a start, people might have their own definitions of what makes a face baby-like, and baby faces might also be linked to age or attractiveness.

To address these problems, Livingston and Pearce repeated the experiment with 106 new students. This time, they trained the volunteers on the features of a baby-faced appearance and used several photos to illustrate that these features aren't specific to any race, gender or age. When it came to assessing the CEOs' faces, the volunteers also rated them in terms of attractiveness, age and skin colour.

Even after this training, the volunteers' judgments were the same as those of the first group and it didn't matter how attractive the students found the CEOs, or how young they thought they actually were. They also deemed the black CEOs to be more baby-faced than the white ones, and the ratings for warmth and competence were nearly identical to the first group. When asked to guess the salaries of the people in the photos, the students assigned the highest salaries to the white CEOs, but they thought that the baby-faced black men would be better paid than those with more mature faces.

This is in no way intended to downplay the achievements of black men who rise to leadership roles. It would be a gross misreading of the study to say that their success is down to their face shapes. If anything, the study shows the challenges that black men face amid a morass of stereotypes.

For a start, the first study showed that black CEOs were deemed to be warmer than their white peers, but also less competent. This could possibly force them to redouble their efforts to gain respect. Livingston and Pearce also suggest that the boon of a warm appearance could mean that black leaders may have less freedom than their white colleagues to display anger, defiance or assertiveness. Given such social constraints, those who do manage to rise to the top deserve even more credit.

For the moment, the study's lessons are restricted to the world of high business. If Livingston and Pearce's theory is correct, it's unlikely that having a warm baby-face would be of benefit to black men in lower- or middle-management, to black leaders in fields where black people dominate, or to black people in the company of non-prejudiced white peers.

The study also only focuses on having a youthful visage. There are other ways of being warm and disarming, that could provide similar psychological counterbalances against stereotypes. President Obama, after all, looks young but he's hardly chubby of cheek. For their future research, Livingston and Pearce plan on studying other potentially disarming traits including dressing smartly, speaking eloquently, having a goofy appearance, or even having a mixed racial background.

More on race and psychology: