In American high schools, black students typically perform worse than their white peers, which can damage their self-esteem and their future prospects. Studies have found that the fear of living up to this underachieving stereotype can cause so much stress that a child's performance suffers. Their teachers may even write them off as lost causes, and spend less time on them. 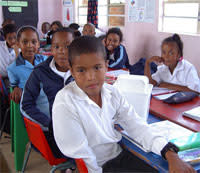 With so many students caught in this vicious cycle, where the stereotype of poor performance strengthens itself, it might seem absurd to suggest that you could turn things round in less than an hour. But try telling that to Geoffrey Cohen from the University of Colorado.

In 2007, he showed that a simple 15-minute writing exercise at the start of a school year could boost the grades of black students by the end of the semester. The assignment was designed to boost the student's sense of self-worth, and in doing so, it helped to narrow the typical performance gap that would normally separate them from white students. Now, Cohen returns with a new report of the same experiment two years on.

Things are still looking good. Even though two years have passed, the students are still feeling the benefits of those precious exercises. With the help of a couple of booster sessions, they still felt more confidentabout their chances of success, their grade point averages had increased (particularly among the weakest students), and the proportion who had to repeat a grade was two-thirds lower.

Cohen originally asked a group of white and black seventh-graders to write about a topic that they felt was important - from having good friends, to sense of humour, to musical ability - and why it mattered to them. The idea was to encourage the students to affirm their own abilities and their integrity, as a sort of psychological vaccine against the negative effects of stereotypes. As a control, a second group of students had to write about something they felt was not important, and why it mattered to someone else. Teachers, incidentally, were never told which student was completing which assignment and they were largely kept in the dark about the exercises and the aims of the experiments.

The writing exercise worked. The black students who wrote about themselves achieved better grades than those who wrote about other people, while the white students were unaffected. The gap between the two ethnic groups was slashed by 40%. But benefits like this often decay over time, so Cohen wanted to see if his solution was a long-term one.

He revisited the students again and managed to reconvene with 93% of them (the rest had either moved or were ill). Over the next year, they did 2-3 booster versions of the original exercise. They wrote about a different value or delved more deeply into one they had named earlier. The control group simply described a part of their daily routine. In year two, only half of the students who wrote about themselves were given more booster exercises, while the others carried on as usual.

The results were very positive. After two years, the black students earned higher GPAs if they wrote self-affirming pieces on themselves rather than irrelevant essays about other people or their daily routines. On average, the exercises raised their GPA by a quarter of a point.

As before, only the black children benefited and the low-achievers most of all. Those in the bottom quarter of their classes raised their GPAs by 0.4 points. And while 18% of the control group were placed in remedial classes or held back a year, only 5% of those who did Cohen's exercises were penalised in this way.

These figures support Cohen's contention that the exercises break a cycle where doing badly confirms negative stereotypes, increases stress and leads to ever worsening performance. During the years of middle-school, all students tend to show a drop in performance, regardless of ethnic background. But Cohen found that black children who boosted their sense of integrity showed much shallower declines in GPA than their peers. Even the students who stopped attending booster sessions in the second year had the same advantage, which suggests that even a couple of sessions have long-term benefits.

The confidence-boosting effects of the exercises were made abundantly clear by a short survey, which showed that black students who wrote about others finished the school year with less confidence in themselves than those who reasserted their self-esteem. They felt more positively about their own abilities to fit in at school and to succeed academically, even if they had originally performed badly before Cohen came along.

However, for the control group, a bad early start dealt a lasting blow, and it led to feelings of inadequacy later on. This is exactly the type of psychological cycle that Cohen wants to break. He believes that by shoring up a student's integrity in their early school career, even briefly and subtly, can provide them with psychological defences against any failures.

There's good reason to be optimistic about Cohen's work. It's a very simple task that would be easy and cheap to roll out. It can narrow the gap in performance between black and white students, it has long-term benefits and works best for struggling students who need the most help. Best of all, it provides more evidence that the poor performance of black students is hardly a sign of lacking ability, but a social problem that can be addressed. One can only hope that solutions like these will be even more effective in a time when a black President provides a strong counterpoint to negative racial stereotypes.

More on race and equality: