Even without practice, sleep improves memory of movements

When we think of memory aids, we consider repeating what we've learned, using clever mnemonics, or breaking information down into bite-size chunks. But one of the best memory aids we have available to us is something we all do on a daily basis - sleep. Studies have found that sleep enhances our memories of facts and physical skills alike. It can even help us remember movements that we see others do.

But this only works within a short window. Ysbrand van der Werf from the Netherlands Institute of Neuroscience found that people who saw a video of someone tapping keys on a laptop remembered the sequence more accurately if they slept on it within 12 hours. Any longer than that, and the snoozing didn't boost their recall.

Van der Werf showed the video to 128 volunteers and then tested them on either the same finger-tapping sequence or a different one. The gap between video and test was either 12 or 24 hours, and some of the volunteers were allowed to sleep during the interval while others were not.

If the test sequence didn't match the ones they saw, all the recruits did equally well. But if the sequence was the same, those who managed to sleep within the first 12 hours stood out - they were 22% faster and made 42% fewer errors than their peers who either didn't sleep or who slept later. They even improved whether they had their naps during the day or in the evening.

These results parallel those from experiments where people actually had a chance to practice new skills before their naps. The big difference here is that the improvements came only after watching movements rather than actually performing them. 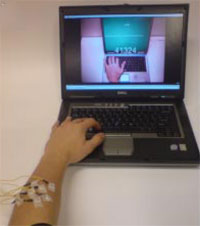 Van der Werf confirmed that by taking great care to ensure that his volunteers weren't actually trying out the keystrokes for themselves. While watching the video, they had to tap two different keys to keep their fingers busy. Van der Werf even measured the muscle activity in the arms of seven volunteers to rule out the possibility that they were making subtle, unnoticed finger movements.

If it's not to do with practice, it's not to do with memorising the digits themselves or the position of the keys either. If the volunteers just saw the numbers flash up on screen, or if they saw coloured squares light up in the same position as the relevant keys, they didn't become more accurate or faster when they had to replicate the sequence. They needed to actually see someone else doing it.

Van der Werf thinks that the recruits probably imagined their finger movements while watching the video, even if they didn't actually try them out. It may even involve the mirror neurons that fire when an individual performs an action and when it sees someone else doing the same action (although mirror neurons have only been properly found in monkeys, and not humans).

Either way, the results highlight the importance of a good sleep when people are trying to pick up new physical skills. This could be especially important for people who can't possibly to practice the movements in question, such as those who have suffered a stroke or broken a limb. And clearly the most important implication is that the next time I see someone doing parkour, I will immediately lie down and have a little nap. When I wake up, I will be Batman. SCIENCE!