Which of these strings of letters is easier to remember: QKJITJGPI or BBCITVCNN?

Chances are, you chose the latter string, where the nine letters are the combined names of three television networks. This neatly illustrates a fundamental property of human memory - that we remember long strings of information more easily if we can break them down into bite-sized chunks. In this case, a nine-letter string can be divided into three lots of three letters. You probably use similar strategies for remembering telephone numbers, credit card details, or post codes. 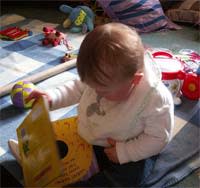 Now, Lisa Feigenson and Justin Halberda from Johns Hopkins University have found that infants just 14 months old can use the same technique, delightfully known as "chunking" to increase the limited scope of their memories. Their work suggests that this technique isn't something we learn through education or experience - it's more likely to be a basic part of the way our minds process information.

You can consciously use chunking to improve your recollection, but we all do it unconsciously to a large degree. In fact, the technique is the reason why we are rarely aware of the pitiful capacity of our working memory - the amount of information we can hold and work with for short periods of time.

For the longest time, psychologists believed that this mental workspace maxed out at seven items ; adults who saw a flashing array of letters or digits could only remember about seven at a time. But even this score is an overestimate. Later experiments which specifically set out to block chunking showed that adults can only store four items at most, while children and the elderly can only cope with three.

To demonstrate that infants can surpass these limits, Feigenson and Halbarda showed 44 babies a selection of four toys. These were hidden in a box, and the children were allowed to search for them. In some trials, all of the toys were still waiting in the box to be discovered but in others, the sneaky experimenters has secretly hidden two of them elsewhere. If the infants could successfully hold four objects in mind, they should continue to search if they expected to find four toys and had only uncovered two. Likewise, if they expected four toys and found four in the box, they should stop searching quickly.

Feigenson has used this method before and found that infants search for the correct amount of time when one, two or three items were at stake, but failed in trials involving four. In these experiments, it was the number of objects that mattered and not their desirability (the infants could no better remember four exciting toys than they could four boring white balls).

But this time, the four toys consisted of two pairs of identical objects and with this small tweak, the infants 'passed' the test. They spent significantly longer in their searches if one of each object was withheld, than if the box contained all four. That suggests that infants are capable of organising their memory for objects in a hierarchy. 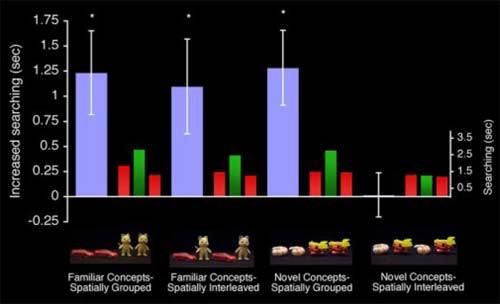 For familiar objects like cats and cars, the position of the objects didn't matter - the pairs could be separated or interspersed and the infants still remembered to search for all four. But for items they had never seen before, like tanks and shrimp, they only searched for the appropriate length of time if the matching objects were placed next to each other (e.g. tank-tank-shrimp-shrimp versus tank-shrimp-tank-shrimp). So the infants can only chunk novel objects if they are grouped together in a systematic way that makes the similarities between them clearer.

Variations on a theme

In this first experiment, the pairs of objects were identical but a second test revealed that infants could still chunk effectively if they were given pairs that were conceptually similar but visually distinct - say, two different types of cars, or differently coloured cats. A third and much more difficult test confirmed the idea that infants were using conceptual abstract cues to group the objects together, and not just visual ones at that.

This time, the infants saw not cars or cats, but four identical orange balls. The experimenters pointed at the balls in turn and excitedly gave them a label, often a made-up word like "Dax!" or "Blicket!". These arbitrary verbal labels were the only pieces of information that the infants could use to categorise the balls, but categorise them they did. As with cats and cars, the infants spent longer searching for daxes and blickets if there were fewer than expected. As a control, Feigenson and Halberda showed that generic labels such as "Look at this!" or "Look at that!" had no effect.

The infants didn't stop at four balls either - the art of chunking enabled them to remember a total of six. Using the same box-searching method, Feigenson and Halberda showed that infants could remember to search for six balls if these were presented as three groups of two, by placing the middle pair on a raised platform. But if all the balls were placed on the platform, the infants failed the searching test. Six balls is a lot - in previous experiments where chunking wasn't an option, Feigenson found that infants could only remember three items at most. These new experiments double their previous top score. 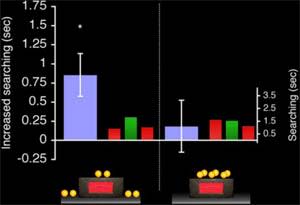 The infants' exposed talents at recollection tell us that memory isn't a biological hard drive that records a carbon copy of our experiences. Right from the first year of life, our brains efficiently reorganise information from the world around in a hierarchical way. Four items become two groups of two; six becomes three groups of two, and so on. This restructuring lets us store large amounts of information using a system that has an otherwise limited capacity, and it happens without any training and at an age before we learn to speak.