Previous research purported that the basic building block of life appeared in our atmosphere roughly 2.5 billion years ago. A new study rejects that timeline. 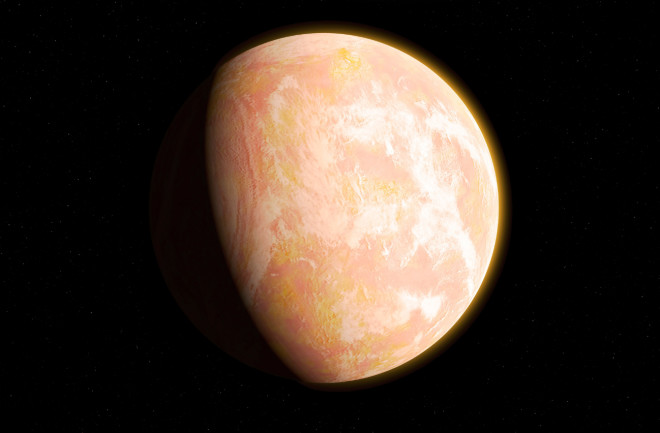 Some 3.8 to 2.5 billion years ago, Earth's atmospheric haze may have made the planet appear orange. (Credit: NASA’s Goddard Space Flight Center/Francis Reddy)

Oxygen provides a necessary ingredient for nearly all forms of life on our planet, but it didn’t always exist here. For most of Earth’s history, oxygen was absent — only appearing in the last two billion years or so.

The “Great Oxygenation Event” that infused the gas into our atmosphere is commonly thought to have occurred around 2.4 billion years ago, when a rise in cyanobacteria released a huge amount of oxygen through photosynthesis. But it’s been difficult to get any more precise in terms of dating the first appearance of this life-giving gas; after all, how are scientists supposed to detect such a small quantity of oxygen from so long ago?

Some researchers argue that smaller amounts of oxygen may have arisen prior to this major influx, possibly due to an even earlier development of cyanobacteria. Others cast doubt on such studies, claiming that newer evidence rules out the possibility.

Off by a Few Million Years

The evidence for this massive oxygen increase lies in banded iron formations and sulfur isotopes, among other evidence. The isotopic signature of sulfur from more than 2.4 billion years ago, for example, shows damage from ultraviolet radiation. After that point, there are fewer of these changes in the rock, perhaps because atmospheric oxygen partially blocked incoming UV rays.

In 2007, a team of researchers turned to trace amounts of oxidation in sulfur and molybdenum —chemical elements found in rocks from the Mount McRae shale deposits in Australia — that date to roughly 2.5 billion years ago. When they used a chemical stratigraphy technique to analyze the powdered rock specimens, it revealed a “whiff of oxygen” more than 50 million years before the supposed Great Oxygenation Event.

In a newer study published in Science Advances this year, however, Sarah Slotznick, an assistant professor of Earth sciences at Dartmouth College, and her colleagues used different high-resolution techniques to reexamine these rock specimens. Anticipating it would be difficult to untangle the traces of oxygen left behind billions of years ago from the traces left in the rocks later on, they analyzed ultra-thin samples using technology like synchrotron-based X-ray fluorescence spectroscopy, capable of mapping out minuscule traces of the element.

Their work produced finer detail about the timing of the various geological processes in the rock: Although the shale formed from organic carbon and volcanic dust, the traces of oxidation that appeared in earlier layers in the rock (including the molybdenum) were actually transported there via fluids through cracks that formed much later.

In other words, this fine-grained analysis seemed to prove that the first traces of oxygen occurred hundreds of millions of years after the rocks were deposited — not prior to the Great Oxygenation Event.

Slotznick explains that sulfur isotopes and organic material also show that Earth was extremely oxygen-deficient around 2.5 billion years ago. She says the new research is evidence that it’s worth revisiting other studies that point to whiffs of oxygen before the Great Oxygenation Event.

But Ariel Anbar, a geologist at Arizona State University and a co-author of the 2007 paper, disagrees with this interpretation. While he agrees that the mineral grains Slotznick and her colleagues examined may not be as old as the rest of the shale, he doesn’t believe this totally disproves the existence of oxygen traces older than the Great Oxygenation Event.

“We did our best to avoid those minerals but they’re really focusing in on those chemicals,” Anbar says. Furthermore, he says that the new study only focuses on the sulfur and molybdenum, ignoring some of the other lines of evidence that also point to oxygen being in the atmosphere earlier — including in selenium and uranium. “They don’t really provide an alternative [to those lines of evidence],” he says.

On the other hand, Anbar obligingly refers to the work as “very nice, sophisticated analyses” and welcomes further studies on the Mount McRae rocks. “It’s all interpretive, and interpreting ancient environments from ancient rocks is really hard,” he says. “You need to be always skeptical.”