Did Humans and Dinosaurs Ever Live Together?

Thinking that humans lived with dinosaurs makes for a compelling proposition. But dinosaurs and humans have only coexisted in our imaginations. 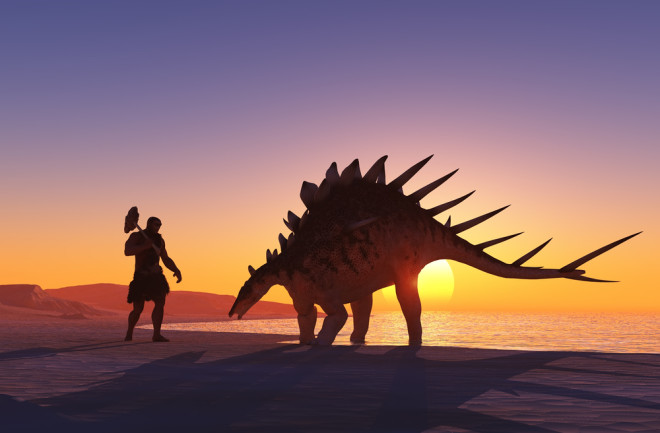 Humans and dinosaurs living in harmony — that didn’t really happen, did it? (Credit: iurii/Shutterstock)

This article was originally published on April 24, 2020.

This question is an easy one to answer — and it’s an unfortunate, but firm, no (with one notable exception). Humans and non-avian dinosaurs never shared planet Earth together. We did not ride them, nor keep them as pets or harness them for domestic labor.

The data here are quite solid. The non-avian dinosaurs died out 66 million years ago, likely when an asteroid struck Earth and the ensuing cataclysm wiped out a large percentage of life on the planet. This included almost every large organism, and most of the small ones as well.

Read more: What Killed the Dinosaurs?

In the aftermath, one relatively humble group was able to carve out a much larger footprint for itself: the mammals. These were the creatures that would one day lead to us, after much evolutionary progress and most of the 60-odd million years separating us from the end-Cretaceous mass extinction.

At some point in the past half-dozen million years, the last common ancestor of humans and chimpanzees and bonobos (our closest evolutionary relatives) split into two groups. One of these would lead one day to humans, passing first through any number of intermediate groups of hominins. Modern humans are currently thought to have appeared around 300,000 years ago — more than 65 million years after the non-avian dinosaurs disappeared.

But, yes, as you may have already pointed out: Not all the dinosaurs disappeared. Birds descended from some of the few dinosaur species to survive the end of the Cretaceous — likely a type of theropod.

So, in a technical sense, birds are indeed dinosaurs, and we are still living with them today. From this standpoint, then, the idea of humans and dinosaurs coexisting is not completely outlandish. We eat dinosaurs, we keep them as pets, they pick at our snacks when we go to the beach. But, just as humans have evolved far from our mammalian ancestors 66 million years ago, birds have also changed significantly.

Ultimately, it’s for you to decide: Are you having dinosaur for dinner tonight, or just chicken?

This story is part of an ongoing series covering readers’ biggest questions about human origins. Read more about ancient humans (and dinosaurs):