Did a Strangely Human-Like Primate Give Rise to Monkeys, Apes, and Us? 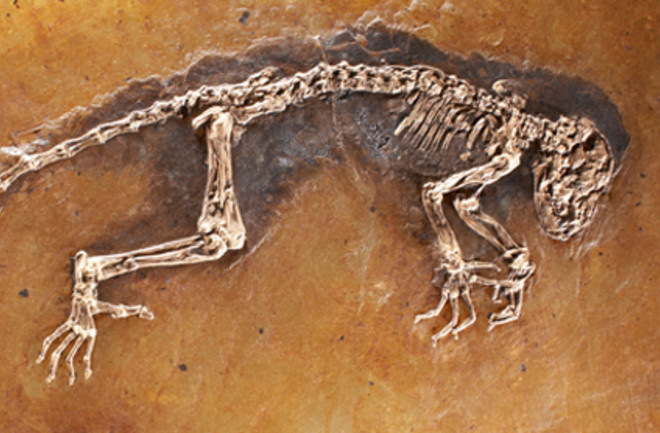 A small, lemur-like creature may have been an early ancestor of monkeys, apes, and humans. A magnificently preserved fossil dating from 47 million years ago reveals an animal that had

, among other things, opposable thumbs, similar to humans' and unlike those found on other modern mammals. It has fingernails instead of claws. And scientists say they believe there is evidence it was able to walk on its hind legs [ABC News].

In a study that will be published in the journal PLoS ONE tomorrow, researchers will report that

this extraordinary fossil could be a “stem group” from which higher primates evolved, “but we are not advocating this” [The New York Times].

The fossil was first discovered in 1983 in the Messel Shale Pit, an old quarry near Frankfurt, Germany that has long been a World Heritage Site because of its rich fossil beds. The specimen was excavated by private collectors but was then divided into two parts and sold; it was only two years ago that scientists reassembled the complete fossil and began studying it.

Described as the “most complete fossil primate ever discovered,” the specimen is a juvenile female the size of a small monkey. Only the left lower limb is missing, and the preservation is so remarkable that impressions of fur and the soft body outline are still clear. The animal’s last meal, of fruit and leaves, remained in the stomach cavity [The New York Times].

The fossil will be unveiled with much pomp and ceremony at the American Museum of Natural History tomorrow, and the History Channel will air a documentary about the find next week. In a final element of the media blitz, a Web site has been launched with full details about the primate fossil, which researchers have nicknamed "Ida." The new research adds to an argument over which of two groups of ancient primates was the evolutionary jumping off point for apes and humans: Was it the tarsidae group, which gave rise to the big-eyed tarsiers found in southeast Asia, or the adapidae group, the precursors of the lemurs found in Madagascar?

The latest discovery bolsters the less common position that our ancient ape-like ancestor was an adapid, the believed precursor of lemurs.... "This discovery brings a forgotten group into focus as a possible ancestor of higher primates" [The Wall Street Journal]