Now that scientists have decoded the chimpanzee genome, we know that 98 percent of our DNA is the same. So how can we be so different? 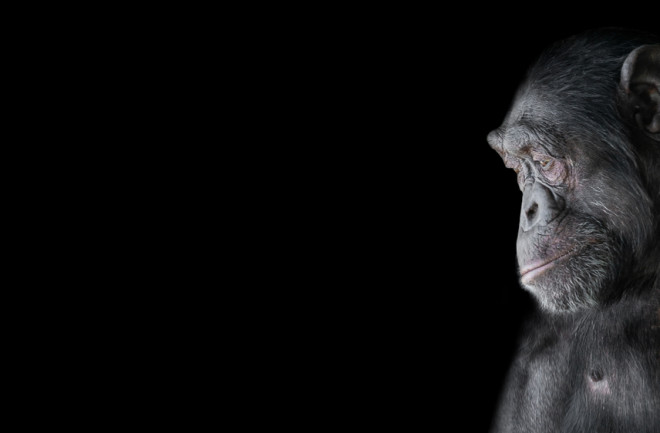 If you find yourself sitting close to a chimpanzee, staring face to face and making sustained eye contact, something interesting happens, something that is alternately moving, bewildering, and kind of creepy. When you gaze at this beast, you suddenly realize that the face gazing back is that of a sentient individual, who is recognizably kin. You can't help but wonder, What's the matter with those intelligent design people?

Chimpanzees are close relatives to humans, but they're not identical to us. We are not chimps. Chimps excel at climbing trees, but we beat them hands down at balance-beam routines; they are covered in hair, while we have only the occasional guy with really hairy shoulders. The core differences, however, arise from how we use our brains. Chimps have complex social lives, play power politics, betray and murder each other, make tools, and teach tool use across generations in a way that qualifies as culture. They can even learn to do logic operations with symbols, and they have a relative sense of numbers. Yet those behaviors don't remotely approach the complexity and nuance of human behaviors, and in my opinion there's not the tiniest bit of scientific evidence that chimps have aesthetics, spirituality, or a capacity for irony or poignancy.

What accounts for those differences? A few years ago, the most ambitious project in the history of biology was carried out: the sequencing of the human genome. Then just four months ago, a team of researchers reported that they had likewise sequenced the complete chimpanzee genome. Scientists have long known that chimps and humans share about 98 percent of their DNA. At last, however, one can sit down with two scrolls of computer printout, march through the two genomes, and see exactly where our 2 percent difference lies.

Given the outward differences, it seems reasonable to expect to find fundamental differences in the portions of the genome that determine chimp and human brains — reasonable, at least, to a brainocentric neurobiologist like me. But as it turns out, the chimp brain and the human brain differ hardly at all in their genetic underpinnings. Indeed, a close look at the chimp genome reveals an important lesson in how genes and evolution work, and it suggests that chimps and humans are a lot more similar than even a neurobiologist might think.

DNA, or deoxyribonucleic acid, is made up of just four molecules, called nucleotides: adenine (A), cytosine (C), guanine (G), and thymine (T). The DNA codebook for every species consists of billions of these letters in a precise order. If, when DNA is being copied in a sperm or an egg, a nucleotide is mistakenly copied wrong, the result is a mutation. If the mutation persists from generation to generation, it becomes a DNA difference — one of the many genetic distinctions that separate one species (chimpanzees) from another (humans). In genomes involving billions of nucleotides, a tiny 2 percent difference translates into tens of millions of ACGT differences. And that 2 percent difference can be very broadly distributed. Humans and chimps each have somewhere between 20,000 and 30,000 genes, so there are likely to be nucleotide differences in every single gene.

To understand what distinguishes the DNA of chimps and humans, one must first ask: What is a gene? A gene is a string of nucleotides that specify how a single distinctive protein should be made. Even if the same gene in chimps and humans differs by an A here and a T there, the result may be of no consequence. Many nucleotide differences are neutral — both the mutation and the normal gene cause the same protein to be made. However, given the right nucleotide difference between the same gene in the two species, the resulting proteins may differ slightly in construction and function.

One might assume that the differences between chimp and human genes boil down to those sorts of typographical errors: one nucleotide being swapped for a different one and altering the gene it sits in. But a close look at the two codebooks reveals very few such instances. And the typos that do occasionally occur follow a compelling pattern. It's important to note that genes don't act alone. Yes, each gene regulates the construction of a specific protein. But what tells that gene when and where to build that protein? Regulation is everything: It's important not to start up genes related to puberty during, say, infancy, or to activate genes that are related to eye color in the bladder.

The genomes of chimps and humans reveal a history of other kinds of differences as well. Instead of a simple mutation, in which a single nucleotide is copied incorrectly, consider an insertion mutation, where an extra A, C, G, or T is dropped in, or a deletion mutation, whereby a nucleotide drops out. Insertion or deletion mutations can have major consequences: Imagine the deletion mutation that turns the sentence "I'll have the mousse for dessert" into "I'll have the mouse for dessert," or the insertion mutation implicit in "She turned me down for a date after I asked her to go boweling with me." Sometimes, more than a single nucleotide is involved; whole stretches of a gene may be dropped or added. In extreme cases, entire genes may be deleted or added.

More important than how the genetic changes arise — by insertion, deletion, or straight mutation — is where in the genome they occur. Keep in mind that, for these genetic changes to persist from generation to generation, they must convey some evolutionary advantage. When one examines the 2 percent difference between humans and chimps, the genes in question turn out to be evolutionarily important, if banal. For example, chimps have a great many more genes related to olfaction than we do; they've got a better sense of smell because we've lost many of those genes. The 2 percent distinction also involves an unusually large fraction of genes related to the immune system, parasite vulnerability, and infectious diseases: Chimps are resistant to malaria, and we aren't; we handle tuberculosis better than they do. Another important fraction of that 2 percent involves genes related to reproduction — the sorts of anatomical differences that split a species in two and keep them from interbreeding.

That all makes sense. Still, chimps and humans have very different brains. So which are the brain-specific genes that have evolved in very different directions in the two species? It turns out that there are hardly any that fit that bill. This, too, makes a great deal of sense. Examine a neuron from a human brain under a microscope, then do the same with a neuron from the brain of a chimp, a rat, a frog, or a sea slug. The neurons all look the same: fibrous dendrites at one end, an axonal cable at the other. They all run on the same basic mechanism: channels and pumps that move sodium, potassium, and calcium around, triggering a wave of excitation called an action potential. They all have a similar complement of neurotransmitters: serotonin, dopamine, glutamate, and so on. They're all the same basic building blocks.

The main difference is in the sheer number of neurons. The human brain has 100 million times the number of neurons a sea slug's brain has. Where do those differences in quantity come from? At some point in their development, all embryos — whether human, chimp, rat, frog, or slug — must have a single first cell committed toward generating neurons. That cell divides and gives rise to 2 cells; those divide into 4, then 8, then 16. After a dozen rounds of cell division, you've got roughly enough neurons to run a slug. Go another 25 rounds or so and you've got a human brain. Stop a couple of rounds short of that and, at about one-third the size of a human brain, you've got one for a chimp. Vastly different outcomes, but relatively few genes regulate the number of rounds of cell division in the nervous system before calling a halt. And it's precisely some of those genes, the ones involved in neural development, that appear on the list of differences between the chimp and human genomes.

That's it; that's the 2 percent solution. What's shocking is the simplicity of it. Humans, to be human, don't need to have evolved unique genes that code for entirely novel types of neurons or neurotransmitters, or a more complex hippocampus (with resulting improvements in memory), or a more complex frontal cortex (from which we gain the ability to postpone gratification). Instead, our braininess as a species arises from having humongous numbers of just a few types of off-the-rack neurons and from the exponentially greater number of interactions between them. The difference is sheer quantity: Qualitative distinctions emerge from large numbers. Genes may have something to do with that quantity, and thus with the complexity of the quality that emerges. Yet no gene or genome can ever tell us what sorts of qualities those will be. Remember that when you and the chimp are eyeball to eyeball, trying to make sense of why the other seems vaguely familiar.