They were the first civilization in Europe to build large palaces, but we still haven’t cracked the code of their language (or their exact origins). 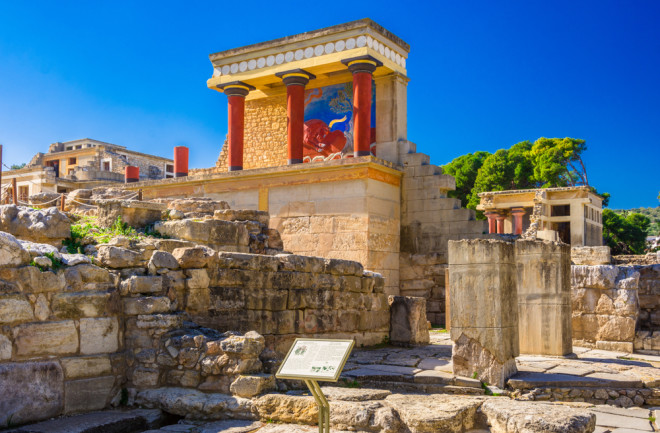 The mythological history of the Greek island Crete goes back pretty far — one of its earliest kings was supposedly the son of the gods Zeus and Europa. King Minos was no benevolent ruler as far as the stories go, demanding a tribute of 14 children from Athens every nine years to feed to the Minotaur (a bull-headed creature with the body of a man).

While we can deduce some things about the building techniques and artwork of the five-millennia-old Minoan civilization on Crete, we know very little about the language they spoke. As a result, it’s unclear where the Minoans arrived from at the dawn of their civilization in roughly 3000 B.C.

“Getting to know the language behind Linear A — the Minoan language — could also give us an idea about population movements,” says Ester Salgarella, a linguist and archaeologist who studies the ancient language of the Minoans at St. John’s College at the University of Cambridge. “Who were the settlers of Crete? Where did they come from?”

What We Know About the Ancient Minoans

In mythological terms, Europa was the mother of one of the earliest known kings of Crete. The story is fitting as the Minoans on Crete were among the first advanced civilizations in Europe. The Minoans were known for constructing a number of grand palaces, such as those at Knossos and Phaistos, some of them featuring artwork that survives today. Scholars first learned of the Minoans when, in the early 20th century, British archaeologist Arthur Evans excavated the Knossos palace. The term “Minoan” was named after the mythical Cretan king by Evans and others, but probably wasn’t used by the ancient people themselves.

On the island, every palace is a citadel, or fortress, surrounded by settlements. These citadels probably served as religious centers and leaders' residences. Because Cretan palaces lack defensive walls and there's no evidence of battles, some archaeologists think that the Minoans lived in relative peace, Salgarella says. They certainly traded among each other, and developed an extensive exchange network that included the ancient Egyptians and civilizations in the Levant.

Our knowledge of the Cretan people’s trade habits comes from their own records, which span more than roughly two millennia and feature three different writing systems. The oldest is referred to as Cretan hieroglyphic, of which nearly nothing has been deciphered. Between one and two centuries later, the next system of writing, known as Linear A, likely emerged. After a period of overlap came Linear B, which eclipsed the preceding writing systems by 1400 B.C. “This is among the oldest evidence of writing on European soil,” Salgarella says.

While it was determined in the 1950s that Linear B was used to jot down ancient Greek, very little is known about what spoken language Cretan hieroglyphics and Linear A were used to record. They may have each encoded a different dialect, and possibly more than two between them. The origin of the Minoans themselves remains unclear, too, but genetic studies of human remains dating to this period reveal that their Neolithic ancestry may go back to western Anatolia (what we know today as Turkey).

“Crete is right on the crossroads of all these trade routes going right across the Mediterranean. Everyone and their brother is visiting Crete,” says Brent Davis, an archaeologist at the University of Melbourne who studies the Minoans.

Linear A has mostly been found on clay tablets, though some is preserved on jewelry, stone vessels and pots. The writing system includes about 80 signs that likely represent distinct syllables, Davis says.

The clay tablets mostly show what look like administrative records. The tablets inscribed with Linear A are similar in appearance to those carved with Linear B, and researchers know the Minoan number system as it’s the same within both sets of characters. Since the administrative tablets of Linear A and B look identical, researchers have deciphered the word “total,” which usually sits at the bottom — “ku-ro” in Minoan.

Researchers have also deciphered a number of words, such as those for wool and fig, based on the fact that they survived in Greek but aren’t of Greek origin. Some proper Minoan names have also been partly translated: Phaistos is certainly written as “Pa-i-to” in both Linear A and B, Salgarella says, and the name Knossos might have come from a Minoan name “Ku-ni-su,” though the latter is less certain.

While they don’t know how they were spoken or pronounced, archaeologists have learned the meaning of plenty more of the signs, like the one depicting “olive oil.” It’s clear that it means olive oil because the Greeks borrowed the same sign, Davis says.

Based on the shape of the scripts, Davis feels there’s more to deduce about Minoan language. With words and sentences available, you can look for patterns in the way they’re put together, he says.

The words contain a large number of prefixes and suffixes, he says, which can be helpful. The word order in certain repetitive orations, or libation formulas, can reveal what may be verbs —– words like “pray” or “wish” that pop up again and again. “These sorts of characteristics tend to tell us which kinds of languages it could be and which it couldn’t be,” Davis says, adding that eliminating possibilities can help archaeologists and linguists focus better on solutions.

Over the past few decades, researchers have laid out several theories behind the Minoan language’s structure. Some claim it’s similar to Indo-European (like ancient Anatolian languages, Greek and nearly every other language found today in Europe). Experts have also guessed that it belongs to the Semitic group, like Hebrew or ancient Egyptian. But Davis has found otherwise. “We’re finding that this language is not constructed anything like these languages,” he says.

He hypothesizes instead that Minoan was an indigenous European language that predated the arrival of the Indo-European culture, similar to the history of Basque. This makes deciphering Minoan more difficult. Other than borrowing some words, the language wouldn’t necessarily have any similarities to Egyptian, Levantine or Anatolian languages. “It’s going to make it a lot harder, but not impossible,” Davis says. But eliminating certain possibilities helps, he adds.

Based on pattern analysis, Davis thinks that Linear A from Crete does represent a singular language. By comparing these patterns with those of Cretan hieroglyphics, both systems may also represent the same spoken tongue.

End of an Ancient Era

Whatever Minoan sounded like, it’s unclear why it was replaced by Linear B in 1400 B.C. The historical record lacks any sign of war or disastrous events. Salgarella is careful to note that Minoans may have continued to speak their language for some time, even if the administrative written language had changed.

A major challenge in analyzing this period is that we really don’t know how literate the population was as a whole. Since these scripts represent some of the first known written languages in the world, it’s possible that not many knew how to use them, especially early on. “The issue of the spoken language is a very difficult and delicate one,” Salgarella says.

Confusingly, a blank period occurred between around 1450 B.C. to 1400 B.C. with no surviving evidence of scripts in neither Linear A nor B. Some speculate that the Mycenaeans from mainland Greece may have conquered Crete in the 15th century B.C., though that remains to be proven.

Deciphering more of the Minoan language would certainly help researchers understand what went down, and serves as further motivation for scholars to get to the bottom of it. “The idea of trying to reconstruct the whole civilization is so interesting,” Salgarella says. “Language is just a piece of the whole.”