Homer's epic poem has fascinated scholars for centuries. But was the Trojan War inspired by historical reality, or are the tales merely myth? 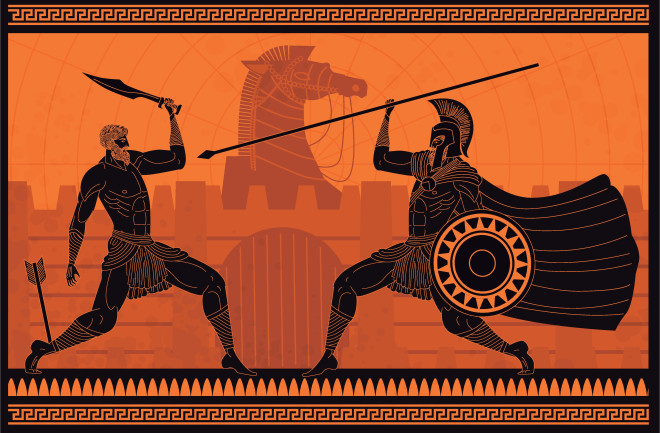 It has bickering and meddling gods, a pouty demigod and a doomed hero, love and heartbreak, triumph and defeat. It’s no wonder The Iliad has influenced western literature for thousands of years.

The word ‘Iliad’ comes from ‘Ilion,’ an ancient name for Troy, and the story takes place in the last few days of the ten-year siege of that city at the end of the Trojan War. The poem is usually attributed to Homer, a Greek poet writing in the late 8th or early 7th century B.C. Homer may have been the sole author, or perhaps was the person who first wrote down a poem adapted from a long oral tradition. In any case, the events depicted in the poem took place several hundred years before it was written.

Much like the Arthurian legends, the story of Troy has been told in many different ways by many different people. Homer’s Iliad is just one telling of one part of the story (and doesn’t even include the wooden horse). Also like the Arthurian legends, it’s difficult to know how much of the legend is based on something that actually happened. Was there a Trojan War? Was Troy even a real city?

Over the last 150 years, archaeologists have answered some of these questions. But there is still a lot to learn about Troy and the legends that surround the ancient city.

Keep Digging, It’s Down There Somewhere

In the 19th century, Frank Calvert, an English scholar who became both a U.S. and a British diplomat in Turkey, settled near Hissarlik in Western Turkey. As a skilled (though amateur) archeologist, Calvert did some preliminary excavation, believing he'd discovered the location of the fabled Troy based on earlier research by Charles MacLaren, a Scottish journalist and scholar. However, Calvert didn’t have the money to finance a proper dig.

Heinrich Schliemann, however, did. Schliemann was a wealthy German businessman and self-taught archaeologist. By the nineteenth century, most scholars thought the Trojan War was a legend with no basis in fact, and Schliemann was keen to prove them wrong. After Calvert told Schliemann that Hissarlik might in fact be Troy, Schliemann retired from his business interests and committed his fortune to finding the ancient city — and proving the Iliad’s description of its ending was historically accurate. In 1870 he began to dig at the site MacLaren and Calvert had identified. And, sure enough, he found Troy.

Schliemann did a lot of things wrong, though. He didn’t give MacLaren and Calvert credit for identifying the site. He also began digging before he had official permission from the Turkish government. But perhaps his worst mistakes were archaeological. After having little luck to start, in the third season of excavation he dug a huge trench across the site, going down 45 feet. In his determination to find the Troy of legend, he bulldozed through many layers of important archaeological evidence, essentially tossing aside anything that didn’t support his goal of finding Homer’s Troy. Nonetheless, archaeologists have continued excavating the site and have made plenty of important discoveries in the remains of the city — or cities. In actuality, there were nine of them.

Whenever Troy was destroyed, most often by fire or earthquake, the survivors rebuilt the city right on top of the ruins of the previous Troy. The continued occupation and rebuilding of this city is probably because of its location. Troy stood at the entrance to the Dardanelles (also known as the Hellespont), a narrow strait that connects the Black Sea with the Aegean, a key position for trading. The site was also strategic for land trade, located as it was along the route between Anatolia (Asia Minor) and Europe.

The first Troy, a small village, dates to about 3,000 B.C., in the early Bronze Age. Troy II  (archaeologists date them starting at the oldest on the bottom and working up) was a somewhat larger settlement surrounded by a sturdy wall. By around 1750–1180 B.C., the late Bronze Age, the cities had become even more fortified. Troy VI and VII were surrounded by thick sloping walls and contained impressive buildings. Later Troys show continued growth and prosperity for the fabled city. There is some evidence that horse breeding and textile production may have contributed to Troy’s wealth.

Are the Legends True?

So which Troy is Homer’s Troy? Is the story of the Trojan War, as told and retold in legend, based on a real historical event? Did Achilles chase Hector around the intimidating walls of Troy VI? Unlike Schliemann, archaeologists studying the site today aren’t trying to find evidence one way or the other for the veracity of The Iliad. However, what they have found offers some clues.

Schliemann thought Troy II was the setting of Homer’s poem, but carbon dating and pottery analysis have shown it to be at least 1,000 years too old to fit the description in The Iliad. Troy VI and VII — mid to late Bronze age — are more likely. Troy VI was destroyed by an earthquake, though, not Agamemnon’s armies. Survivors rebuilt the town, but it, too, was destroyed within a generation. It was sacked, burned, and pillaged — and most significantly, rebuilt not by survivors but by another people entirely. So here we have a Troy that was destroyed in war, and the time period, late Bronze Age, matches details from the poem.

Is this Homer’s Troy? Maybe. Some archaeologists think it is likely that the war that destroyed Troy VII was the war that inspired The Iliad and other poems. Others are not so sure.

In any case, literature isn’t supposed to be history. By the time Homer wrote his poems, as many as 500 years after the Trojan War would have taken place, the city was already a ruin. It’s possible, even likely, that when the poet wanted to tell a story of Gods and heroes, he used the ruins of Troy (and the stories that grew up around it) as both inspiration and setting. Homer and his fellow artists were free to take liberties with the tale, adding avenging husbands and jealous goddess as they saw fit. Whether or not the poem got the history right, or was simply a brilliant fiction, the story of Troy is still beloved almost three thousand years later.