Chimpanzees Drum on Trees to Communicate

Two new studies reveal some of the reasons why our closest living relatives drum on tree roots — and even whip up their own signature sounds. 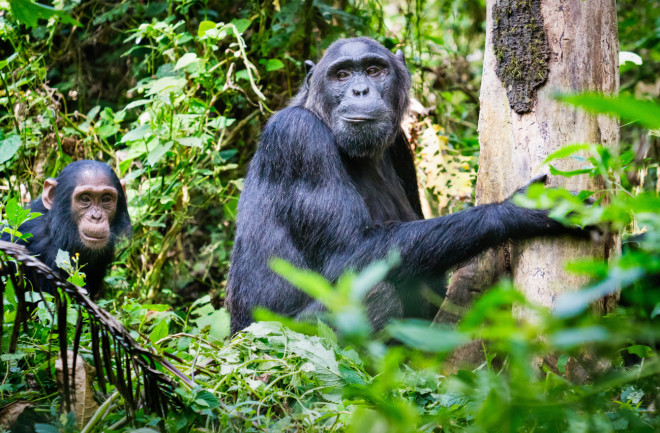 The drumbeats are let out in short bursts across the rainforest — a deep but quick staccato. The Nimba Mountains of Guinea provide a spectacular backdrop for the short performance, with their tall peaks and deep valleys, yet it’s the performers themselves — chimpanzees — that have researchers flocking to the forests.

The apes there have a habit of drumming on the tops of roots that stretch from the base of tree trunks. Jane Goodall and others have long assumed that this behavior represents a form of communication between chimps. But researchers didn’t empirically test the hypothesis until recently.

From January 2012 to April 2014, primatologist Maegan Fitzgerald and her colleagues tracked down 19 of these drum trees and measured their properties. They additionally analyzed similar trees nearby, which the chimps didn’t choose to drum on. As part of the Re:wild organization, dedicated to protecting and restoring nature, the researchers sought to understand whether the chimps had any discerning tastes when it came to the tree drums.

Tools of the Trade

Of course, tracking chimps around the forest wasn’t always easy; according to anecdotal evidence, the drumbeats are audible to humans more than half a mile away. That meant that once the researchers finally arrived at a tree’s location, even the encore performance was long finished.

Luckily, chimpanzee rhythms have a lasting impact … on the trees, at least. Their feet or hands leave traces on the buttresses that are specific to each drumming behavior. In a study published in the American Journal of Primatology this year, Fitzgerald and the rest of the team report the types of tree buttresses (the parts of roots closest to the tree trunk) that chimps chose.

They found that chimps preferred trees with a larger trunk diameter, often from species like Piptadenia africana or the African locust-bean. On these big trees, the apes also seemed drawn to thinner buttresses, with a larger surface to drum on. These create a resonant, low-frequency sound that could travel longer distances. “It’s a goal-directed behavior, this drumming,” Fitzgerald says.

Chimpanzees socialize in larger groups, numbering in the dozens at times. Other times, they split into smaller groups of a dozen or less. When they split apart, drumming on trees may be a way to communicate between individuals and groups. “It appears that a chimpanzee will drum, then sometimes even sit on the buttress. Then you can hear a response off in the distance,” Fitzgerald says, adding that the researchers have witnessed this behavior on trail camera footage.

It would be difficult to prove this definitively, but Fitzgerald says that she and other researchers yearn to test how far these drum signals might travel. The chimps don’t seem to drum often in low valleys — places where their sound is likely not to travel very far. But future studies could also examine whether chimps are choosing the best places to project their sound over a long distance, such as the tops of mountain ridges.

Another potential explanation is that chimps may use these rhythms to demonstrate their relative place on the pecking order to those nearby, similar to gorillas beating their chests. One recent study conducted by Vesta Eleuteri, a PhD candidate and cognitive biologist at the University of Vienna, and her colleagues supports this finding. It showed that chimps have two kinds of drumming behavior that they use in different contexts.

The research team recorded chimps drumming in Uganda, then analyzed the sound waves. As it turns out, each male drummer utilized a kind of signature sound while traveling. These signature sounds are used to identify themselves to others far away, more evidence that drumming is long-distance,” Fitzgerald says. The chimps also created more generic sounds, which Eleuteri and her team believe are used to communicate with others nearby.