Are Chimpanzees Capable of Empathy?

Researchers investigate pro-social behavior in Gabon’s chimps, which appear to apply insects as medicine on the wounds of fellow apes. 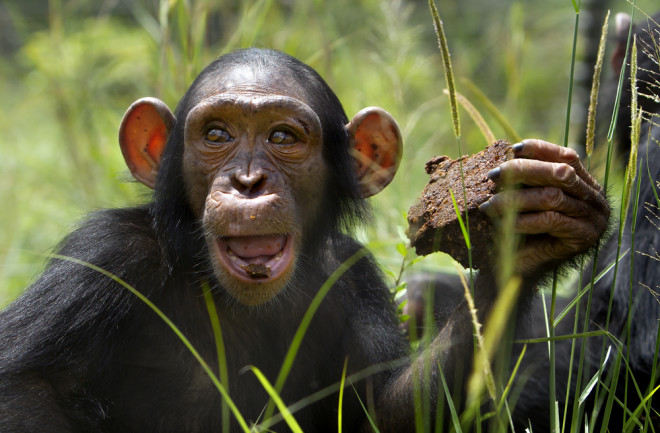 Three years ago in the central African country of Gabon, a mother chimpanzee, Suzee, lounged on the forest floor with her two offspring, Sassandra and Sia. Sassandra scrambled up and down the trunk of a nearby tree, while Suzee casually swiped an insect from the underside of a leaf and placed it between her own lips. The action sparked curiosity in Sassandra, who reached for the object, but Suzee pushed her aside playfully. Then the mother chimp took hold of Sia’s nearby foot and placed the insect onto an open wound.

The moment did not seem particularly important to the chimps, who quickly returned to lounging and playing in the landscape of Loango National Park. But, their behavior had piqued the interest of a volunteer, Alessandra Mascaro, who sat nearby filming the interaction. Some time later, Mascaro showed the video to Simone Pika, a University of Osnabrück professor and co-director of the Ozouga Chimpanzee Project in Loango. Pika was intrigued. “We told everybody, ‘if there is a chimpanzee in the field with a wound, please try to film any wound tending they are doing,’ ” she says.

Just a couple of weeks later, a volunteer watched as another chimpanzee placed an insect on an open wound, this time on its own body. Over the course of 15 months, the researchers recorded 19 more cases of chimps applying insects to cuts and scrapes. Mascaro’s observation was not a random occurrence; this behavior was deliberate and ubiquitous among the chimpanzees of Loango.

It’s become another strong indicator how the concept of medicine can extend far beyond humans. Throughout the living world, ants, caterpillars and fruit flies all use natural substances like resin, plant toxins and alcohol to ward off virulent parasites. Chimpanzees, bonobos and gorillas eat rough and astringent leaves to purge intestinal parasites. It is possible that the application of insects is another form of self-medication — perhaps the bugs ward off infection or have analgesic properties.

“If you go into the entomology literature, there are all sorts of substances in insects that could impart different benefits,” Pika says. “We have a lot of ideas, but no proof yet.”

In the coming seasons, Mascaro, who is pursuing funding for a Ph.D. position in Pika’s lab, aims to investigate the many hypotheses. But, regardless of the insects’ function, the behaviors of Loango’s chimps evoke questions about the prevailing knowledge of self-medication in animals. While past theories have proposed that individual animals use natural substances for personal benefit, some of the chimps in Pika and Mascaro’s study treated each other’s wounds. To Pika, this is evidence of a long-debated theory: that chimpanzees, like humans, are inherently motivated to offer help when a fellow chimp is hurting.

“This is for sure evidence of prosocial behavior, which is defined as increasing the welfare of another being,” Pika says. “It doesn’t necessarily mean that they are empathetic, but we can show that they are doing something to make the other chimp feel better.”

While we may never know the details of the chimps' motivations, their behavior appears to be community-minded. Perhaps it is an indication that altruism is not limited to Homo sapiens.

Read More: Animals Respond to Death in Many Ways. Mourning Might Be One of Them.

If Mascaro finds that a benefit is imparted on wound healing from the application of insects, the research could have even further implications. Charismatic animals like chimpanzees inspire conservation efforts, philanthropy and research. But, these animals cannot be conserved separately from the ecosystem in which they reside. Something as insignificant as a tiny insect on the underside of a leaf might be essential to their way of life, or even their survival.

“We’ve seen funding cuts for field research and an increased focus on lab-based studies,” Pika says. “If we want to protect the chimpanzees, we also need to protect the habitat. Connected to these chimpanzees are many, many more species.”