By 2100, Up to Six Natural Disasters At Once Could Threaten Some Areas 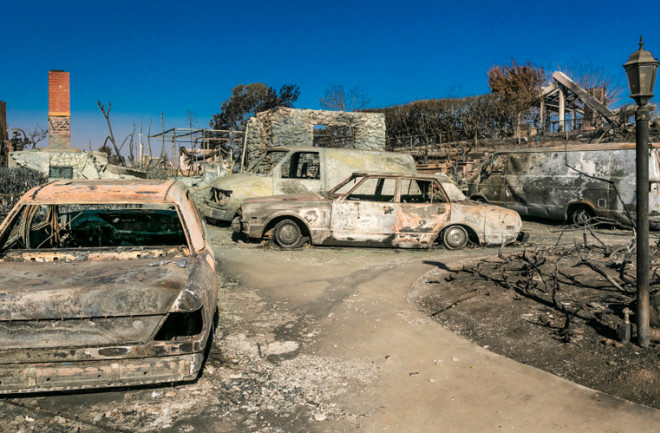 Destroyed homes and cars in Ventura, California after the 2018 Thomas Fire. Wildfires and other climate-related hazards will be more commonplace over the next century, a report predicts. (Credit: Joseph Sohm/Shutterstock)

If you think recent natural disasters have been terrifying — just wait. Things will only get worse over the next century, a group of leading climate change researchers warns in a paper published in Nature Climate Change this week.

Currently, most places suffer just one climate-related disaster at a time. But by 2100, regions can expect to grapple with multiple disasters at once, they researchers say.

“We are facing an incredible threat to humanity,” said lead author Camilo Mora of the University of Hawaii at Manoa. “We are sensitive to the hazards that have been triggered and unfortunately these hazards are only going to get worse.”

To better understand the threats that lie ahead, Mora and his colleagues reviewed more than 3,200 scientific papers and found 467 ways that climate change has already impacted humanity. The report chronicles how climate hazards such as heat waves, wildfires, floods and sea level rise have impacted human disease, the food supply, economies, infrastructure, security and other aspects of society.

“I couldn’t stop being so frightened every single day, to be honest with you,” Mora said.

The research team created a supplemental, interactive world map based on peer-reviewed projections. It demonstrates the overlapping impacts of climate change on human populations in the coming century. By the turn of the century, for example, people in New York could be faced with four separate climate hazards, including drought, sea-level rise, extreme rainfall and higher temperatures. On the other side of the country, Los Angeles will likely face up to three. Especially vulnerable tropical regions of the world could deal with as many as six threats at once.

The report predicts that developing nations will face larger losses of human life, whereas the developed world will endure a high economic burden associated with damages and adaptation.

Although climate change has been studied extensively, Mora said previous research isolates the impact of one or two hazards rather than providing a big picture view of the consequences of global warming. That’s likely not going to be the reality though, when climate change poses so many concurrent dangers.

For example, an increase in atmospheric temperature can exacerbate soil moisture evaporation in dry places, which leads to droughts, heatwaves and wildfires. In wet places, extreme rain and flooding may occur. As the oceans warm, water evaporates more quickly, causing wetter hurricanes with stronger winds and extreme storm surges from rising sea levels.

Mora hopes the science will ultimately inspire people to become a part of the solution. Even grassroots community efforts, like Hawaii’s “Go Carbon Neutral” project, which aims to offset carbon emissions through tree planting, and which Mora is involved with, can add up and help change the course of climate change, he said.

“This is a fight we cannot afford to lose. We don’t have any other planet to go to.”