Baby corals swim home by following the sounds of reefs

It’s the open ocean, and a small animal is swimming home. Listening out for the hustle and bustle of a coral reef, the creature changes direction and heads straight towards the sound. If it eventually arrives at its destination, it will settle down and add to the reef's mighty structures. This intrepid traveller is a baby coral. We’re used to thinking of corals as inert hunks of intricately shaped minerals but these rocky structures are merely the corals’ homes. The animals that live within are small and tentacled, looking a lot like the sea anemones that they’re related to. As larvae, corals look even stranger. Less than a millimetre in length, they swim freely in the open ocean amidst other plankton. Only later do they find a suitable place to settle down and get on with the adult business of reef construction. These young corals have an unexpectedly amazing way of finding their way to the right site. According to Mark Vermeij from the University of Amsterdam, they 'listen' for the sounds of a reef. Other oceanic babies do the same thing. Stephen Simpson, who was also involved in this new discovery, has previously showed that the larvae of both fish and crustaceans can used sound to find a home. Chemical cues can also lead them down the final leg of the journeys, but the din of a noisy reef carries further and is independent of currents. These acoustic signposts help them point in the right direction at the start of their treks. Vermeij discovered this uncanny homing ability by collecting newly fertilised coral eggs off the Caribbean island of Curacao. The youngsters were raised in a lab and placed in six Plexiglas tubes pointing towards three underwater speakers. The speakers churned out a compilation album that may well have been called Now That’s What I Call Reef Music 2009 – a mash-up of the crackling beats of snapping shrimps laid over a background of fish calls and grunts, all sampled from local reefs. 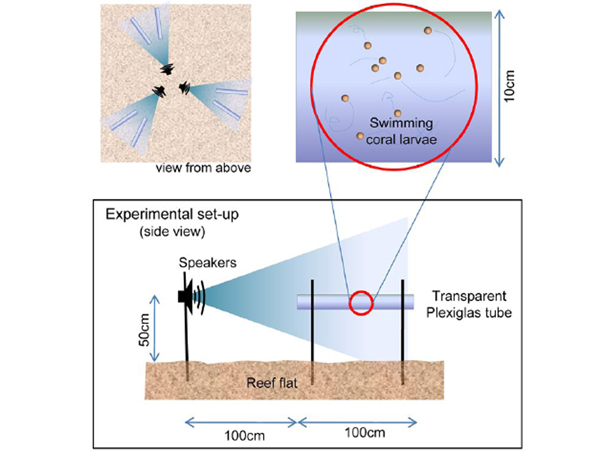 If the speakers were silent, the baby corals were evenly spread throughout the tubes. But when the underwater mix started playing, the corals headed towards it, with over 40% of them clustering at the end of the tubes closest to the speakers. And if the tubes were placed half a metre below the speakers, the larvae clustered towards their upper surface. Many things could affect the movement of a coral larva, including the tides, moonlight and enticing smells. But none of these mattered in the tank, which was isolated from the wider ocean. The fact that all of the tubes were angled like the spokes of a wheel also rules out the possibility that all the corals were swimming in the same direction, influenced by some external pull. It’s clear that these future reef-builders are capable of hearing underwater sounds and swimming towards them. It seems bizarre that a simple coral larva could hear sound but we’re probably still thinking about these animals as rocky reefs rather than the living animals they encase. Previous studies have shown that coral larvae can see (detect light), touch (respond to textures) and smell (detect chemicals). Now, we know that they can also hear. Vermeij thinks that they do it with tiny hairs called cilia that coat their bodies. As sound waves move through the sea, they cause water molecules and other particles to move up and down. These jiggling particles waggle the cilia, telling the corals where to head. For the moment, it’s not clear if the larvae can tell the difference between reef sounds and general underwater noises. That’s an important question because the oceans are becoming noisier places, thanks to shipping, industry, drilling and military tests. This cacophony can easily drown out the sound of shrimps and fish. Underwater noise pollution already poses a problem for many animals including whales and dolphins. Do corals, many of which are already facing extinction, face the same problems? Reference: PLoS ONE http://dx.plos.org/10.1371/journal.pone.0010660. More on corals: