Worrying slowdown of coral growth in the Great Barrier Reef

It's not a good time for corals. Last year, a third of coral species went straight into the endangered lists after being assessed for the first time, and it looks like 2009 isn't going to bring any reprieves to the doom and gloom. In particular, a new study provides hard evidence that the mightiest of coral super-colonies - the Great Barrier Reef - is in trouble.

Like reefs across the world, the Great Barrier Reef faces many threats, including pollution, physical destruction, predatory starfish and perhaps most importantly, the many effects of climate change. Glenn De'ath and colleagues from the Australian Institute of Marine Science have found that the corals among this greatest of reefs are starting to yield under these multiple assaults, adding new material to their limestone skeletons at ever-declining rates. The Reef's growth is slowing to a worrying degree, the likes of which are unprecedented in at least the last 400 years.

De'ath's group focused on one group of corals called Porites. They are a widespread and important group, and like most of their kin, they build reefs by laying down external skeletons of aragonite, a version of calcium carbonate or limestone. Like trees, they have annual growth rings that reveal how quickly they expand. And because coral growth depends on a variety of environmental conditions, the skeletons of the Porites provided a potted history of environmental changes, recorded in unchanging limestone.

De'ath analysed the health of 328 colonies of Porites corals, hailing from 69 separate sites across the entire 2,000 km length of the Great Barrier Reef. The samples were collected between 1983 and 2005 and included individuals as young as 10 years of age and old-timers well into their 400s. 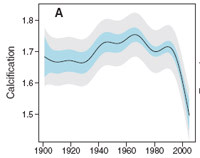 The team used X-rays to study each colony's growth rings and measure how quickly it had laid down new aragonite across the years. They worked out growth rates for all the colonies over the last century and found that they were actually thriving for most of it. The Reef's growth rate had been accelerating since 1900 but that all changed at about 1970, when the corals went into a calcium recession. Since 1990, the Reef's growth has slowed by about 14% and it's getting even slower. The rate of growth is now even lower than it was in 1900.

For 10 of the colonies, they drilled deep into the corals to extract samples reflecting over four centuries of growth. With this data, they could compare the recent slowdown to the Reef's performance since 1572, when Elizabeth I was still Queen of England. Sure, it's a small sample size, but the record showed the same pattern as the more recent one - the Reef had been prospering for over 400 years, adding calcium at ever-increasing rates until it hit a big downturn in the 1960s.

The Reef is clearly adding new material, but slower growth gives it less chance of replenishing any material lost through human activities, natural disasters or catastrophic "bleaching" events. And what's bad news for the corals is bad news for the tens of thousands of species that depend upon their limestone edifices for their very existence.

Obviously, this study only looked at one group of corals, but there's no reason to believe that other species won't be similarly affected. If they are, the Reef could already be severely compromised. The task at hand is to now understand why, and to do so urgently.

There are many potential explanations but the sheer scale of the problems and their recent impact allows us to rule out most of these possibilities. For example, corals can take a hit from pollution from agricultural and industrial activity, winding its way to the sea. But only reefs near the shore would be affected in this way and De'ath found that even offshore reefs, far beyond the reach of run-off pollutants, are suffering from falling calcification rates.

The study only looked at visibly healthy colonies, which rules out the impact of disease. Water quality and cloud cover can affect the growth of corals but there's no evidence that either has changed substantially over the entire span of the Reef.

Natural factors are unlikely to explain the decline either. Corals can obviously limit each other's growth by competing for space or resources. But the total coral cover of the Reef has either remained stable or gone down in recent years, which makes it very unlikely that an opponent group is behind the decline of the Porites.

The extreme degree of the recent changes also excludes the possibility that they could be driven by natural cycles of change that the oceans undergo, such as the Pacific Decadal Oscillation, a cycle of rising and falling temperatures that runs its course every few decades or so. If this cycle was responsible, declines of today's magnitude would also be evident in centuries past, and that isn't the case. Instead, old coral skeletons show that the Reef has been steadily growing for centuries, until the last few decades.

Crossing out these explanations crossed out, that leaves two - rising temperatures and falling pH levels leading to fewer available carbonate ions. Both are big-scale changes, both have happened fairly recently and both have a massive impact on the growth of corals. And both are a result of increasing carbon dioxide levels in the atmosphere.

More carbon dioxide means more global warming, which means hotter seas. Corals actually tend to lay down more calcium if the surrounding water gets warmer. But studies have found that the opposite happens when temperatures fluctuate abnormally, as has been the case in recent years. Hotter waters can also prompt corals to expel the algae that give them their colours and allow them to draw energy from sunlight. Without the algae, the corals soon whiten and die - a "bleaching" event.

The extra carbon dioxide in the atmosphere also means that more of the gas is dissolved in the oceans, which makes them more acid. That depletes the carbonate ions that corals need to build their aragonite fortresses, and since the dawn of industrialisation, the carbonate content of the oceans has fallen by 16%. The corals are builders with a diminishing supply of mortar.