One in three species of reef-building corals face extinction

If you've never had the pleasure of swimming among a coral reef, you might want to get your chance sooner rather than later. Yesterday, the journal Science published the first comprehensive global assessment of the status of the world's reef-building corals, and it's results don't make for comforting reading. Almost a third of the 700-plus species surveyed face extinction; no group of land-living species, except possibly for the amphibians, are this threatened.

A team of 39 scientists led by Ken Carpenter, director of the Global Marine Species Assessment gauged the extinction risk faced by the world's corals by using the International Union for Conservation of Nature's (IUCN) famous Red List Criteria. These criteria measure extinction risk by looking at how quickly a population's size falls over time. That sort of rigorous census data simply isn't available for most corals, so Carpenter's team settled for the next-best alternative - the rate at which a species' habitat is lost within its known range. The results were adjusted for traits, such as the life cycle of each species and how resilient they are to habitat loss.

The results showed that the outlook for corals has worsened considerably in just the last 10 yeras. The team looked at the fates of 704 species and deemed that 176 were Near-Threatened, 201 were Vulnerable, 25 were Endangered and 5 poor species were Critically Endangered. Using earlier data, the team found that had the analysis been done in 1998 (before a mass "bleaching" event killed off large swathes of coral), only 20 species would have been classified as Near-Threatened and only 13 would have made it into the more severe categories.

It goes without saying that the extinction of a third of the world's reef-building corals would be nothing short of an ecological disaster. Coral reefs harbour the greatest diversity of life of any aquatic ecosystem. Entire assemblages of species depend on their intricate structures for shelter and food. If the corals die, so too will the creatures that depend on them and at last count, about a quarter of oceanic species live in coral reefs.

Humans will suffer too. Aside from the loss of some of the planet's most visually striking habitats, coastal economies will suffer as falling biodiversity feeds fewer mouths and dead, colourless reefs attract fewer visitors. Reefs also act as physical barriers that protect coastal communities from the threats of erosion, floods and storms.

It is ironic then that most of the threats that corals face are man-made, and they come in forms both global and local. Close to home, our impact has been more direct. Destructive fishing methods like trawling wreck them directly, while increased sedimentation and pollution lower the quality of the surrounding water and render them vulnerable to disease. But at a worldwide scale, the threats faced by corals are just as great.

As rising carbon dioxide levels warm the globe, the oceans become both hotter and more acidic. Corals are particularly vulnerable to climate change, for unlike most other animals, they don't have the option of getting up and moving to areas with more hospitable temperatures. The heat causes many species to expel the algae that normally live inside their limestone shells. The algae are symbionts, providing the corals with energy from photosynthesis; they also give the corals their resplendent colours. Without these lodgers, the corals' hues fade (known as "bleaching") along with their energy supply.

Meanwhile, the increasingly acidic water depletes valuable carbonate ions that corals need to build their mighty limestone reefs. Like builders with no mortar, they find it hard to erect their homes. Both these dangers - bleaching and acidification - make corals more vulnerable to other threats including direct human damage, disease and the ravenous coral-munching crown-of-thorns starfish.

The dangers facing corals have a nasty tendency to magnify each others' impacts. This is especially apparent in the triangle of water bordered by Malaysia, Indonesia and the Philippines, where dense human populations exacerbate the effects of changing climate and where the greatest proportion of vulnerable species live.

Not all corals are equal in their vulnerability. Three groups - the Acroporidae, Dendrophyllidae and Euphyllidae - are at greatest peril, due in part to their susceptibility to bleaching. About half of all species have been classified as Threatened or worse and Caribbean reefs have been severely hit by the dramatic decline of two of these - the iconic staghorn coral (Acropora cervicornis; middle image) and the elkhorn coral (Acropora palmata; top image). 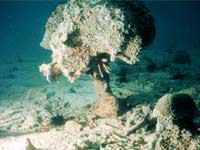 The corals are an ancient group that have persisted through tens of millions of years of shifting climate. No doubt climate change deniers will point to their dogged perserverance as cause for relaxation. And yet, there is plenty of evidence that several coral species have gone extinct in the past - indeed, 45% of all corals died off at the same time that the dinosaurs waved their last goodbyes, and those that relied on symbiotic algae were the hardest hit.

Reefs are built over millions of years and it make take a very long time indeed for corals to recover from the damage that's already been visited upon them. One Caribbean species - the boulder star coral (Montastraea annularis) illustrates this point. It is the largest and most abundant reef-building coral in the region but in many reefs, it has relinquished its dominance. It grows slowly but dies easily; within mere months, bouts of disease can kill off colonies that took 500 years to grow.

Reefs in the Pacific and Indian Oceans are showing signs of recovery from recent warming events but even though 6% of reefs recovered from the 1998 crisis, a larger 16% were irreversibly destroyed. Their continued survival depends on how often similar events will strike in the future. If bleaching events become more and more common, their decline may become irreversible. Carpenter's paper ends with the following sobering sentence:

"Whether corals actually go extinct this century [emphasis mine] will depend on the continued severity of climate change, extent of other environmental disturbances