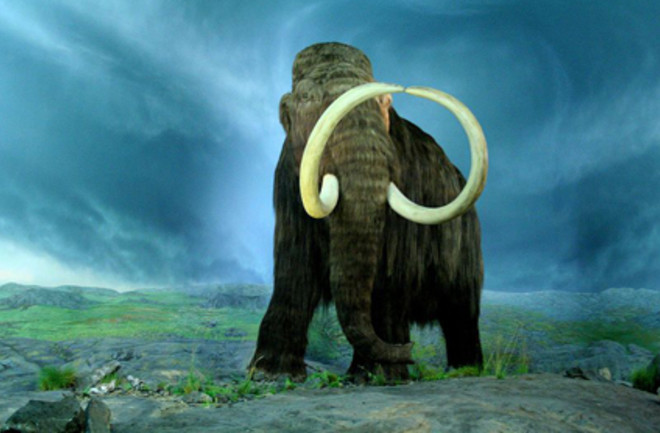 It took more than being woolly for woolly mammoths to survive the wintry climates in which they lived. A new study in Nature Genetics suggests that the weighty mammals had hemoglobin in their blood that could keep oxygen moving even at low temperatures, giving them a kind of "antifreeze" blood:

For the mammoth, this meant that they could keep extremities cool and concentrate heat internally, minimizing heat loss. In addition, it meant that when food was scarce they could live on less of it since they didn't need as much heat (or calories) to move the oxygen to the tissues [The Guardian].

Researchers figured this out through a lengthy process of analyzing 43,000-year-old mammoth remains unearthed in Siberia. But to understand the secrets of this huge creature, they had to enlist the help of a microorganism.

The mammoth DNA sequences were converted into RNA (a molecule similar to DNA which is central to the production of proteins) and inserted into E. coli bacteria. The bacteria faithfully manufactured the mammoth protein. "The resulting haemoglobin molecules are no different than 'going back in time' and taking a blood sample from a real mammoth," said co-author Kevin Campbell, from the University of Manitoba in Canada [BBC News].

Reindeer, musk ox, and other creatures of cold areas have evolved similar means to survive in Arctic habitat. But what was most exciting for the researchers was finding that the mammoth "antifreeze" works with a totally different sequence of amino acids, creating a totally different solution to the same problem. Evolution had plenty of time to figure this one out: Scientists estimate that the creatures that would become woolly mammoths

left Africa and split off from the other elephants between about 1.2 and 2 million years ago. While modern elephants evolved large ears and other means to stay cool in the African heat, the woolly mammoths evolved antifreeze blood. The study was a long time coming, because building a time machine to reconstruct the DNA of long-gone animals took a global team.

Dr. Campbell needed mammoth DNA (from Siberia) and then experts (from Australia) to sequence that with the genetic information from an Asian elephant's hemoglobin (from Canada) with additional help from scientists (in Japan) -- truly an international team.

"No single lab in the world could do what we wanted to do. No one person has the expertise," said Dr. Campbell. "Because it's so ridiculous what we wanted to do: To bring something back to life after 20,000 years and study it. But we did it" [Pittsburgh Post-Gazette].

80beats: The Last Mammoths Made a Round Trip Across the Bering Land Bridge

Discoblog: Desperate Mammoths Turned to Eating Their Own Dung

Are Cooking Fumes Bad for Your Health?

More From Discover
Mind
Brains Might Sync As People Interact — and That Could Upend Consciousness Research
The Sciences
Why Human Foreskin Is a Hot Commodity in Science
Health
Hugging Is an Evolutionary Tool for Survival
Health
Were Humans Born to Walk Barefoot?
Health
Meet Your Lymphatic System: A Key Part of the Immune System
Health
Are European Sunscreens Better Than Those in the U.S.?
Recommendations From Our Store
My Science ShopCosmos: Possible Worlds
My Science ShopStrange Science
My Science ShopEinstein's Universe
My Science ShopElements Flashcards
Shop Now
Stay Curious
Join
Our List