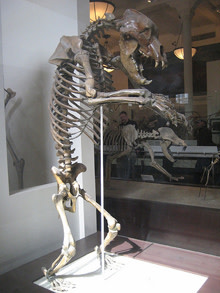 A cooling climate, not human hunters, were at fault for the extinction of the prehistoric cave bear (Ursus spelaeus), according to a new study. Researchers examining cave bear remains now say the giant vegetarians died from starvation and much earlier than previously thought.

"The disappearance of the cave bear around 27,500 years ago was probably due to the significant decline in quantity and quality of plant food, which in turn was the result of marked climatic cooling," [Telegraph] said researcher Anthony J. Stuart.

Previous radiocarbon dating of cave bear remains incorrectly placed their apocalypse at 14,000 years ago because some of the remains were actually those of brown bears, still alive today, that were mistakenly identified. The new study excludes previous errors and includes new data taken from remains found in ancient hibernation sites in the Alps.

The new extinction date, 27,800 years ago, coincides with a period of significant climate change, known as the Last Glacial Maximum [or Ice Age], when a marked cooling in temperature resulted in a reduction or total loss of the vegetation that the cave bears ate (today’s brown bears are omnivores) [LiveScience.com].

The researchers estimate that cave bears weighed more than 2,000 pounds, nearly twice that of modern Kodiak and polar bears, which average 1,100 pounds. Skull anatomy, bone collagen, and teeth suggest their hefty size was supported by a predominantly vegetarian diet. They also appear to be exclusively European, with a range that extended from Spain to the Ural Mountains in western Russia.

"Its highly specialized mode of life, especially a diet of high-quality plants, and its restricted distribution left it vulnerable to extinction as the climate cooled and its food source diminished," [LiveScience.com] said researcher Martina Pachar.

The last Ice Age, which covered much of Eurasia with ice sheets, would eventually spell doom for other "megafauna," including the woolly mammoth, woolly rhinoceros, giant deer, and cave lion. Although hunting by early humans is thought to have played a role in the extinction of some species,

there is no evidence to suggest they also hunted the cave bear.

In fact arrangements of cave bear skulls and bones found in caves used by ancient tribes suggest they revered the animal and treated it as a god [Telegraph].

Related Content: 80beats: The Last Mammoths Made a Round Trip Across the Bering Land Bridge DISCOVER: Why We Have Ice Ages