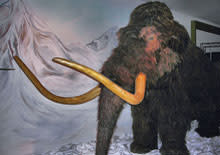 The last woolly mammoths, who tromped around the Siberian tundra before going extinct about 10,000 years ago, had North American roots, according to a new genetic analysis. Scientists studied DNA from the remains of 160 mammoths from across North America and Eurasia, and determined that the last remaining mammoths were migrants who had come to Siberia via the Bering land bridge, and somehow replaced the endemic population. Researchers believe that mammoths originally spread from Asia to North America via the land bridge, creating two genetically distinct populations. Now, they're hypothesizing that some members of the North American group eventually made a return trip and proved hardier survivors than the Siberian group.

"For some reason the North American guys went back over and became kings," says [lead researcher] Hendrik Poinar [New Scientist].

The report, which will be published in next week's Current Biology [subscription required], says that the Siberian group died out completely around 40,000 years ago. Says researcher Ross MacPhee:

"That we find such complete disappearance of the early Siberian groups is pretty remarkable.... It sounds like something really bad happened around 40,000 years ago that resulted in their collapse on that continent" [Scientific American].

though Dr. Poinar suspects it isn’t coincidental that the Siberian animals began to die out when the North American animals started arriving [The New York Times].

Researchers don't know what caused mammoths to eventually go extinct, but have speculated that it may have been a combination of environmental changes at the end of the last Ice Age combined with the new pressure of clever, spear-hurling hominids.

Dense forests replaced open grasslands – the mammoth's preferred habitat, and the Bering land bridge vanished. The appearance of humans may have been a tipping point. "I certainly think that humans probably played a role and to some effect contributed to the ultimate demise of these guys," Poinar says [New Scientist].