Animals’ ‘Fear of New Things’ Could Help With Conservation

A new study shows that tests of an animal’s adaptability and fear of the unfamiliar could contribute to conservation efforts. 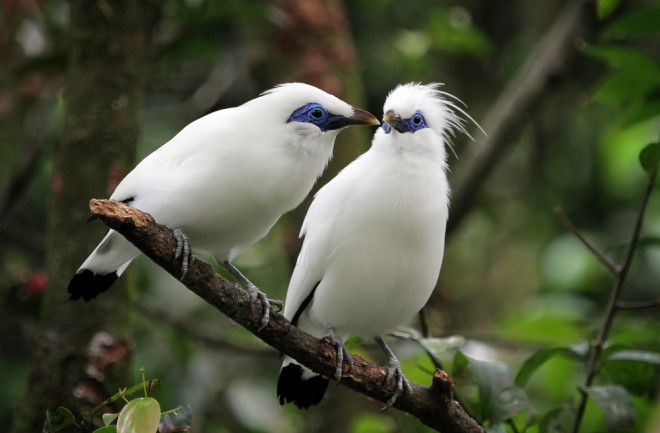 The Bali myna (Leucopsar rothschildi) is a bright white bird with brilliant blue splotches on its face and black tips on its wings and tail. Found only in a small mountainous region of the island of Bali in Indonesia, the bird is classified as “critically endangered,” with fewer than 50 individuals remaining in the wild.

This population has teetered on the brink of extinction since the 1990s, and biologists have studied the bird’s behavior attentively since then, all in an attempt to save the species from dying out. Now, a new study in Royal Society Open Science suggests that tests for understanding an animal’s adaptability and neophobia, or fear of new things, could contribute to the preservation of the Bali myna, as well as other populations of endangered species.

Saving a Species From the Brink

Biologists agree that the ability to adapt and to solve problems is imperative for an animal’s survival, especially in the face of modern-day urbanization.

"Behavioral flexibility, specifically how species and individuals within that species respond to novelty and approach new problems, is vital," biologist Rachael Miller of Anglia Ruskin University says in a press release. "Many species need to adapt to human-generated environmental changes."

In addition to adaptability, biologists also stress the need for animals to strike the proper balance between being weary and welcoming of change. "Neophobia can be useful in that it can help [animals] avoid unfamiliar dangers, but it can also impact their adaptation to new environments, such as through an increased reluctance to approach new foods," Miller says.

Based on the importance of these two traits, biologists have speculated that understanding more about an animal’s flexibility and tendency toward fear could inspire innovations in conversation strategies. In fact, Miller and a team of colleagues have posited that testing these factors could identify which captive individuals of an endangered species are best suited for reintroduction into the wild.

Testing out this speculation on the Bali myna, a species which benefits from captive breeding programs all across the world, the team assessed which birds were the best candidates for release based on their adaptability and fear responses.

"There is a need to continually release birds to try to boost the small, wild population," Miller says in a press release. "Now [that] we have data on the behavioral flexibility of these birds, this can help to inform which birds may be best suited for reintroduction."

To test the birds' suitability, the members of the team observed as 22 captive Bali myna solved simple puzzles and responded to familiar foods in the presence of unfamiliar objects. Their observations revealed that the birds that solved the problems quickest were most adaptable and most willing to touch familiar foods in spite of their strange surroundings, whereas the birds that struggled to solve the problems were not so willing.

According to Miller, the willingness to interact with the food was much more common in juvenile birds, making them better suited for reintroduction.

"Our study has already identified that releasing juvenile Bali myna may potentially be more successful than releasing adult birds, at least in terms of adaptability," Miller says in a press release.

In addition to identifying which individuals to release, the team says that the research could inspire new approaches for preparing animals for reintroduction.

"Our data can also help with developing training before release, where captive birds may learn to increase fear responses to traps or people, if they were to be introduced in areas where poaching takes place, or to decrease neophobia by exposure to unfamiliar safe food sources in areas with low resources," Miller says in a press release.

Ultimately, the findings could revolutionize the future of animal reintroduction. "We believe the overall project findings will be able to help not just the Bali myna, but hopefully many other endangered species," Miller concludes.