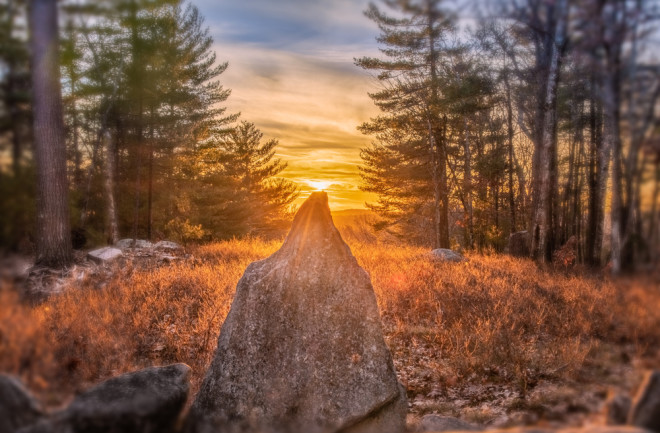 New Hampshire isn't called the Granite State for nothing. One thing my birthplace has in abundance is rocks. In its long history, New Hampshire has been the settling place of many peculiar and inert stony masses: the much-missed Old Man of the Mountain, weather-ravaged Mount Washington, and my big brother Doug, to name a few.

I love them all, but one conglomeration of rocks has captured my imagination — and a certain level of archaeological notoriety — for decades. I refer, of course, to the inscrutable landscape of stone and earth that locals still call Mystery Hill. You may know it as America's Stonehenge.

I became aware of the place at the age of nine, watching In Search of... the classic 1970s TV show hosted by Leonard Nimoy and devoted to unsolved mysteries and strange phenomena. One episode focused on Mystery Hill — a site of uncanny stone rings and structures whose very existence suggested to some minds the pre-Columbian presence of civilizations with advanced knowledge of architecture and astronomy, perhaps even a taste for blood sacrifice.

The episode featured commentary by Hans Holzer, parapsychologist and expert on phantoms and poltergeists. Apparently, Holzer also studied archaeology and ancient languages. Who knew? He confidently declared that markings on a stone at Mystery Hill — which looked an awful lot like scrapes from a farmer's plow, but never mind — were evidence of ancient Phoenicians in New Hampshire, centuries before the first European colonists.

It was just 40 miles from my house. I had to go. If this place elicited the curiosity of Mr. Spock and the greatest ghost hunter this side of Scooby-Doo, you knew it was worth a look.

And so it proved to be, when in 1977 I finally convinced my parents to visit Mystery Hill, located in Salem (but not that Salem). The stone chambers were spooky; here and there various rocks jutted from the ground at odd and unnatural angles. I was especially riveted by the so-called sacrificial table, a multi-ton slab with strange channels carved around the stone sides.

"That’s so blood can drain off," my brother helpfully observed. "I bet they killed lots of people here. Even kids." He eyed me thoughtfully, as if struck by an interesting notion.

Breathless travel writers and the destination's website itself describe the area as a maze, suggesting a vast, forbidding labyrinth hidden within a primeval forest, the kind of place one might venture into and never return. Although the site does sit on 30 acres of woodland, most of the stone structures occupy a comparatively small area. And while there are indeed winding paths and subterranean chambers dotting the landscape, it's no maze. You would have to be supremely inattentive or obtuse to get lost there.

My brother got lost there. We found him eventually, but our mom made an embarrassing fuss about it. So it took some convincing — and the passage of more than 30 years — to get him to return, which we did one pre-COVID summer not long ago.

Theories (Not Quite) Set in Stone

In fairness to my brother, plenty of other people have gone astray at Mystery Hill over the years. William Goodwin, an insurance executive who bought the property in the 1930s, believed that the stone structures there were built by Irish monks who somehow made it to America in the 11th century. He was so convinced of this "fact" that he made alterations to the site to suit his theory.

"[Goodwin] is documented as having 'rearranged' many of the stones on the property, so that it is not possible now to know what is original — if anything — and what is the result of Goodwin's work," says Curtis Runnels, a professor of archaeology, anthropology and classical studies at Boston University.

Later, a Harvard scientist named Barry Fell studied apparent inscriptions on stones at Mystery Hill and claimed these markings were Phoenician or Iberian in origin. Fell, it's worth noting, was a marine biologist, your go-to guy if you wanted to know about, say, sea urchins. But his forays into epigraphy were perhaps less accomplished and won him mostly skepticism and ridicule from the scientific community.

All we know for sure about the early history of the site is that it served as a homestead and a rock quarry in the 19th century, and that Native Americans were once active there, possibly for centuries. Nevertheless, amateur researchers, New Age devotees and the current owners continue to support the belief that America's Stonehenge's features are as old as 4,000 years, were built by prehistoric European visitors, and may even have some connection to the people who built Stonehenge on England's Salisbury Plain. In fact, the only link between America's Stonehenge and the real thing is the name itself, and that bit of rebranding didn't occur until the 1980s. Runnels notes that no verifiable evidence has ever turned up to support any of the wilder claims surrounding the site.

"There are no European artifacts such as metals or pottery at the site," Runnels says. "There are no European artifacts anywhere in North America dating to 2,000-4,000 years ago." In short, whatever happened on the ridge at Mystery Hill is not known for certain, but, Runnels adds, "Based on the available evidence — rather than unsupported conjecture — the various stone arrangements on the site were constructed by owners of the property in the 19th and 20th centuries and have no connection to prehistoric Europe."

A Walk Among the Rocks

On our return trip to Mystery Hill not long ago, my brother and I wandered in perfect solitude (at $13 a head, you might have the place to yourself, too). In the intervening years since our childhood visit, I had been to the real Stonehenge, and there was no comparison. No trilithons of towering majesty here. The stone walls and structures seemed smaller than I remembered, more like abandoned cellars than a temple built by an advanced people. Even the sacrificial table had lost its luster.

"Yup, that's probably a lye stone to make soap," my brother helpfully observed. He now owns an 18th-century farmhouse and knows a bit about Colonial-era tools, but experts have shared this view as well.

Does that mean Mystery Hill isn't worth a visit? Well, I wouldn't go that far. It's still a diverting walk in the woods — if you have kids, you could do worse than getting them out in nature in a place that is full of curiosities. Even Runnels acknowledges that the location holds some virtue. "It would certainly qualify as an archaeological site," he says. "In fact, there are two archaeological sites at Mystery Hill: Native American and Colonial American."

But if I had any advice for the current curators, it's this: Stick with the original name. Your hill is no Stonehenge, but it still holds plenty of mystery.