Both objects and behaviour can be described as disgusting. The term could equally apply to someone who cheats other people out of money as it could to the sight of rancid food or the taste of sour milk. That's not just a linguistic quirk. Some scientists believe that the revulsion we feel towards immoral behaviour isn't based on our vaunted mental abilities, but on ancient impulses that evolved to put us off toxic or infectious foods.

It seems that your facial muscles agree. Hanah Chapman from the University of Toronto has found that both physical and moral disgust cause the levator labii muscles, which run from your eyes to your mouth, to contract. The result: you wrinkle your nose and you purse your lips. Nasty tastes, gross photos and foul play all cause the same physical reaction and the same subjective emotions. When people say that moral transgressions "leave a bad taste in your mouth", it's more than just a pretty metaphor.

Chapman began by studying disgust in its more primitive forms - reactions to foul tastes. She recruited 27 volunteers and recorded the electrical activity in their levator labii muscles as they drank small vials of various liquids. If the concoctions were unpleasantly salty, sour or bitter, this group of muscles contracted more strongly than if the liquids were sweet or flavourless. These reactions were a good measure of their subjective opinions - the more distasteful they found the drinks, the more strongly their muscles contracted. 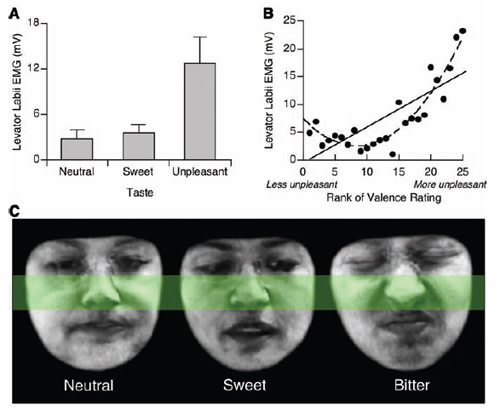 Disgusting photos elicited the same reactions even though no taste buds were actually being offended. When the volunteers saw pictures of faeces, wounds, maggots and other unhygienic visuals, their nose-wrinkling muscles contracted strongly, again in proportion to how disgusted they actually felt. Sad photos, or neutral ones, had no such effect.

So far, so predictable, but Chapman went on to show that our faces react in the same way to immoral behaviour. Humans value fair play and we frown at cheats and thieves. But do we wrinkle our noses at them? To find out, Chapman challenged 16 volunteers to an "Ultimatum Game".

The game's rules are simple - the players have to split $10, one of them (the proposer) makes an offer to the other (the responder) who can accept or reject it. Rejection means that both parties lose the money. Rationally, people should accept any offer greater than zero, since they'll get some money out of it. Realistically, most people choose to screw themselves over to deprive their partner of the profits, if they're offered less than a quarter of the pot.

The volunteers played 20 rounds of the game in the role of the responder, against either an experimenter or a computer. The offers were always randomly generated by a programme and ranged from an even split to a pittance of just $1.

The players always accepted fair offers that split the pot evenly and, as usual, the more unfair the offers became, the more likely they were to be turned down. And sure enough, their levator labii muscles followed suit. As offers became stingier, so this muscle twitched more strongly (B in image below).

To separate feelings of disgust from other emotions, Chapman asked the players after every round to look at photos of seven different facial expressions and rate how well the visuals summed up their feelings.The faces were taken from a standard set and designed to represent either disgust, fear, anger, contempt, sadness, surprise or happiness.

Unsurprisingly, as the offers became more unfair, the volunteers related less to the happy faces, more to the angry and sad faces and most of all to the disgusted ones (A). When Chapman tweaked the seven standard photos to show stronger or weaker variations of the same emotion, the players related most strongly to pictures of strong disgust, moderate anger and only mild sadness (C).

As before, the more disgusted the players felt, the stronger the contractions of their levator labii muscles (D). Neither anger, contempt nor any other emotion was related to the activity of these muscles (E,F). And of all seven emotions, disgust was the only one whose strength could predict a player's odds of rejecting an unfair offer. 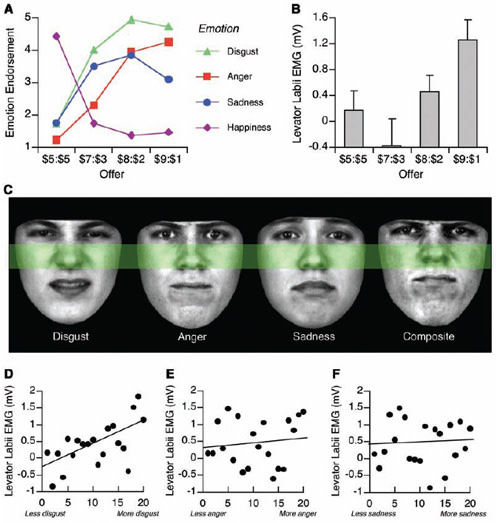 In both their subjective views and their reflexive muscle movements, the players were telling Chapman the same thing: when people are treated unfairly, they emotions they felt were most similar to their reactions to foul tastes or repulsive sights. Even though immorality leaves an abstract "bad taste" and bitter liquids leave a literal one, both trigger the same facial expressions.

Over a century ago, Darwin himself reckoned that our facial expressions are adaptations. The wrinkled nose and pursed lips that accompany physical disgust could serve to close off our senses from offending tastes and smells - a theory that was confirmed just last year by Josh Susskind, who also worked on this study. The new research provides more support for this idea but Chapman suggests that we have co-opted the protective function of disgust to shield us from social offences too.

Her experiments suggest that moral disgust is born from the same reactions that drives us to snub potentially dangerous foods. This impulse guards us and other animals from disease and poisons and it's an incredibly ancient one - even sea anemones will recoil from bitter tastes. During the course of human (or ape) evolution, this 500-million-year-old system could have been drafted to protect us from offensive social actions too.

In humans, the range of sensations that trigger feelings of disgust has been greatly expanded from the physical to the abstract world, but the reactions are still the same. Feelings of disgust lead to avoidance and withdrawal, so people could be literally treating unfair offers like plates of rotten food.