Show someone a piece of rotting food and their reaction will be visibly similar the world over. Their eyes will close, their noses will wrinkle and their mouths will tighten, all part of a universal expression of disgust. Darwin himself was struck by the universal nature of human facial expressions - from the busiest of cities to the most isolated of villages, smiles and frowns are recognisable, done in the same way and carry the same meaning. 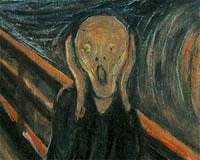 Facial expressions are massively important for the social lives of humans and it should come as no surprise that some parts of our brain are dedicated to interpreting the small shifts in facial muscles that betray our emotions. In this light, it makes sense that expressions should be universal, but that doesn't tell us why they take the form they do. Why is it a smile that indicates happiness and not anger, or why should wide eyes signify fear or surprise and not disgust?

A new study reveals part of the answer and shows that it's not an arbitrary fluke that certain emotions are tied to specific movements of our facial muscles. Joshua Susskind from the University of Toronto has found that expressions of fear and disgust are adaptive and serve to alter the experiences of our senses.

Fear creates a need for watchfulness to detect potential threats and fearful expressions help with this by widening the eyes and nostrils to increase the information available to the senses. The opposite is true for disgust, which is more about rejecting information that you don't want. And accordingly, disgusted expressions serve to restrict our perceptions.

Suskind first demonstrated the polar nature of fear and disgust by taking images of Japanese and Caucasian facial expressions from a large library. He plugged them into a well-known computer model that averaged out their features to create standard faces that epitomised different emotions. The model also worked out how the shape of these standard faces, and the way they reflect light, changes along their surface. It used this information to create the polar opposites of certain expressions - a set of 'anti-faces'.

Remarkably, the opposite facial expression to fear turned out to be very much like disgust, and vice versa, even to the eyes of impartial observers. A fearful expression is effectively the opposite of a disgusted one. The former is very much about expanding features like the eyes, nostrils and mouth, while the latter involves scrunching these up.

The eyes have it 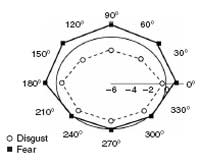 Suskind asked 20 students to make fearful or disgusted faces while looking at a large grid. He found that the students who pretended to be scared had a larger field of vision than normal, while the mock-disgusted students had a smaller view of the world. As a further test, Suskind asked volunteers to fixate on the centre of a projection screen, while a gray dot flashed ever closer to the centre of their field of vision. Again, expressions of fear gave the students the ability to spot the dot at a greater distance than expressions of disgust did.

Fear enlarges a person's field of vision but it also allows them to scan it more effectively using faster flicks of the eye called saccades. When volunteers had to rapidly switch their gaze between two small circles, the fearful ones moved their eyes much more quickly than their disgusted peers. 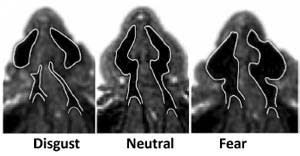 Sight is not the only sense that's affected - smell gets a boost from fear too. Using airflow meters, Suskind showed that people who look afraid can inhale larger volumes of air than normal, and MRI scans showed that this is due to a widening of their nasal passages. The same passages are sealed off by disgusted expressions, and inhalation volume falls as a result.

The results cannot prove that facial expressions once gave their wearers any adaptive benefits. But they do at least provide support for the idea that our expressions originally developed to modify our perceptions, an idea first proposed by Darwin over a century ago. You can see similar things in other primates, many of which reflexively close their eyes and flatten their eyes when they are startled.

Suskind suggests that these adaptive expressions were then recruited for the purposes of social communication. They have developed as social signals over the course of human evolution and have probably changed substantially during that time, for a variety of reasons. But as these experiments show, they still retain a vestige of their original purposes.