The right side of fair play

A stranger walks up to you and a friend and offers to give you both £100. As always, there is a catch - your friend must choose how to split the money between you. Accept his offer, and you both keep your respective shares; reject it, and you both come away empty-handed. Now imagine your friend offered you a single pound. What do you do? Most people would reject the offer to spite the friend. Even though you would financially better off if you accepted, you friend's proposal is unfair and rather insulting. Clearly, economic status is not the only thing at stake here. 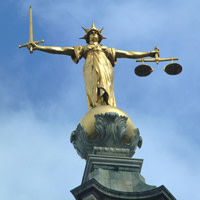 Psychologists use this 'Ultimatum Game' to investigate the role of justice in human interactions and the results are very consistent. Usually, people who are offered a quarter of the stake or less will reject it, even if the sum is several months' income (a rare case of justice triumphing over capitalism!)

Human beings seem to be strongly motivated by a social sense of justice. Those that play fairly are rewarded, and those that don't, like you friend here, are punished. Now, Daria Knoch and colleagues at the University of Zurich have discovered that this desire for justice is influenced by a small part of the brain - the dorsolateral prefrontal cortex or DLPFC - which constantly suppresses our more selfish urges.

Brain imaging studies have shown that this region is strongly activated when people play the Ultimatum Game, and especially when they receive unfair offers.The DLPFC is implicated in dealing with conflicting thought processes and allows us to plan our behaviour in order to reach a goal. Knoch and her fellow researchers believed that the DLPFC may allow a person to weigh up their desire for financial gain with their sense of fair play.

They tested their idea by using low-frequency magnetic stimulation to temporarily shut down this part of the brain while people played the Ultimatum Game. Usually, players only accepted the lowest possible offers about 9% of the time. When Knoch switched off the DLPFC on the left side of the brain, players became more tolerant and accepted low offers 15% of the time. In both cases, they took longer to respond to unfair offers than fair ones.

But if the DLPFC was inactivated on the right side of the players' brains, they became five times more likely to accept bogus offers. Forty-five percent of them occasionally took away even the lowest sums and for a third, every single offer was one they couldn't refuse.

When interviewed later, the forgiving players were completely aware that they were being hard done by. They just did not feel that it was worth turning down the money over. Tellingly, they took the same amount of time to respond to both fair and unfair offers. So the right DLPFC is not important for deciding if something is fair, but it is crucial for our ability to weigh up fairness with our own selfish materialistic impulses.

This balance only seems to kick in during situations where assessing fairness has a social impact. When Knoch pit her players against a computer instead of a human, they accepted low offers two in every three games, regardless of whether their DLPFC was active. While the gains are still low, there is little point in punishing an inanimate opponent and most people opt for the money instead.

Knoch's findings help to make sense of other studies of patients with damage to the right frontal area of the brain. Often, these patients have the ability to make normal judgments but lack the ability to react to them accordingly. Indeed, psychopathic disorders that involve excessive selfishness and a failure to conform to social norms tend to disproportionately involve damage to the right side of the brain. Together, these findings paint a picture that is reminiscent of childhood cartoons, with a devil on our left shoulder telling us to go down the selfish route, and an angel on our right shoulder, pushing us down the just one.