Goliath frogs and colossal crabs are walking among us. 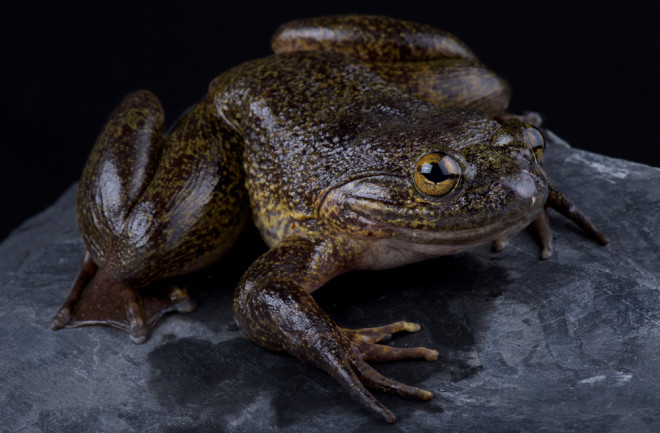 Throughout history, our planet has been home to some colossal creatures. From prehistoric animals, like dinosaurs and wooly mammoths, to today’s modern giants like blue whales and elephants. While there are large animals that most of us are aware of — whales, giraffes and gorillas — there are some giant animals you may have never come across and may not want to, for that matter. Here are five unusually large animals you probably haven’t heard of.

Scuttling around the tropical regions of Africa is one of the largest insects in the world — the Goliath beetle. These beetles can measure 2 to 4 inches long for males and 2 to 3 inches for females and can weigh anywhere between 2 to 3.5 ounces. Some can even lift 850 times their own body weight.

There are five different species of Goliath beetle, ranging in various colors from black and white to orange and brown. They eat mostly fruit and tree sap. And though it’s not deadly, a pinch from their powerful mandibles can draw blood.

One of the largest amphibians in the world, the Chinese giant salamander is considered a “living fossil” — an organism that appears to be unchanged from its prehistoric ancestors. They can grow up to 6 feet long and weigh over 60 pounds.

Chinese giant salamanders spend their entire lives underwater, absorbing oxygen through their skin. They typically live in rocky mountain streams and live on a diet of fish, frogs, insects and sometimes, smaller salamanders.

Unfortunately, these giants are critically endangered due to over-harvesting and habitat loss.

In the depths of the Pacific Ocean lives the otherworldly Japanese spider crab. They are the largest crustacean on the planet and one of the largest arthropods — an animal without an external skeleton, backbone and multiple jointed appendages.

These giant crabs can grow to a 12.5-foot leg span and weigh up to 42 pounds. They prefer to live in milder waters — about 50 degrees Fahrenheit — and live at depths ranging from 160 feet to 1,640 feet. They’re also known to live for nearly 100 years.

A relatively slow-moving animal, these crabs tend to eat deceased animals and plant matter. They have also been known to adorn their shells with sea sponges and anemones to act as camouflage.

The Goliath frog is the largest frog in the world. Typically found around rivers and waterfalls in western Africa, these colossal frogs can weigh over 7 pounds and measure 12.5 inches long. While these frogs can reach a substantial size, their tadpoles are the size of typical tadpoles and because they don’t have a vocal sack, they cannot croak.

Like the Chinese giant salamander, the Goliath frog has prehistoric roots tracing as far back as 250 million years. Goliath frogs typically eat insects, crustaceans and other amphibians. Unfortunately, this frog is endangered due to hunting and habitat destruction.

When you think of giant birds, some that may come to mind are the ostrich or maybe a swan. However, the wandering albatross is the largest when it comes to wingspan. This massive seabird has a wingspan of 11 feet. It can travel thousands of miles in a single trip. They can even go years without touching land, only occasionally landing on the water where they eat.