Your Brain in Real Time

Surgeons and scientists are teaming up to study living brains in action. 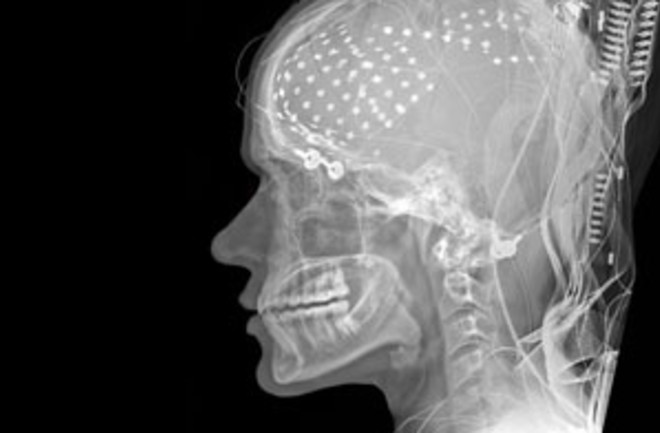 X-ray showing electrodes used to identify the source of epileptic seizures — and to study language in the brain. | <a href="http://www.nedsahin.org">Image: Ned T. Sahin, PhD</a>

Two decades ago, neurosurgeon Itzhak Fried of UCLA was stimulating a woman’s brain with electrodes that had been implanted before surgery to treat her epilepsy. He realized his patient was trying to tell him something, and as he bent down to listen, she mumbled that she had a sudden urge to shift her hand. Apparently an electrode had activated the part of the brain’s motor cortex that controlled the woman’s will to move. Fried realized that medical procedures like this one presented a rare scientific opportunity: Patients being examined for neurosurgery allow researchers to investigate the human brain in action, exploring the functions of different regions in precise detail and in real time.

These days, surgeons like Fried are increasingly partnering with brain researchers to take advantage of this access. About 30 such collaborations are currently under way. Although noninvasive imaging methods such as functional magnetic resonance imaging (fMRI) and positron emission tomography (PET) can track activity in the brain, they provide limited resolution. As Caltech neuroscientist Ueli Rutishauser puts it: “fMRI is like viewing a city from space. You can see the brightness of the lights and the number of inhabitants, but not what they’re doing or who is talking to whom. For that, you have to walk the streets yourself.”

The visceral exploration of living brain tissue is, in many cases, still the best way to unravel cognitive functions as diverse as language, memory, vision, and movement. Many of these studies piggyback on tests run on epilepsy patients. Sometimes brain scans fail to identify which regions need to be removed to stop epileptic seizures. If so, surgeons may implant electrodes to record neural activity, then keep the patient in the hospital for days or weeks until the next seizure strikes. With the consent of these wired-up patients, Fried and Harvard Medical School neuroscientist Gabriel Kreiman are conducting studies to investigate how the brain encodes visual information.

More than a decade ago, Fried discovered that individual brain cells seem to respond when a subject views images of celebrities or other well-known people. In 2008 his team reported that single neurons become active when a subject watches and recalls a 10-second video clip, suggesting that even complex episodic memories may be encoded in specific cells.

Near Fried’s lab, neurosurgeon Adam Mamelak of Cedars-Sinai Medical Center is teaming up with Caltech’s Rutishauser on a related project. Together they are testing epilepsy patients’ memories to reveal the brain mechanisms that underlie image recognition. Participants look at a succession of images, noting which ones they think they have seen already and rating how confident they are in their answers. Sometimes their brains contradict their words. “Even if a person incorrectly says they’ve never seen an image, the cells for familiarity still get it right and fire,” Mamelak says. “So there must be more to memory than nerve cells signaling yes or no. Now we can begin teasing that out.”

To go further, the pair started combining their electrode recordings of individual neurons with readings from an intracranial EEG, which measures overall electrical activity in a larger area of the brain. Mamelak and Rutishauser found that if a neuron’s response to an image synchronizes with a type of brain wave called a theta rhythm, the person is much more likely to remember what was shown. “I can predict whether you’ll remember, and how much confidence you will have in that memory, just by looking at whether a neuron fires in sync with the theta component of the EEG,” Rutishauser says. The result hints at new ways to treat learning disabilities and some forms of dementia. “There may be a window of learning during the brain’s activity,” Mamelak says. “Medicine or therapy might induce those rhythms and trigger better learning.”

Scientists are also using surgery patients to investigate the neural underpinnings of language. Neurosurgeon Mitchel Berger at U.C. San Francisco conducts hands-on “brain mapping” of language functions in advance of surgery to remove tumors. He electrically stimulates alert patients’ brains while having them make verbal responses. His top priority is to identify areas that must be protected when the tumor is removed, but his work is also creating a map of language-related activity in the brain. The findings may prove useful in a neural prosthetic engineering program that Berger launched last December with neuroscientist Robert Knight and engineer Shankar Sastry at U.C. Berkeley, which aims to treat motor and language problems.

In a similar vein, linguistic psychologist Steven Pinker recently teamed up with neurosurgeons and neurologists at Harvard University and U.C. San Diego to investigate the language functions of a small brain region known as Broca’s area. They implanted electrodes into that region in epilepsy patients and then had them read words aloud, either verbatim or altered from past to present tense (or vice versa). Neurons just a few millimeters apart were activated in rapid succession as participants identified words, applied grammatical rules, and finally spoke aloud. Such results are clarifying how the brain transforms the intention to speak into the action of speaking. The findings could also lead to a better understanding of disorders like Broca’s aphasia, in which people know what they want to say but have trouble getting their words out.amy barth

FMRI Imaging of blood flow in the brain to track which regions engage in a task.

Episodic Memory Type of memory that encodes experiences. May be rich with temporal, spatial, and emotional information.

Theta Rhythm Distinctive brain wave with a frequency of 3 to 8 cycles per second. Prominent in the hippocampus.