The line between normal perception and hallucination may be thinner than you think. 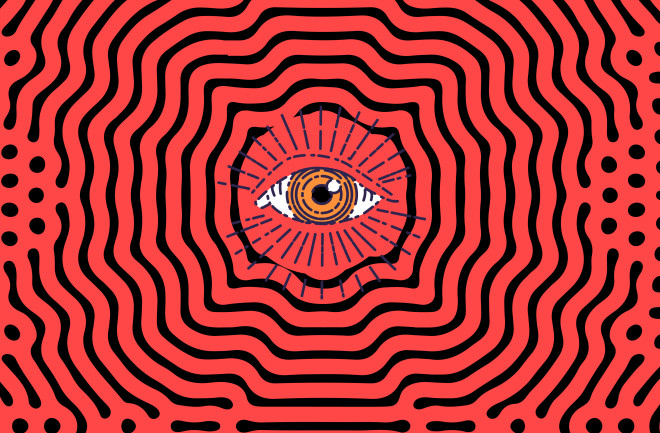 We usually associate hallucinations with mental illness or recreational drugs, but many mentally healthy people hallucinate with no help from psychedelics — maybe as many as 1 in 20 of us, according to at least one analysis. You’ve probably had them yourself. If you’ve ever heard a text alert only to find there was no message, or felt a phantom vibration in your pocket when you heard your cell phone ring from the table across the room, you’ve had a kind of hallucination.

“These sorts of experiences exist on a continuum, from the feeling that the phone has rung when you’re expecting an important call all the way to full-blown visual and auditory hallucinations,” says Philip Corlett, a cognitive neuroscientist at Yale University.

To understand hallucinations, we first have to take a look at how vision works. And it doesn’t work quite the way you may think it does.

From Eye to Brain

In its simplest terms, vision is essentially a collaboration between the eyes and the brain. Photons hit the retina and are then translated into neural signals. Eventually, these signals end up in the cortex, which is where most of our conscious visual processing takes place, explains Cristopher Niell, a neuroscientist at the University of Oregon’s Institute of Neuroscience. “You can think of the photons landing on photoreceptors as pixels on a monitor,” he says. But when you look out at the world, you don’t see a pixelated image. You see tables and chairs and trees and tomatoes. How does the brain get from a pattern of light on the retina to the real, 3D world that we navigate?

Your brain, Niell says, “does a series of almost mathematical operations on the image to pull out different features that are important for figuring out what’s there — edges, colors, texture, and so on.” This is not unlike what happens when the photo-editing program Photoshop identifies certain patterns to isolate a face in an image.

But there’s something else going on, too. “We have a lot of expectations about what’s out there,” says Niell. The brain matches these “pixels” to a pattern it expects to see. For example, let’s say there’s a shadow on the table, says Niell. Photons reveal only a dark area against the background of the table. But your brain knows that your hand is above the table, and it also knows that hands hovering over tables can cause shadows. So the brain interprets the dark area as the shadow of your hand. Because your eyes saw only a dark spot, your brain determines that it must be a shadow and creates a picture to match that interpretation. Or to put it another way, when you look down at the table, you immediately “see” a shadow there.

Filling in the Blanks

In a nutshell, that process explains what's happening in the brain when we see the world around us. But what’s happening when we see things that aren’t out there? According to Niell, some hallucinations are similar to what happens in an optical illusion. “The reason we misperceive [optical illusions] is because our brain has expectations about how the world should work,” says Niell. Our eyes see a pattern, but our brain fills in the details that tell us what it is, based on what it expects to see.

Expectations aren’t the only thing at work here, though. How tightly we hold onto those expectations and beliefs about our experiences are important, too. In a 2017 paper in Science, Corlett and colleagues found that an ability to update expectations in light of new evidence is important for staying on the healthy end of the hallucination spectrum. In the study, the researchers saw that people without mental illness were more likely to update their beliefs and expectations about reality (and therefore what they experienced) when presented with new evidence.

But not all hallucinations are a result of misinterpreting normal visual input. Niell and his colleagues at Oregon gave mice a drug that induces hallucinations. They expected the brains of the mice might show increased visual stimulation, that a vivid sensory scene was overwhelming the ability to interpret it. But that’s not what happened. In fact, there seemed to be less sensory information coming into the cortex when the mice were under the influence of the drug. “We realized, in retrospect, that this idea that hallucinations are a result of a mismatch between the information coming in and your interpretation of it can work either way," Niell says.

Dreams are another kind of hallucination that occurs when you have too little sensory input. “When you're dreaming,” says Niell, “there’s no sensory information coming in; your eyes are closed. Your brain is making up the whole thing.” The same thing, he says, happens when you’re walking in the dark. You don’t have good visual information, so your brain fills in the details. This might work just fine, or it might mean you leap two feet in the air when a cord on the floor momentarily appears to be a snake.

In both cases — either enough visual input, but misinterpreted, or too little input resulting in creative attempts to fill in the gaps — hallucinations can occur. And in both cases, what the eyes see isn’t exactly what the brain interprets.

This idea isn’t new, says Niell. Hermann von Helmholtz described something called unconscious inference theory in the late 19th century. “This is the idea that the information hitting our retinas isn’t actually what’s in the world. It’s just an image of it, and we need our brains to figure it out,” Niell explains. Or as the psychologist Gerd Gigerenzer once put it, “Perception is a kind of bet about what's really out there.”

'It’s Not All Out There'

So if all this is making you feel a little shaky about what’s real and what’s not, you’re not alone. When I asked Corlett what all this says about the nature of reality, he didn’t hesitate. “It’s not all located out there. A lot of it is constructed in our minds,” he says. “I’m quite fond of what my friend and colleague Anil Seth says about reality, which is that we're sort of all hallucinating most of the time. And when we agree between ourselves on the content of the hallucination, we call it reality.”

Corlett doesn’t go so far as to say that reality is a complete fabrication, but he does allow that it is in some way “constructed, inter-subjective, and consensual.”  So yes, hallucinating is perfectly normal. We do it all the time. If you ask some scientists, it's called experiencing reality.