You May be Experiencing Exercise Anxiety

Gymtimidation is just one form of exercise anxiety that could be keeping you from exercising. 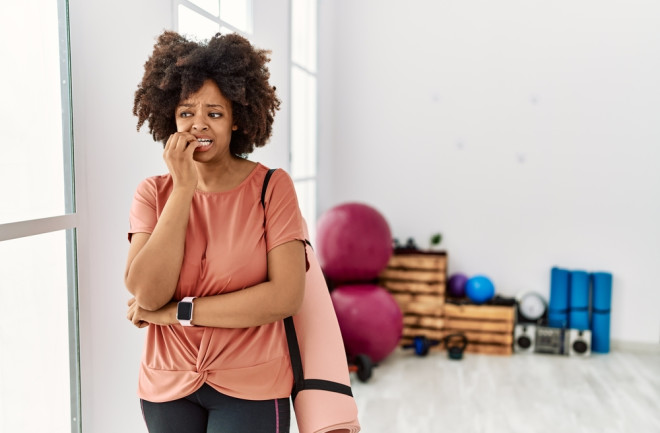 Swim class was a gym requirement when I was in high school in the 90s. We all dreaded wearing the required '50s style swimsuits — which were worn out, see-through, and worse, color-coded by size. They offered a commentary on our bodies at a time when we were already feeling self-critical.

As students, we had no choice but to endure the school-sanctioned humiliation. But even most adults have little interest in revisiting the anxieties associated with group or public exercise. A 2022 Center for Disease Control and Prevention study found that less than a quarter of American adults meet aerobic and muscle-training guidelines.

Social scientists have called anxiety about public exercise a "real fear." Researchers are learning more about exercise anxiety and the barriers that stop people from feeling the burn.

Read More: What is Anxiety and How Can Worries Overpower Us?

Many people who want to start exercising feel intimidated by gym regulars and worry others will judge their appearance or lack of fitness knowledge. Social scientists refer to this type of anxiety as "gymtimidation" and find it helps explain why many people pay for gym memberships but rarely visit.

Gymtimidation is a type of social evaluation fear, meaning that people worry about being judged by others while they exercise. Studies find these fears are complex and vary from one individual to the next.

A 2021 study in Well Being, Space and Society conducted ethnographic fieldwork at four gyms in England as well as in-depth interviews with 18 gym users and staff. The author identified common themes surrounding exercise anxiety.

Some people, for example, have "personal-level barriers" in which they dread the idea of being embarrassed through public exercise. They worry about making the wrong moves in an aerobics class or being scolded in the weight room for an etiquette breach.

Others articulated issues with "social-level barriers," including being judged for not knowing how to use the equipment or feel as though the staff had negative attitudes toward them.

"Environmental-level barriers" also kept people away from the gym. These barriers included overcrowding and concerns with how the gym was structured. A fitness center's bright lights and mirrors made people uncomfortable and felt like they were on stage while exercising.

The idea of being watched while working out can be stressful for many people, and researchers are finding it's greater among people with anxiety.

A 2019 article in the journal Mental Health and Physical Activity found that people with anxiety disorders tend to avoid exercise and there are complex reasons as to why.

In addition to experiencing symptoms of an anxiety disorder, participants also had to be between the ages of 18-65 and say they exercised less than 2.5 hours per week. After taking online screening questionnaires to gauge for specific anxiety disorders, 16 participants advanced to the in-person interviewing process. All of the participants identified as women; the mean age was 26.13.

All the participants had exercise anxiety, and the researchers were able to analyze their interviews and identify several emotional responses. The first, classified as cognitive, was an anxiety in which the person worried about being embarrassed during the workout. Participants feared they might be judged for doing exercises incorrectly or criticized for how they looked while they sweated or panted.

Another emotional response, categorized as physical, was an anxiety related to how the person might feel during the workout. Some participants worried about pain or feeling uncomfortable while they exercised. Others found that the physical sensations that came with exercising — sweating, panting and increased heart rate — mirrored the symptoms they associated with their anxiety disorders. The idea of these physical sensations was anxiety-inducing, and for some, avoiding a workout routine brought temporary relief.

Read More: Can You Predict a Panic Attack?

The study participants all reported having a negative experience that triggered their exercise anxiety, and they felt their exercise anxiety was compounded by their anxiety disorder(s). One participant, for example, stopped herself from going on walks because she worried she might fall and injure herself while outdoors. She considered walking in an indoor setting like a mall but didn't want to see people she knew while working out.

Participants, however, did describe social support as helpful. Having a friend to walk or take a spin class with helped reduce anxiety symptoms. But when that friend was no longer available, the participant stopped their exercise routine.

The authors concluded that although exercise can be a tool for anxiety reduction in some people, it can also be a great source of anxiety in others.

Apparently, my old high school officials also realized the same, and they stopped forcing color-coded swimsuits onto embarrassed teenagers. Sometime in the 2000s, the policy changed, and students were allowed to bring their own swimsuits to class.

More From Discover
Mind
How Does Alzheimer's Disease Lead to Death?
Technology
What Is a Social Media Cleanse?
Mind
Calming Kids With Electronics May Affect Emotion Regulation Skills
Mind
Can Playing Video Games Make You Smarter?
Health
Why Do Some People Live So Long?
Mind
What Is Emotional Blunting, and Do Antidepressants Cause It?
Recommendations From Our Store
My Science ShopDiscover STEM Kits
My Science ShopDiscover 2022 Calendar
My Science ShopStrange Science
My Science ShopElements Flashcards
Shop Now
Stay Curious
Join
Our List